Pure and sleek, the new PEUGEOT 308 is transformed into an ultra-sporty concept car with refined design of the highest quality. Its bodywork bears the hallmarks of sportiness and innovates with a two-tone treatment, combining red and black, with a clean line of separation.

Solidly planted on the ground, the 308 R Concept is powered by the engine of the new RCZ R, a real powerhouse of energy. Developing 270bhp, this 4-cylinder 1.6-litre engine has a record specific power of nearly 170bhp/litre, and CO2 emissions of just 145g/km.

"The new PEUGEOT 308, with its pure and sleek style, is a hatchback which carries the Marque's upmarket ambitions. The 308 R Concept radicalises this boldness and enriches the expertise of PEUGEOT Sport to obtain extreme sensations." Maxime Picat, Director General, Automobiles Peugeot 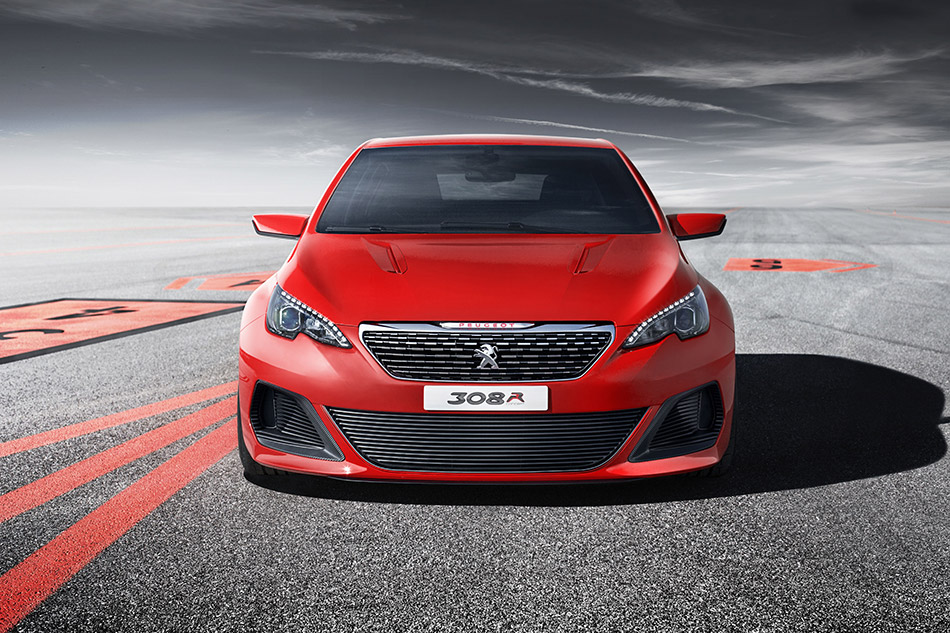 Immediately, the temperament of the 308 R Concept is clear. Its low posture, its wide track, its toned bodywork indicate simply its sports vocation while clearly linked with the new PEUGEOT 308. It retains the identity, the attention to detail, the sleek purity of lines of the production model while interpreting them in its own style.

Sportiness is in the genes of this radical concept car. It is fully-expressed with the identifying colours of this ultra-sporty world. The interpretation is innovative and unique. The front is plain red which has a fluorescent base for flamboyance. It contrasts with a textured blue-black at the rear. The oblique cut line is inspired by the Onyx Supercar Concept.

The special bodywork components that distinguish the 308 R Concept from the new PEUGEOT 308 is not separate but fully integrated. Made of carbonfibre, the doors, front wings, the body sides and sills, bonnet and bumpers are secured to the metal structure which retains only the roof and tailgate of the original.

The front face has an aggressive stance with three air intakes in the lower section. They stretch across the entire lower front panel, which covers a track widened by 30mm. The central intake consists of thin horizontal bars framed with a bluish Dark Chrome bead, while the side intakes are covered with a carbon mesh.  The frontal appearance looks purposeful, with ample capability to cool the 270 horsepower engine. This air flow radiates from the bonnet through two vents which take their form in the style lines in continuation of the body style lines that emanate from the radiator grille. It is finished with a bluish Dark Chrome bead surround, with an innovative treatment for its mesh design in a matt black chequered effect. Seen straight on, the perspective effect creates a strong and purposeful stance with the changed proportions emphasising the width of the car either side of the emblematic shaped grille.

The Full LED headlamps, taken from the new 308, characterise a feline appearance and are positioned within the lower front panel via its 3D ‘teeth'. The six groups of LEDs contribute to the determined attitude of the 308 R Concept. They initiate the muscular movement of the front wings and the shoulder line which connects them to the rear lights. This line extends the bonnet and body waist line in a fluid and dynamic stance.

Fixed in the overhead position, the exterior mirrors are finely shaped in carbonfibre. In spite of their extreme aerodynamic style, they incorporate the direction indicator with LEDs of a lean, distinctive design. The upper part accommodates the shell and the glass, the whole confirming that purity and radicalism go hand in hand.

In profile, the concept's posture is lowered by 26mm, emphasised by the body sills which have a matt black trim finish. They join the wheel arches curvaceously housing 19" bespoke wheels. On each wheel rim, the Lion is adorned in bluish Dark Chrome while one of the five spokes bears the signature ‘R' logo in plain red.

The light effect produced by the character line running across the doors adds to the dynamism of the vehicle by having the appearance of leaning forward.  From the side, the upper body is retained in its entirety as a reminder of the spacious passenger compartment of the new PEUGEOT 308. In this area, only the spoiler changes in length to provide more down-force at high speed, with detailing treated in a matt black finish.

At the rear, the 308 R Concept appears ready to pounce, like a cat focused on its prey. The PEUGEOT pyramid' shape of the rear, with its prominent haunches, places the vehicle firmly on the road.

The new 308 rear lights, with the three claws outlined by LEDs, emerge from the quarter lines interrupted cleanly by the widening of the wings. In addition, this leaves visible the pronounced stance of the rear, a promise of stability in this world of performance. Putting the finishing touches to this radical style with beauty, the two symmetrical exhaust tailpipes protrude through black lacquered trims, which frame the air vents. At this particularly furtive angle, a few components stand out. Dressed with a red signature are the lamps, the interior of the tailpipes and the interior surface of the spoiler to enhance its prominence.

The 308 R Concept is intended for incisive handling due to its compactness, its reduced overhangs and its lightness. To take full advantage of this, the driving position is ideal due to the new PEUGEOT i-Cockpit. Its pure design, full of character, promises a new kind of sensation.

"The PEUGEOT i-Cockpit is a major innovation for the motorist, who is more at one in the car. In an ultra-sporty vehicle, this is a distinct advantage." Vincent Devos, New PEUGEOT 308 Project Manager

For the driver, the controls are clear and simple as the steering is communicative. The compact dimensions of the steering wheel are a result of the overall weight-saving and enhance vehicle agility and increase the driving sensation. The instrument panel is positioned to be viewed over the steering wheel, not through, and is directed more in line with forward vision. With its very precise design, it makes reading the information much easier, and becomes instantaneous, with no need to take your eyes off the road ahead. Finally, the large 9.7" touch screen also brings the vehicle environment controls together for simple and intuitive ergonomics.

PEUGEOT Sport has developed the drive train and the suspension to create a concept car that will certainly thrill the occupants. Under the bonnet is a compact, highly efficient petrol engine that was recently launched for production in the new PEUGEOT RCZ R Sports Coupé. The engineers have succeeded in drawing 270bhp from its capacity of only 1598cm3. The resulting specific power is of a record level with nearly 170bhp/litre while offering emissions of CO2 at 145g/km. 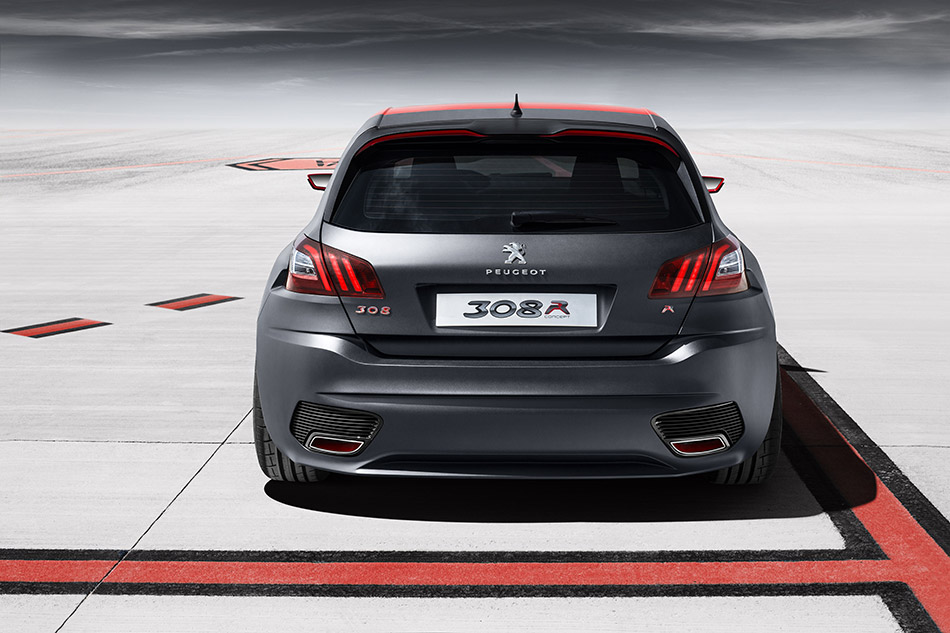 These evolutions allow the 1.6-litre THP 270 engine to develop its maximum power at 6000rpm with torque available over a very wide range of use (330Nm from 1900 to 5500rpm). The power is deployed to the front wheels through a six-speed manual gearbox and harnessed to fully exploit its potential through the front axle via a Torsen™ differential. Its effect is felt on acceleration, during braking, with an increase in stability, and when cornering, making it possible to maintain tight trajectories.

The 308 R Concept can count on a braking system equal to the performance achieved. The Alcon discs are of impressive dimensions: 380mm in diameter and 32mm thick at the front, 330mm and 22mm at the rear. Fitted on an aluminium hub, they are equipped with four-piston calipers and this remarkable braking power passes to the ground through 235/35 R19 tyres.

The PEUGEOT 308 R Concept is a radical sports show car which puts a new and exciting spin on the stylistic purity and identity of the new 308 production car.