Three years after its launch, the PEUGEOT 208 – the brand's best-selling model – benefits from a substantial upgrade to enhance and boost its appeal over the competition.

Though already an advanced and innovative design, the new 208 has been finessed in many key areas; with more assertive new styling, fresh exterior colour choices and an exciting range of personalisation options. New equipment makes driving in urban areas even easier, with safety, assistance and lifestyle systems like Active City Brake, MirrorScreen and reversing camera now available.

New PureTech and BlueHDi engines meet the latest Euro 6 emissions standards, with the world's most economical internal combustion engine offering record low CO2 at only 79g/km. The 208 range is also expanded with the ‘GT Line' and ‘GTi by PEUGEOT Sport' models. 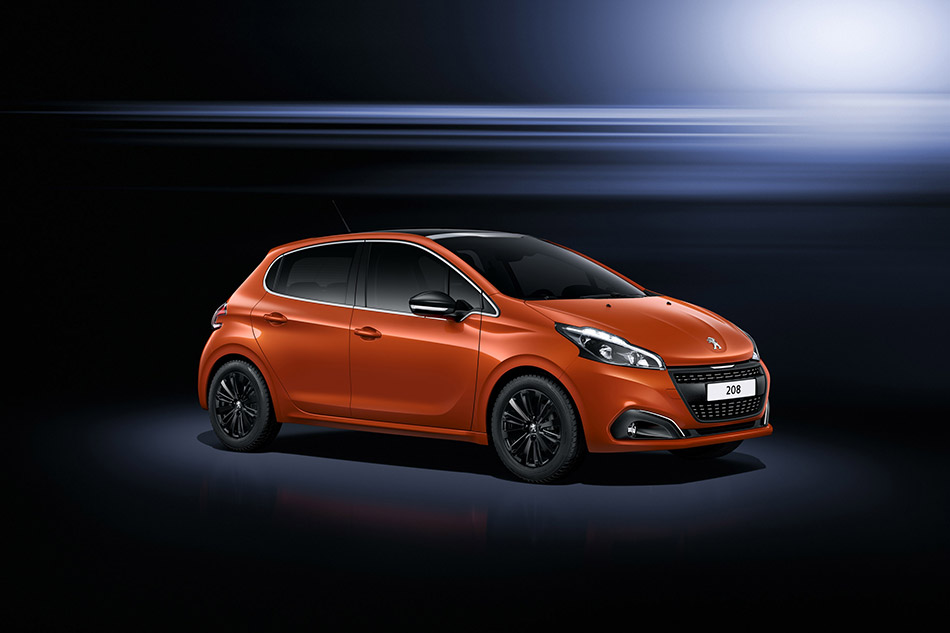 The most obvious upgrade is to the 208's styling, which is more assertive and distinctive. The new front bumper creates a sharper and more precise line, with a wider grille and deeper chrome finisher that is now fully integrated. The striking new look is supported by new two-tone headlamps, with black and chrome masks and a hi-tech LED light signature. These new headlamps are fitted as standard from Active trim level. When combined with separate front fog lamps, this fresh face creates a new identity which subtly transforms the vehicle, making it more dynamic and more aesthetic on the road.

At the rear, the full LED light clusters have been redesigned to incorporate Peugeot's 3D ‘claws' motif. In profile, the sculpted sides and chrome window surrounds of the 208 are retained. Enhancements include exclusive new 16 and 17-inch wheel options, available across the range. Illustrating Peugeot's move upmarket, they are available in a choice of painted, diamante or with innovative sequential diamante or laser engraved finishes. Chrome door mirror shells are now standard from the Allure trim upwards, strengthening the chic and desirable nature of the best-selling (most popular) 208.

When the PEUGEOT 208 was launched in 2012 it was the first opportunity for customers to experience Peugeot's new ‘i-Cockpit' cabin concept, which has since been adopted by the 2008 and new 308. Consisting of a compact steering wheel, head-up instrumentation panel and large touch-screen, it has been especially embraced by customers, who value its unique features and virtues.

Enhancements have been made to improve comfort and desirability of the 208 interior. The wheel is now trimmed in full-grain leather from Active trim, while the soft-touch moulded dashboard strip – which is standard regardless of trim level – has new graining on higher specification models.

Connectivity: better than ever

The 208's seven-inch touch screen remains standard from Active trim level, and provides intuitive and easy access to all systems including audio, navigation, telephone, vehicle information and internet. On-board connectivity using Bluetooth, USB and mobile applications via PEUGEOT Connect Apps has been upgraded to take account of the latest software improvements. Brand new to 208 is MirrorScreen, which makes it possible to transfer the screen of a smartphone to the vehicle's display, to make full use of its applications.

Access to apps depends on whether the vehicle is moving or stationary. While moving the driver can use apps created for driving such as navigation or infotainment. Compatible apps developed to date include iCoyote, Parkopedia, Glympse, and Sygic.

The PEUGEOT 208 was one of the first vehicles in the segment to make touch-screen technology and connectivity widely available. Its seven-inch screen is fitted to more than 80 per cent of versions sold since launch. It is also one of the rare hatchbacks in the segment to offer the option of Park Assist, an active system allowing the vehicle to park in and leave a parallel parking space automatically.

The revised PEUGEOT 208 maintains this lead by offering two new systems associated with urban use of the vehicle – Active City Brake and a reversing camera.

Active City Brake makes it possible to avoid an accident or reduce its seriousness if the driver fails to react. It works in urban conditions at less than 20mph. A short range sensor is fitted at the top of the windscreen and can detect other vehicles driving in the same direction or stationary.

The reversing camera, available as an option from Active trim level, uses the large colour screen to help orchestrate parking manoeuvres. This driving aid displays the outline of the vehicle and its trajectory by means of coloured lines, making manoeuvres safe, easy and intuitive.

Personalisation is a now a deciding factor in many small car purchases and PEUGEOT is embracing this with the revised 208. Available for the first time are exterior personalisation packs – such as Menthol White – which is a factory-fit option from Active trim level. Each pack comprises an Equalizer grille with stamped 3D-effect, gloss black grille finisher, gloss black front fog lamp finishers with laser engraved coloured line, coloured PEUGEOT lettering front and rear, Perla Nera black door mirror shells and coloured side repeaters.

The range of colours and paint finishes available on the PEUGEOT 208 has expanded with new colours. With a rich and varied palette of 13 colours, it meets a growing demand from customers looking for differentiation and exclusivity. Sure to grab headlines is the striking new metallic Orange Power, which is dynamic, young and fresh. 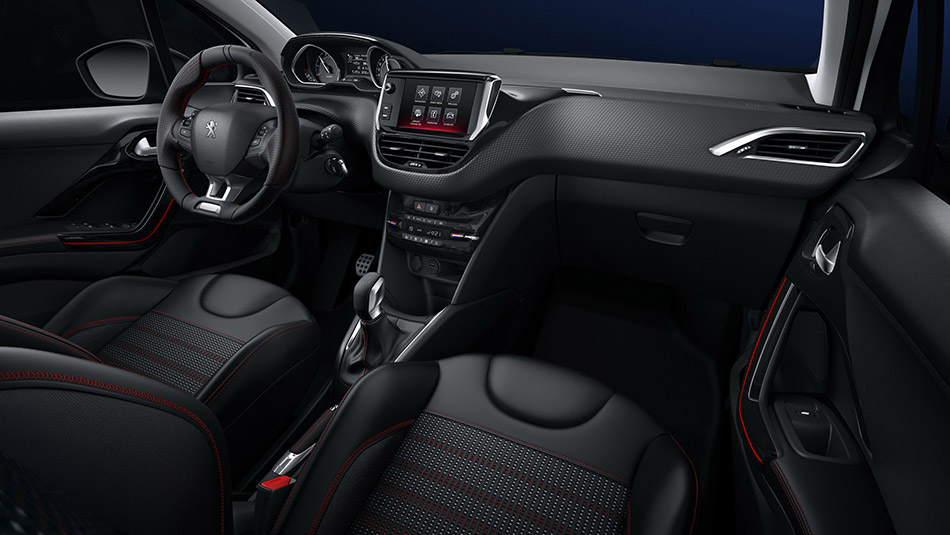 The revised engine line-up means all versions of the PEUGEOT 208 meet stringent Euro 6 emissions standards. BlueHDi technology is the most effective diesel emissions control system on the market and every version of the new 208 is below 95g/km of CO2. With the exception of the 75hp in entry level trim, all are equipped with Stop & Start (S&S) technology.

The 1.6-litre BlueHDi engines are now available with three power levels choices. The first two are the 75 and 100 S&S, which are coupled with a five-speed manual gearbox and capable of impressive economy at 94.1mpg - a record for the segment, and in the market. The third is the 120 S&S which is mated to a six-speed manual gearbox, which produces just 94g/km of CO2.

Modular and compact, clean and high-performance, this engine is a tour-de-force of efficiency and the latest technology. With a high pressure (200 bar) direct (cylinder) injection system, a new-generation high-efficiency turbocharger (operating at speeds of 240,000rpm), it offers driveability of the highest order in the market, and this from a very low engine speed.

The new PEUGEOT 208 is available from launch with the new EAT6 six-speed automatic gearbox, which uses Quickshift technology allowing for faster changes. With official CO2 emissions of 104g/km, the 1.2-litre PureTech 110hp S&S EAT6 will be the reference in terms of a petrol automatic transmission in its segment.

The revised PEUGEOT 208 continues its move up-market with the arrival of a new trim level specification – GT Line. Following the lead of the larger 308, it adopts many of the styling attributes of the iconic GTi model.

Available in three and five-door versions, 208 GT Line is available with a choice of three engines – the 1.2-litre PureTech 110hp S&S petrol or the 1.6-litre BlueHDi diesel in either 100hp or 120hp outputs. The GT Line finish is derived from the Allure trim and features an ‘Equalizer grille' with red 3D markings, a gloss black grille and front fog lamp finishers, with 17-inch Caesium diamante alloy wheels, Perla Nera black door mirror shells, chrome window surrounds and a chrome exhaust finisher. It has GT Line badges on the grille, front wings and tailgate, plus red PEUGEOT lettering front and rear.

Representing nearly 30 per cent of all registrations, the B-segment is the second largest in volume in the European market. Despite a multitude of different body styles, the compact hatchback remains very popular, accounting for two out of every three cars sold.

PEUGEOT continues to be a dominant player in this sector. Close to one million examples of the first generation 208 have been assembled at plants in Poissy (France) and Trnava (Slovakia). Together with the 2008 Urban Crossover, it made PEUGEOT one of the top three contenders in the segment across Europe in 2014.