Bringing the popular concept car to life, GM announced production of the Pontiac Solstice roadster as a 2006 model. The vehicle is expected in dealer showrooms in fall 2005.

First shown as a concept at the 2002 North American International Auto Show (NAIAS) in Detroit, the Solstice immediately gained a huge following, both inside and outside of General Motors. Designed from the ground up in less than four months, the 2002 Solstice concept car promised thrilling, open-air driving freedom in the spirit of the great roadsters of the past.

"True to the thinking behind the original concept, the production Solstice is all about being a ‘back-to-basics' roadster with gorgeous lines and fun-to-drive characteristics," said Bob Lutz, GM vice chairman of product development and chairman of GM North America. "The key enabler of Solstice is the new Kappa rear-wheel-drive architecture and component set, which allows us to rapidly and efficiently develop an appealing family of compact and affordable sports cars." 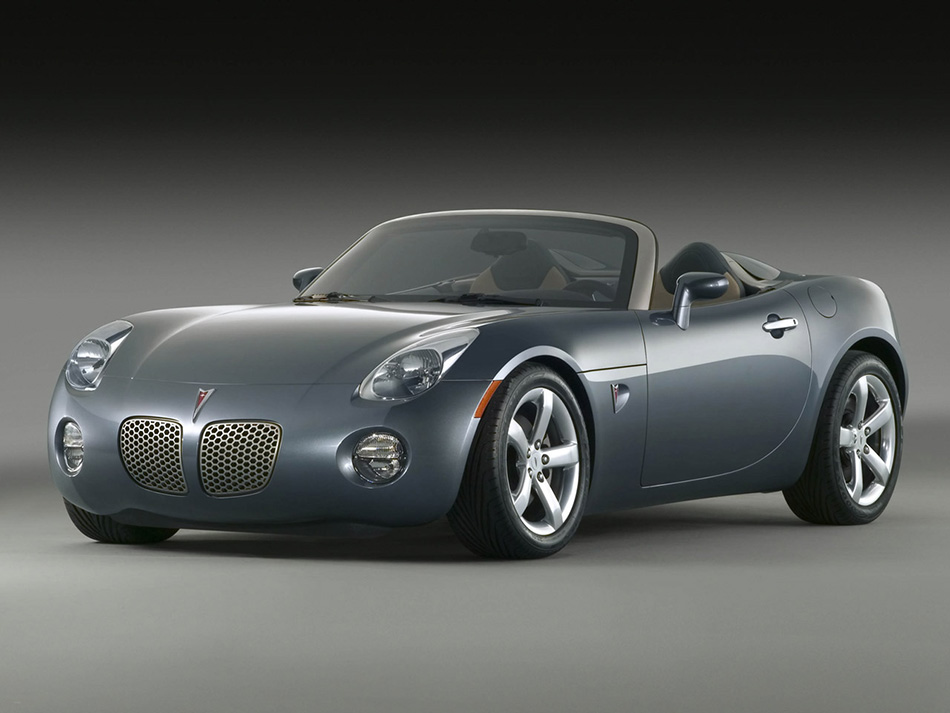 Strong response to the 2002 Solstice concept vehicle helped put the sports car on the fast track to production. But while the concept was designed with production-style elements, there was no compact rear-wheel-drive platform at GM on which to build it. Creating a production version of the concept vehicle required marrying the Solstice's curvaceous design to an entirely new performance body-chassis architecture.

To ensure an affordable, world-class driving experience, Solstice was created with a clever blend of all-new technology and proven GM components.
Solstice's power is created by a new 2.4-liter variable-valve version of the Ecotec DOHC four-cylinder engine, producing about 170 horsepower. Its twin-cam, multi-valve design provides stirring, high-revving performance, while the engine's lightweight, all-aluminum construction helps optimize the vehicle's front-to-rear balance. At the start of production, Solstice will be offered with a close-ratio Aisin five-speed manual transmission.

"With the concept vehicle, people immediately felt the emotional appeal of Solstice's design and back-to-basics philosophy - it's about performance, but in a fun, agile, affordable roadster," said Lynn Myers, Pontiac-GMC general manager. "All the stops were pulled out to make sure the production model delivers an exhilarating driving experience to capitalize on the ‘promise' of the Solstice's design."

Faithfulness to the concept can be seen in Solstice's proportions, which are comparable in terms of overhangs, wheelbase and track width. Independent front and rear suspensions that feature independent SLA designs with forged aluminum upper and lower control arms contribute to responsive handling. Monotube shock absorbers and coil springs contribute to uncompromised handling response and sporty driving characteristics while the wheels-at-the-corners wide stance enhances handling. Eighteen-inch wheels and tires are standard, as are four-wheel disc brakes.

The interior is oriented around the driver, with a clean design and intuitive controls. "The interior of the Solstice is surprisingly spacious, especially for a smaller car," said Lori Queen, vehicle line executive for GM's small cars. "We wanted to create a comfortable environment suitable for longer drives without sacrificing the ‘personal' feeling of a driver's car."

Designers worked carefully to transfer the clean lines and taut proportions of the concept vehicle to the production model.

"Put them side by side and it's very difficult to tell the production model from the concept," said Franz Von Holzhausen, design manager. "The front and rear fascias are slightly longer on the production model, but overall the car remains faithful to the concept - it's a minimalist approach that emphasizes proportion."

The Solstice's proportions are accented with five-spoke wheels and a low, wide stance. A dual-port grille and expressive lighting at all corners instantly identifies the car as a Pontiac. Unexpected details include a body-color extension into the passenger compartment that gives the Solstice an integrated appearance when the top is down. In fact, the top folds flat into the rear clamshell opening, providing a smooth seamless appearance.

"There is no visible stack from the folded top to disturb the shape," said Von Holzhausen. "In fact, there are no extraneous lines whatsoever; it has a tight, purposeful look, as if it were shrink-wrapped around the driver."

"We insisted on a lower ride height to ensure the car's sporty appearance," said Von Holzhausen. "That makes it the lowest, most ground-hugging car at GM. We were adamant that the Solstice look absolutely right from all angles."

Creative leveraging of GM resources, as well as clever solutions to other needs, helped complete the Solstice's design efficiently and economically. For example, the rear corner lamps are from the GMC Envoy, while door handles, fog lamps, seats, engine and transmission are shared with other GM vehicles.

However, some parts are all Solstice. The taillamps, for instance, were designed with special reflectors to eliminate the need for a separate side marker light. This not only contributes to the car's sleek design, but also eliminates the cost of a separate marker lens and bulb.

Interior design is equally purposeful and clever, with details like pedals placed for easy heel-and-toe driving and a cockpit-style instrument panel that sweeps around the driver. Designers also worked with chassis engineers to optimize the placement of the shifter. Manual shifter throws between gear changes were studied and shortened.

"When you sit down in the car, your hand naturally falls onto the shifter," said Vicki Vlachakis, interior designer. "It's a very intuitive, comfortable environment, and the feel of the shifter between gears is very short and precise. Designers and chassis engineers worked together to tune the best placement."

"Solstice is a vehicle that captures the passion and pleasure of open-air driving," said Myers. "Everyone at GM recognized that adding it to Pontiac's portfolio would make another strong statement about Pontiac's renaissance."

Its fast-track approval and development process come on the heels of a similar rapid decision process that helped launch the 2004 GTO in 18 months.

"The GTO and Solstice complement each other by offering ‘book-end' approaches to Pontiac's performance offerings," said Myers. "Like its V-8 powered stable mate, Solstice adds another dimension to a growing lineup of clean, uncompromising performance vehicles."