Building on its ongoing commitment to the aftermarket tuner enthusiast, GM of Canada worked closely with the industry's most notable tuners in the country to take a stock Pontiac Solstice to the tuning extreme, creating the Top Tuner Solstice.

Projected to have a street value of $500,000, the Top Tuner Solstice combines the best in personalization and customization, including Sound, Speed, and Style. With over 30 companies from across Canada participating in this project, the Top Tuner Solstice is the talk of the aftermarket industry. This was more than evident when the Top Tuner Solstice debuted at the 2006 SEMA Show in Las Vegas where the vehicle set records receiving an award in each of the three competitions at the show. These included the Mother's Polish Shine Award, Sony Playstation Gran Turismo Award ("Best Domestic") and the General Motors Design Award ("Best New Product") for producing a completely new vehicle on a brand new platform. 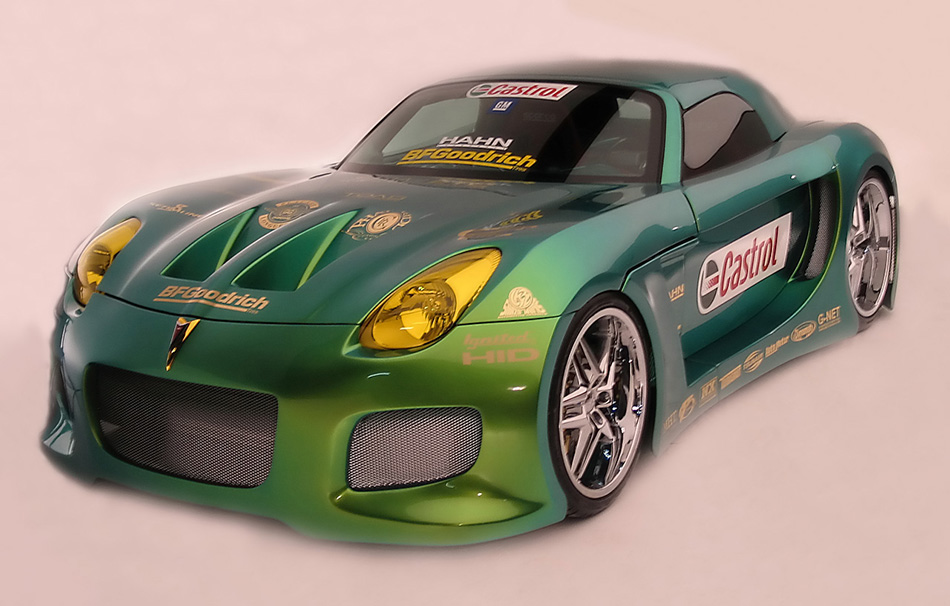 The Evolution of the Top Tuner Solstice

For the first time ever, the best-of-the-best in Canada were assembled into one team to pour their collective passion and energy into one vehicle that captures the extreme essence of the Pontiac Solstice.

With only four months to complete the overhaul, award winning Torontonian tuner Tajai Das from Elite Tuners of Canada, was the project lead on this industry first project. Known within the industry as the master behind the award winning 1994 Acura Integra "Acurabot", Das recruited five tuners that have risen to the top of the tuner scene, each to handle a specific stage of the Top Tuner Solstice

Known for his Candy Orange right hand drive Cobalt SS-SC, Keith Losier from Desired Customs in Niagara Falls, Ontario applied his expertise to create a custom Pioneer audio/entertainment system to be the envy of anyone yearning for the latest and cutting edge in-car-entertainment.

As for the interior, Vito Ianniciello from Seam Line in Woodbridge, Ontario designed and installed a completely re-upholstered red suede interior that runs from the passenger cabin into the trunk well containing the subwoofer system.

Known in the industry as the go-to for the best in custom fabrication, Chris Nankoo from Phat Custom Rides in Montreal, Quebec created a one the one-of-a-kind custom exterior body kit for the Top Tuner Solstice. Chris took the time and effort to create the molds necessary to fabricate a custom fiberglass hardtop, fiberglass hood, and a widebody ground-effects kit for the vehicle.

For a truly one of a kind paint job, Serge Leger from Henry's Auto Body in Shediac, New Brunswick mixed a custom paint job with high gloss candy coated application called Vivacious Candy Green that no other paintshop in Canada offers.

Headquartered in Oshawa Ontario, General Motors of Canada employs 19,000 people nationwide. GM of Canada manufactures a variety of vehicles, engines, transmissions and other components, and markets the full range of General Motors vehicles and related services through 759 dealerships and retailers across Canada. Vehicles sold through this network include Chevrolet, Buick, Pontiac, GMC, Saturn, Hummer, Saab and Cadillac.