At the North American International Auto Show in Detroit today (13 January), Porsche is presenting the latest addition to the iconic 911 sports coupé family: the 911 Targa. While enthusiasts will recognise cues from the classic Targa concept, pioneered by Porsche in the late 1960s, this latest model is the first to combine state-of-the-art open roof technology with the distinctive coupé appearance.

Just like the legendary original 911 Targa model, the new model features a characteristic wide bar in place of the B-pillars aft of the doors, a movable roof section above the driver and passenger, and a wrap-around rear window -- with no C-pillar. But, unlike the classic models, the roof segment of the new Targa can be opened and closed at the push of a button. When the button is pressed, the fully automatic system stows the roof top behind the rear seats, providing a real spectacle.

The rear-biased Porsche Traction Management (PTM) all-wheel drive fitted as standard is a further typical dynamic Porsche feature, and guarantees that the latest 911 Targa also offers optimum driving dynamics on all road surfaces and in all weather conditions.

With these features, the new 911 Targa presents itself as a high-quality, innovative reinterpretation of the classic first edition from 1965. The model shares a great deal in common with the 911 Carrera 4 Cabriolet models; up to the window line, the technology and body of the vehicles is virtually identical. The combination of the wide rear body that is typical of all-wheel drive 911 models, the Targa roof bar and the dome-shaped rear window create a low-slung profile that gives the latest 911 an extremely sporting appearance. 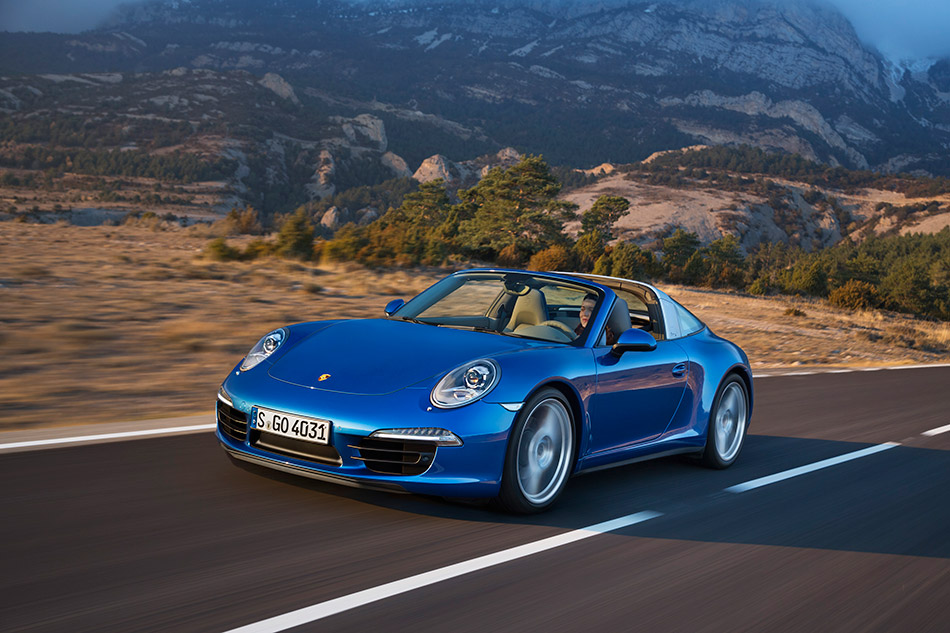 The Targa roof system has always been a distinctive hallmark of this 911 model. The new 911 Targa continues this tradition with a particularly innovative roof concept. The roof is made up of two movable parts: a soft top and a glass rear window. The rear window, which is attached to the convertible top

compartment lid, is opened and tilted at the push of a button. At the same time, two flaps open in the Targa bar, releasing the soft top's kinematics. The convertible top is released, folded into a Z-shape as the roof opens, and stowed away behind the rear seats. A stowage area running across the car behind the rear seats accommodates the convertible top. Once the top has been stowed, the flaps in the bar close and the rear window moves back in to position once again. The roof takes around 19 seconds to open or close using the buttons in the centre console – and can be operated only while the vehicle is stationary. A wind deflector integrated in the cowl panel frame can be erected manually when the top is down. This deflector reduces drafts and buffeting in the interior by a considerable margin, should this be the driver's preference.

The materials used in the roof system are just as innovative as the concept itself. The premium quality fabric hood is stretched particularly taut by the magnesium roof shell and panel bow. An additional sound absorber beneath the convertible-top covering has a thermal-insulating effect and reduces road noise when the roof is closed. The rear edge of the soft top connects up to the fixed Targa bar, which features steel roll-over protection on the inside and painted cast aluminium elements on the outside. The three gills and ‘targa' lettering on the sides of the bar are a subtle leitmotif inspired by the original 1965 Targa model.

The rear window, which is made from extremely lightweight laminated safety glass, consists of two layers of thin, partially pre-tensioned glass separated by a film interlayer. The very fine heating elements on the heated rear window cover almost the entire surface of the glass, ensuring exceptional all-round visibility even in unfavourable weather conditions.

Inside the cabin, the front roof element is lined with black fabric, which, together with the black Alcantara interior trim of the Targa roof bar, gives the interior a harmonious appearance. The convertible-top compartment is situated behind the rear seats. This compartment, together with the transverse strut, serves to harmoniously integrate the stowed convertible top into the cabin. Even with the roof closed, the large, curved rear window allows plenty of light into the interior, providing a notable feeling of space. 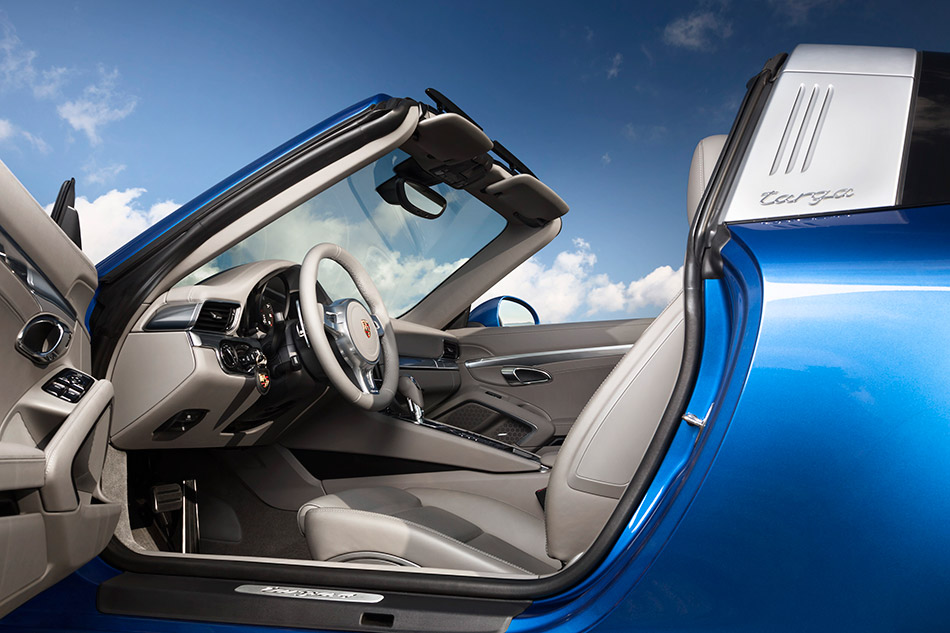 As with the prior model, the new Targa comes in two versions available exclusively with all-wheel drive. A seven-speed manual transmission is fitted as standard. The 911 Targa 4 is powered by a 3.4-litre, 350 hp (257 kW) flat-six engine. Equipped with the optional Porsche Doppelkupplung (PDK) double-clutch transmission and Sport Chrono Package, this model can accelerate from 0 to 62 mph in just 4.8 seconds and on to a top speed of 175 mph. Fuel consumption on the NEDC is between 29.7 mpg and 32.5 mpg Combined, depending on transmission, which corresponds to CO2 emissions between 223 and 204 g/km.

The top model is the 911 Targa 4S, which delivers 400 hp (294 kW) from a displacement of 3.8 litres. This model reaches a top speed of 184 mph and, with the PDK and Sport Chrono package options specified, is able to accelerate from 0 to 62 mph in 4.4 seconds. Fuel consumption on the NEDC is between 28.2 mpg and 30.7 mpg, depending on transmission, which corresponds to CO2 between 237 and 214 g/km. These figures place the model on a par with the high standard set by the 911 Carrera 4 Cabriolet models in terms of engine and road performance, as well as efficiency. Furthermore, both sports cars are certified for compliance with the Euro 6 emissions standard.

Fitted to every 911 is a Porsche Vehicle Tracking System (VTS), a sophisticated vehicle security package approved to Thatcham Category 5 standard, and customers will also be able to explore the potential of their new car by participating in a complimentary course at the Porsche Experience Centre, Silverstone.

The history of the Porsche 911 Targa

Porsche unveiled the 911 Targa, the world's first ever ‘safety Cabriolet', in September 1965 at the International Motor Show (IAA) in Frankfurt, Germany. With its fixed roll-over bar, removable folding roof and hinged rear window, this new variant was developed primarily in response to increased safety legislation in America. The name ‘Targa' comes from the famous Targa Florio race and since the mid-sixties has been synonymous with the open driving concept, which was new at the time.

Production of the vehicle began towards the end of 1966 with the market launch of the 911 Targa taking place in 1967. The Targa cost 1,400 Deutschmarks more than the Coupé. This roof concept was enhanced from one 911 generation to the next over a period of 27 years. During this time, this ‘semi-open' variant acquired the status of a stand-alone vehicle concept in the Porsche range, becoming the model of choice for one in ten 911 buyers. 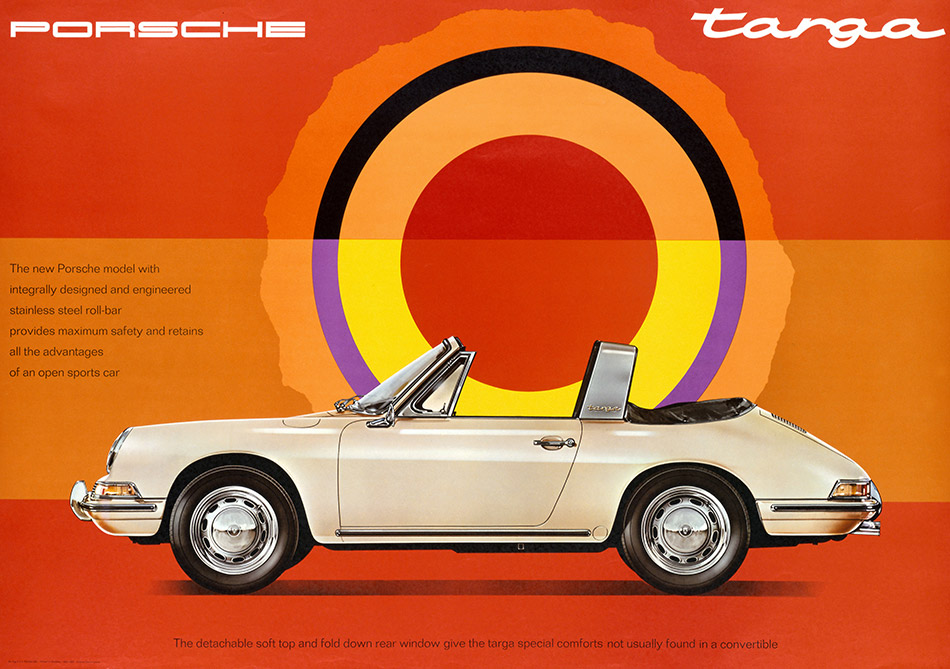 For the 1996 model year, Porsche presented a fully revised version of the 911 Targa (‘Type 993'). The entire roof was made of glass, with a sliding glass cover above the driver and front seat passenger that could be lowered and retracted beneath the hinged rear glass window.

Precisely 20 years after the last 911 Targa with the classic roll-over bar style (based on the ‘Type 964') was discontinued, the latest ‘Type 991' generation of the 911 Targa once again takes this unique design concept into the future.