Porsche has given the massive Cayenne a "baby" SUV sibling with the name "Macan", which was presented last November and is being marketed since the spring season. If the hybrid extreme athlete 918 Spyder that was manufactured in limited edition is not included, the current type portfolio of the manufacturer from Zuffenhausen now counts to a total of six model series: Boxster, Cayman, 911, Panamera, Cayenne and the new Macan.

Of course, as a proven manufacturer of sports cars, Porsche has set maximum driving dynamics as a top priority in its performance specifications, for its development engineers also for Macan that is manufactured on the basis of Audi Q5 platform. This is already underscored by the range of engines available to Macan, which for the time being, begins with the 258 horse power-strong Macan S Diesel through Macan S with 340 horse power up until 400 horse power for Macan Turbo, which presses into the drivetrain. By the way, the latter designation is slightly misleading since ALL Macan engines are subjected to artificial respiration by at least one turbo charger. 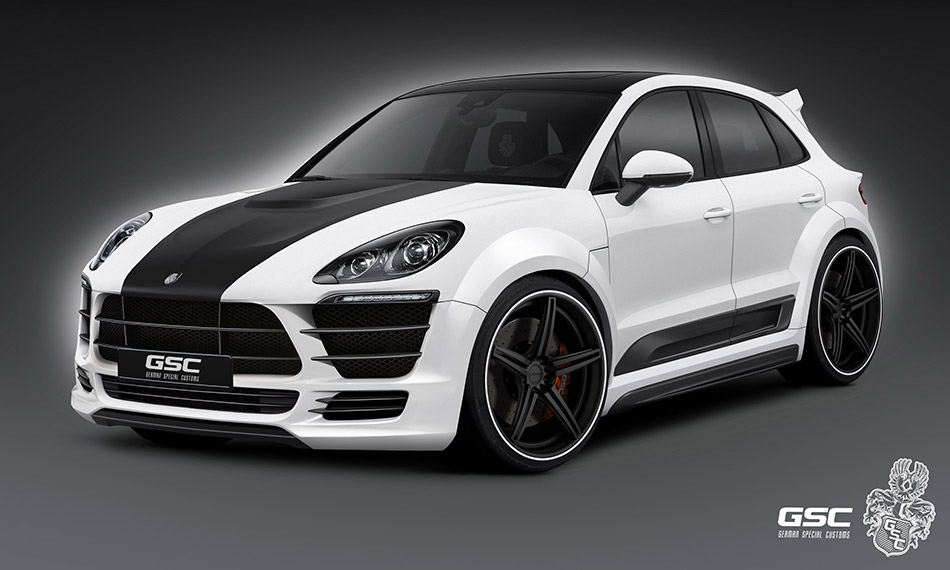 Of course, Macan that is already massively built and designed under factory settings is – under these conditions – also an ideal starting point for the creative works of the guild of tuners and the world should expect national and international refiners to roll out their Macan projects in the limelight pretty soon.

The styling specialists of the exclusive tuning label German Special Customs – short GSC – from Chemnitz has already now, offered a highly promising outlook for the company's own interpretation of the Swabian sports SUV.

GSC has virtually tailored a spectacular wide body construction kit for the Macan bodywork. For instance, the factory-made cooling air inlets that are already quite distinctive in the front of the Macan are appearing even much more conspicuous in GSC's draft model in such a way that that the Macan now looks like it simply seeks to completely "suck-in" the road surface in front of it as well as the vehicles running on it. The engine hood has a distinctive power dome that has boosted the prestige of overtaking into immeasurable dimensions.

The pronounced mudguard extensions offer Macan the masculine shoulders of a well-conditioned bodybuilder. The extensions are connected by massive side skirts and door fixtures so that the idea of a "wasp waist" doesn't come up at all.

Even the "rear part" of Macan has been extensively redesigned by GSC: In addition to a huge roof spoiler, the refiners endow the Porsche with a brand-typical rump and a massive rear apron with air outlets on the rear wheels as well as a massive diffuser. GSC will offer different wheel/tire combinations in diameters of up 22 inches for the wheelhouses.