To mark the 50th anniversary of the 911 Targa, Porsche is offering this very popular model in the more powerful and dynamic GTS version for the first time. The targa concept of the 911 Targa 4 GTS delivers very safe driving enjoyment with all-wheel drive and a rollover protection bar; it also delivers open-air fun with a targa top that stows fully automatically.

Contributing to a boost in dynamic performance are the 430 hp (316 kW) GTS engine together with the standard Sport Chrono package, PASM chassis, 20-inch wheels and a sport exhaust system.

Despite its significantly extended features, the weight-to-power ratio with the 430-hp engine was improved from 3.9 kg to just 3.6 kg per horsepower compared to the S model. This lets the Targa 4 GTS reach a top speed of over 300 km/h (186 mph) with a PDK transmission, and the stopwatch records 4.3 seconds for the sprint from zero to 100 km/h (0 - 60mph in 4.1 seconds). Although the engine produces an additional 30 hp (22 kW), its combined fuel consumption - which ranges from 9.2 to 10.0 l/100 km, depending on the type of transmission - is exactly the same as for the 911 Targa 4 S. 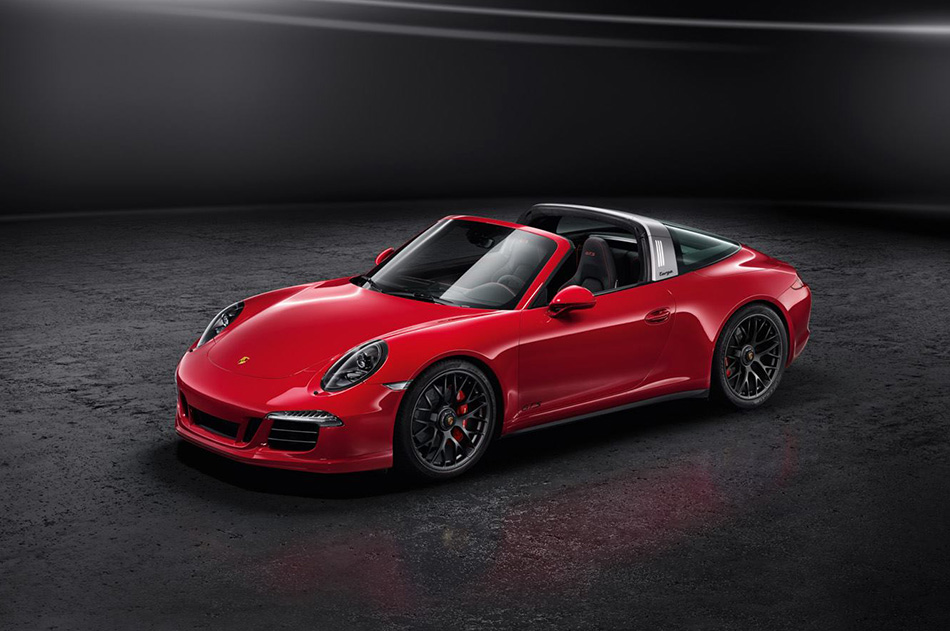 The latest Targa can be made out at first glance as a GTS model with all-wheel drive, because - compared to the two-wheel drive 911 Carrera models - the rear wheel arches are flared an additional 22 millimeters, and the rear tires are ten millimeters wider. The front view is defined by the sport design of the car's front end with an opening for the auxiliary middle radiator and the smoked bi-xenon headlights that feature the Porsche Dynamic Light System (PDLS). In a side view, characteristic GTS attributes are the silky gloss black 20-inch 911 Turbo S wheels with central locks, the sport design door mirrors and "GTS" signatures on the doors. The "targa" logo on the silver rollover protection bar is also painted in silky gloss black. Black accents at the rear are the glossy trim on the air inlet screen, the model logo and the chrome tailpipes.

GTS DNA also defines the interior of the 911 Targa 4 GTS. Integrated at the center of the instrument panel is the stopwatch of the Sport Chrono package. In the front, the four-way adjustable Sport Plus seats - with their black GTS logo on the head restraints - provide additional lateral support and long-distance cruising comfort for driver and passenger. The dominant interior material is black Alcantara, which is just half the weight of leather.

The targa has been an established member of the 911 lineup since it made its debut back in 1965. Around one out of eight 911 cars ever sold was a targa. The market share of the latest generation of this exquisitely styled 911 with its characteristic rollover protection bar is 13 percent - and it is growing. With the 911 Targa 4 GTS, Porsche is extending its lineup of the modern classic by adding a top model whose extensive package of standard features and price are appealing.

The Porsche 911 Targa 4 GTS will be launched in Germany from mid-March 2015. The price is 137,422 Euro including value added tax and country-specific features.