Renault Wind has head-turning looks. Its blue-tinged gaze, muscular profile and rear-end forms, give it an emphatically modern profile. Unique styling details include the roof-cover cowls, chrome exterior door mirror housings and badging on the side which recalls the rotational movement of the roof-opening mechanism. Meanwhile, there is an unmistakable ‘cockpit' feel about the interior. The instruments are reminiscent of the world of motorbikes, the sport seats feature integrated head rests, while the low-set driving position and sporty layout of the controls are typical of roadsters.

The expertise of Renault Sport Technologies (R.S.T) in the realm of motoring enjoyment needs no introduction, and Renault Wind has benefited extensively from the expertise of R.S.T's engineers. The new coupé-roadster is built on the same platform as Clio 2 R.S., and its chassis is perfectly suited to the power outputs of the two engines that are available for the car, the TCe 100 and the 1.6 16V 133hp. One of the chief accomplishments of R.S.T's engineers is the fact that they have achieved the best weight to body-rigidity ratio for a coupé-roadster, allowing Renault Wind owners to profit from an outstanding ride plus very low fuel consumption and CO2 emissions. 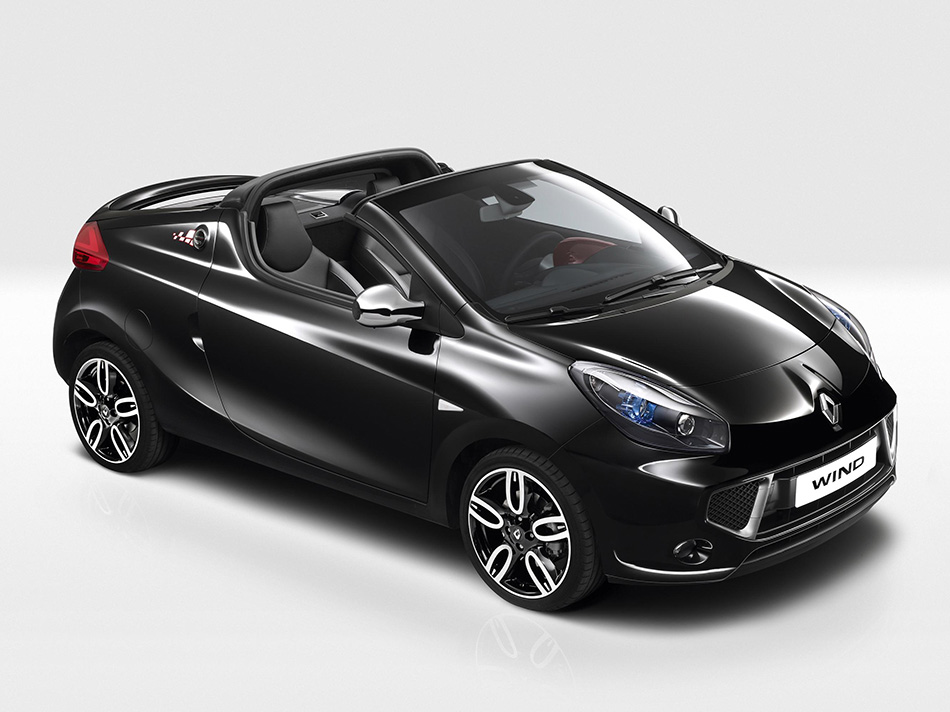 Renault Wind takes full advantage of Renault's expertise in the fields of active and passive safety too, while the excellence of its chassis and its powerful brakes ensure exceptionally reassuring handling. Renault Wind will go on sale in July 2010 in the United Kingdom and Slovenia, and from September in its other western European markets.

When it comes to this type of car, exterior styling is the chief factor in the purchase decision. Therefore, to appeal to its market, Renault Wind's design needed to be both dynamic and robust, as well as unmistakably modern. Seen from the side, Renault Wind's sporty, robust lines, steeply-raked bonnet, high waistline, extensively sculpted flanks and integral roll hoop immediately strike the eye.

The two roof-cover cowls located in the slipstream of the head rests are distinctive roadster features and form a natural link between the interior and exterior. Work on the windscreen header-rail, which sits in a far more forward position than that of rival convertibles, heightens the pleasure associated with open-top motoring and further underpins Wind's roadster credentials. The rear end incorporates a distinctive wing which forms part of the boot lid, while the boomerang-shaped rear lights provide a readily identifiable lighting signature.

There is an unmistakable ‘cockpit' feel about Renault Wind's interior which has been designed to heighten the sense of motoring enjoyment through a host of sporty cues. These include sport seats with integrated head rests, full instrumentation set in profiled tunnels and a translucent instrument panel cowl (red or black) that recalls the world of motorbikes. The Dark Charcoal ambiance is set off by the door pulls, aluminium pedal covers, sports steering wheel and a range of satin-finish chrome details that highlight Renault Wind's unique coupé-roadster appeal and irresistibly tempt you to open the roof and head off for the country! 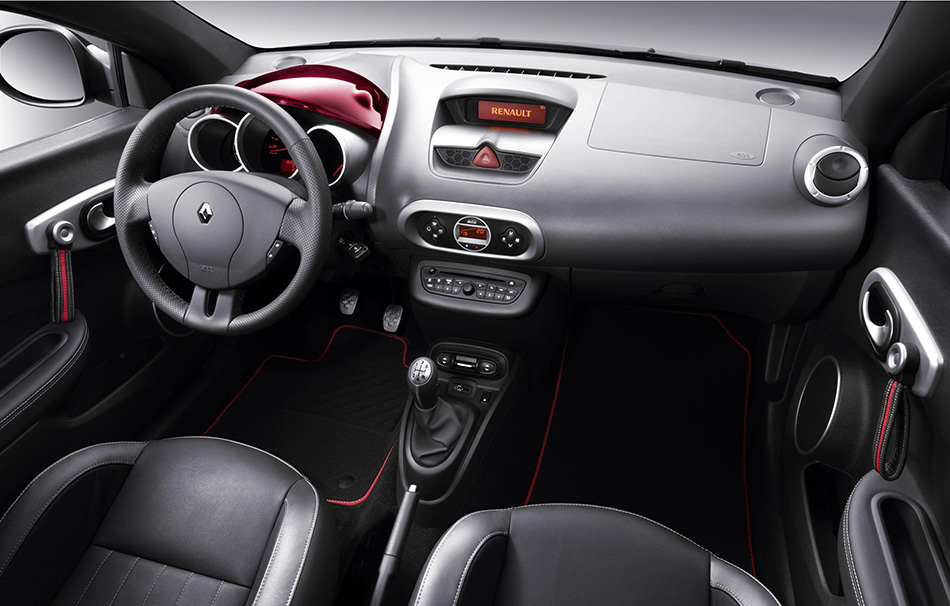 JUST 12 SECONDS TO LOWER THE TOP – A CLASS BEST!

After pulling on a handle to release the roof lock, the driver simply has to press on the electric switch for the roof to pivot round its axis between the quarter panels before silently coming to rest on top of the boot covered by an additional panel. An audible warning and a message on the trip computer inform the driver once the operation has been completed. In addition to being a quick way to lower or raise the top, this ingenious rotating system employs very few parts, which further contributes to its reliability.

The combined weight of the roof and its kinematics is a mere 21.8kg, which is a fifth of that of a conventional hard top. The interior of the roof is protected from dust and the elements in the 'open' position by a patented boot lid design, while the fixed rear window actively contributes to Wind's structural rigidity.

BOOT SPACE ON A PAR WITH CLIO

Whether the top is up or down, the same generous, easily accessible 270 dm3 VDA of boot space means that Renault Wind owners can travel with baggage, yet still enjoy al fresco motoring at will. Opening and shutting the boot requires no more effort than an ordinary saloon thanks to two gas struts.

The expertise of Renault Sport Technologies (R.S.T) when it comes to motoring enjoyment needs no introduction, and Renault Wind has benefited extensively from the knowledge of R.S.T's engineers. Staff at R.S.T's engineering headquarters in Les Ulis, near Paris, France, worked closely with teams from the nearby Technocentre in Guyancourt to ensure that Wind benefited fully from the company's very best skills. The new coupé-roadster capitalises on the strengths of the Clio 2 R.S. platform which is perfectly suited to the power outputs of the two engines available for Renault Wind, namely the TCe 100 and the 1.6 16V 133hp. The know-how of R.S.T's engineers enabled them to achieve the best weight/body rigidity ratio for a coupé-roadster, allowing Renault Wind owners to profit from an enjoyable ride combined with low fuel consumption and CO2 emissions.

Minimizing weight is the single most important factor when it comes to optimizing performance. It also contributes to reducing fuel consumption, yet a high level of body rigidity is necessary to ensure faultless roadholding. Consequently, the engineering teams paid careful attention to eliminate vibrations and achieve a high degree of body stiffness (9000Nm/degree).

To achieve this, they equipped the body with simple, innovative and effective additional bracing:

The sum of this work enables Wind to claim a best-in-class weight-tostructural rigidity ratio.

In addition to returning the fuel consumption of an engine of its size, this feisty powerplant boasts the power output of a 1.4 and the torque of a 1.6-litre powerplant. It is equipped with a low inertia turbo which ensures minimal lag thanks to the fitment of a small-diameter turbine and compressor. Maximum power is 100hp (74kW) at 5,500rpm, while peak torque is 152Nm (3,500rpm).

The combination of the TCe 100's small cubic capacity and low inertia turbo ensures responsive pick-up from low revs, with peak torque available at very low engine speeds and across a broad rev-band.The turbocharger includes a 'over-boost' feature which temporarily increases power output and torque (by 5hp and 6Nm respectively) in second, third and fourth gears at engine speeds of more than 4,500rpm. For added character, as well as extra punch and response, the TCE 100 engine drives through a short-ratio five-speed manual gearbox (JH3). The combination of the TCe 100 engine's smaller cubic capacity and the technology it employs maximizes driving pleasure, yet its combined cycle fuel consumption stands at only 6.3 litres/100km (equivalent to 145g of CO2/km).Renault Wind TCe 100 accelerates from standstill to 100kph in just 10.5 seconds.

Renault Wind is alternatively available with the Renault Sport Technologies-developed 1.6 16V normally-aspirated powerplant, the specially-tuned pitch of which serves as an immediate pointer to its fiery character.

With this engine under the bonnet, Renault Wind delivers plenty of punch and driving pleasure at low and transient engine speeds up to 4,500rpm, although it truly come into its own when pushed beyond the 4,500rpm mark. Renault Wind 1.6 16V accelerates from standstill to 100kph is just 9.2 seconds and boasts a top speed of 201kph, yet fuel consumption has been contained at 7 litres/100km (equivalent to CO2 emissions of 165g/km). 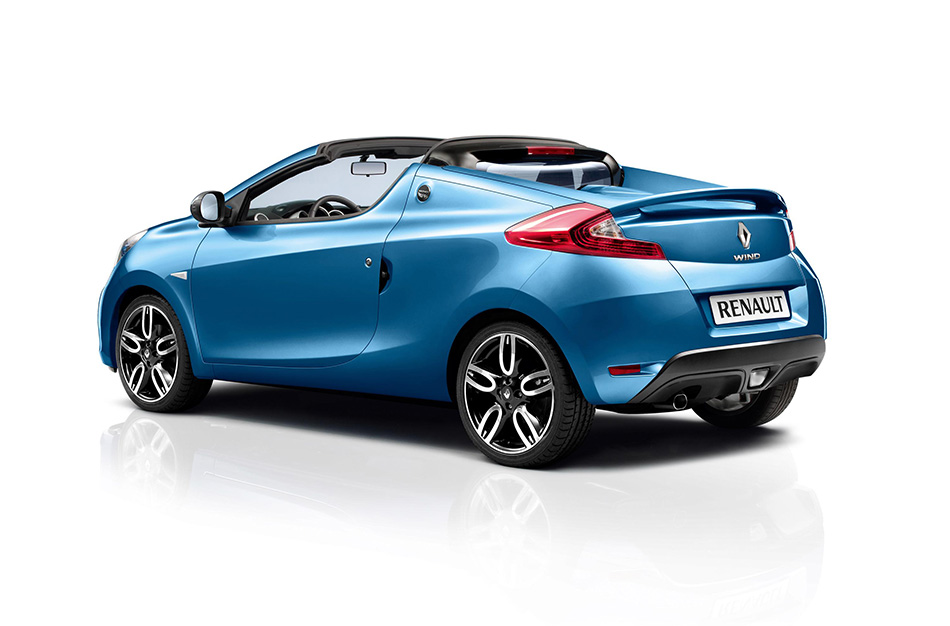 A long list of driver aids and equipment is available to assist the driver:

Renault Wind's reinforced body structure notably features steel bars and tubing for the underbody and boot. Patented, innovative door bracing protects the survival cell in the case of a head-on or side-on impact. The fixed rollover hoop incorporates the rear window and protects occupants in a rollover.

The deformable steering wheel, retractable steering column and extensive padding help prevent traumatic injuries in a major head-on impact. Safety performance is further enhanced by the third-generation Renault System for Restraint and Protection (SRP3) which takes into account impact force and the build of occupants thanks to the combined action of the following features :

Plug & Music connectivity permits occupants to plug digital devices such as iPod®, iPhone®, USB keys and other USB-compatible MP3 players into Renault Wind's own audio. This system enables occupants to enjoy music stored on a portable player and allows them to scroll through menus using the steering column-mounted or radio fascia controls. Directory, file and tune names are shown on the separate display.

The hands-free Bluetooth® telephony function enables drivers to make and take calls safely via Renault Wind's own loudspeakers. The system automatically recognizes the telephone each time the car is started. An exclusive Renault function enables the driver to select an automatic ‘hold' setting that puts callers on hold until he or she is in a situation where they can take an incoming call safely. The radio automatically mutes when an incoming or outgoing call is detected, while telephone functions can be controlled via the steering column-mounted fingertip controls, with messages shown on the separate display.