Renault is restating its passion for motor sports with the Renault Sport R.S. 01, a racing car of spectacular styling and exceptional performance. With a design inspired by the world of concept cars and governed by an absolute pursuit of aerodynamic downforce, Renault Sport

R.S. 01 is a radical expression of the brand's sporting DNA. Its technical specifications reflect the best of Renault Sport expertise. With a carbon monocoque chassis for a weight of less than 1,100 kg and an engine developing over 500 hp, it is able to reach a top speed of over 300 kph. From 2015, Renault Sport R.S. 01 will be one of the stars of World Series by Renault in a new championship, the Renault Sport Trophy, a springboard for the professional GT and Endurance championships.

Spectacular design, inspired by the world of concept cars!

Like all the Renault vehicles designed under the management of Laurens van den Acker, Renault Sport R.S. 01 displays a prominent logo, the key feature on the front end. The vehicle's impressive width of 2,000 mm – for a height of 1,116 mm – is reinforced by the signature of the LED daytime-running lights positioned along the brake cooling scoops. 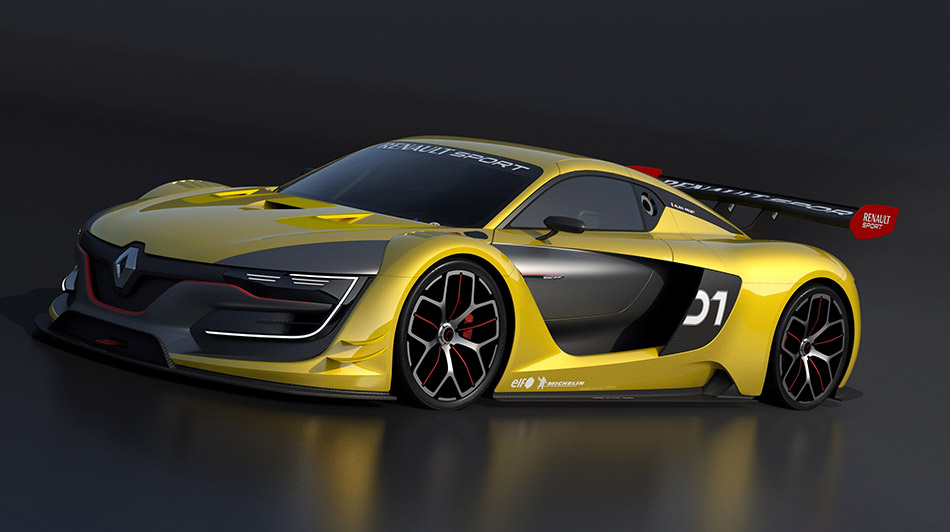 At the centre of the grille, the air is "sucked in" and channeled by the stem of the chassis towards the two water coolers. It is then expelled through the extractors positioned on the hood. The negative pressure thereby created increases downforce at the front of the car. The large blade of the lower splitter and the stepped flat bottom also contribute to aerodynamics at the front. The two fins on the side of the bumper generate vortices that limit the turbulence of the rotating wheels.

Underlined by the graphic pattern running from the headlights to the side air intakes, the low-slung profile is characteristic of a GT with a central rear engine. The imbalance in the overhangs is dictated by vehicle architecture and also by efforts to optimize weight distribution. The windows extending back to the airfoil and the curved shape of the rear bonnet further underline the choices made in design.

The air flow is channeled by the lower splitter into extractors positioned behind the front wheels. Running along the doors, these extractors change shape to become intercooler scoops. This provides effective cooling for the turbochargers.

Power and strong identity at the rear

As a result of the considerable efforts devoted to aerodynamics, Renault Sport R.S. 01 is able to achieve an exceptional level of performance beyond that of a GT3 and closer to that of a DTM. CI (lift coefficient) and CdA (drag coefficient) are similar to those of a Formula Renault 3.5. At the top speed of 300 kph, the downforce of 1.7 metric tons is equivalent to that of a Formula Renault 3.5, the benchmark single-seater in the World Series by Renault.

The aerodynamic performance of a single-seater

As a result of the considerable efforts devoted to aerodynamics, Renault Sport R.S. 01 is able to achieve an exceptional level of performance beyond that of a GT3 and closer to that of a DTM. CI (lift coefficient) and CdA (drag coefficient) are similar to those of a Formula Renault 3.5. At the top speed of 300 kph, the downforce of 1.7 metric tons is equivalent to that of a Formula Renault 3.5, the benchmark single-seater in the World Series by Renault.

A vehicle packed with the technical expertise of Renault Sport

The technical characteristics of Renault Sport R.S. 01 are on a par with its spectacular design. Providing effective protection for the driver, the carbon monocoque chassis enables a vehicle weight of just 1,100 kg. Installed in a central rear position, the Nismo V6 3.8L twin-turbo engine developing more than 500 hp is mated to a Sadev seven-speed sequential gearbox. With carbon brakes and special Michelin tires, Renault Sport R.S. 01 embodies the full technical expertise of Renault Sport Technologies.

Supervised by Motorsport technical manager for Renault Sport Technologies Christophe Chapelain, Renault Sport R.S. 01 was designed in cooperation with benchmark technical partners.
The carbon fiber monocoque chassis was a natural choice in order to meet objectives in terms of weight and safety. taly's Dallara was responsible for designing and building the chassis, in the same way as for Formula Renault 3.5. The tub, which includes the 150 liter fuel tank, features a steel roll cage at the top. At the front, a crash box absorbs energy in the event of frontal impact. Shaped like a boat's stem, the design contributes to aerodynamic efficiency. Another crash box attached to the gearbox, plays the same role at the rear of the car. The entire assembly respects FIA LMP1 2014 standards to ensure safety.

Completing the list of safety features are a collapsible steering column, and a Sabelt bucket seat with a six-point harness, compatible with the HANS® system.

The semi-stressed engine is bolted to the carbon monocoque chassis on the distribution side, and to the roll cage at the top. Prepared by Nismo, the 3.8L V6 twin-turbo engine is derived from the Nissan GT-R. The main change in relation to the production model is the dry sump system intended to prevent oil surges during long corners. The Pectel electronic unit features a traction control function.

Turbo pressure is set to deliver over 500 hp with maximum torque of more than 600 N.m. This positions Renault Sport R.S. 01 between a GT3 and a DTM in terms of performance.

The engine is mated to a longitudinal seven-speed gearbox supplied by Sadev. With an eye to budget management, the same gear ratio sets will be used for all tracks. However, it will be possible to adjust the preload setting of the self-locking differential.

Activated by steering-wheel paddles, the sequential control system is managed by an XAP electromagnetic actuator. Developed specially by ZF Race Engineering, the clutch features an anti-stall function and is designed for an extended service life. 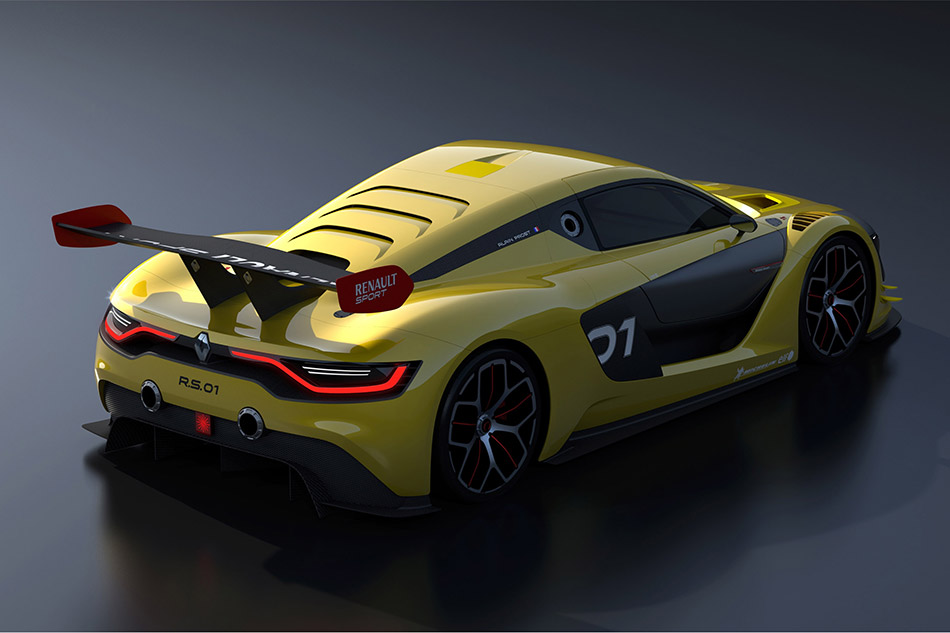 Grip is provided primarily by aerodynamic downforce and this is reflected in suspension design. In the same way as on sports prototypes, a conventional double wishbone layout has been adopted with pushrods and Öhlins dampers. Adjustable for compression and rebound, the systems are positioned on either side of the body at the front, and longitudinally above the gearbox at the rear.

The braking system combines 380 mm carbon discs from PFC Brakes with six-piston calipers. This choice is an excellent compromise between efficiency and endurance. Renault Sport R.S. 01 is also fitted with Bosch Motorsport ABS.

The partner of Renault Sport Technologies for all its motorsport products, Michelin has developed special 18-inch tires, mounted on wheels of original design with a central nut.

An organizer of motorsports events for 40 years, Renault Sport is entering a new phase with Renault Sport R.S. 01. The new car will add a fresh dimension to customer sport and to talent-spotting among pilots and amateur drivers. Renault Sport R.S. 01 will compete in the Renault Sport Trophy championship, an event built to measure. This one-design series, which will be part of the World Series by Renault from 2015, will be a new opportunity for "Pro-Am" teams*, and a gateway to the GT, DTM, ELMS and WEC championships.

Renault Sport Trophy, a new event for the 2015 season

"Renault Sport R.S. 01 marks the start of a new line. For this reason, it was named in tribute to Renault's very first Formula 1 vehicle. We wanted to design the best racing car in order to bring to light the best talent and prepare the next generation of drivers. Renault Sport R.S. 01 is a vehicle of exceptional performance and the World Series by Renault will be its showcase. We started from scratch in developing Renault Sport Trophy. It is an attractive event that stands out among existing motorsport events. With "Pro-Am" teams and a sports program combining sprinting and endurance, we will create a gateway to the higher series." Patrice Ratti, CEO of Renault Sport Technologies

After developing the most efficient programs for single-seaters, Renault Sport Technologies aims to roll out a new offering for hatches. Positioned between the Clio Cup events and professional championships, such as the WEC, DTM and Japanese Super GT, the Renault Sport Trophy is a gateway for the best pilots and for gentleman drivers.

The 2015 season will be open to twenty "Pro-Am" teams, classified according to the rules of the F A World Endurance Championship (WEC). At World Series by Renault meetings, competitors will be able to maximize their time on the track by taking part in a real monotype championship called Renault Sport Trophy.

Track time is currently estimated at more than four hours per car and per driver, over a three-day weekend.

The Renault Sport Trophy championship will reap the benefits of brand expertise in organizing motorsports events. Priority will be given to technical fairness, sporting ethics and cost control. The technical definition of Renault Sport R.S. 01 aims for servicing every other season, thus helping to keep running costs down.

A gateway to Japan and Le Mans!

Alongside the prize money for the best drivers and teams in each round, Renault Sport Technologies and its partners will be providing particularly attractive end-of-season rewards.

The champion in the "Pro" category will have the chance to follow a complete development program (simulator, physical preparation, media training, etc.) prior to taking a rookie test with the official Nismo team for the Super GT* in Japan. If he has the qualities required, he will be able to pursue his career in this extremely competitive discipline.

A similarly attractive reward will be provided for the "Am" champion, who will have the chance to take part in the 2016 Le Mans 24-Hour event driving an LMP2 prototype.