Due to be premiered by Renault at the 28th Sao Paulo Motor Show, the Duster Oroch show car is a styling exercise for a five-seat recreational pick-up truck featuring the robust looks of a true SUV. Pick-ups account for nearly 75% of the light commercial vehicle market in South America, representing just over 920,000 units. Renault has already announced plans to enter the pick-up market with at least two models.

The Duster Oroch is a creation of the Renault design centre for Latin America (RDAL) in Sao Paulo, one of Renault's five design centres worldwide. 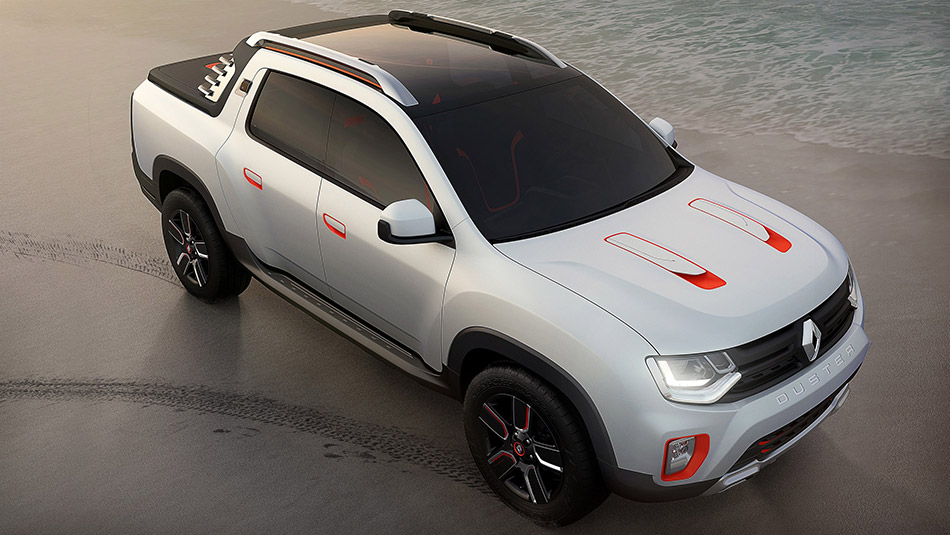 The show car's body colour is an exclusive combination of satin-finish white and touches of orange which highlight its sporty personality and the world of kitesurfing, which inspired the vehicle's design. The vehicle's front end features the new brand identity and carries over some of the styling cues explored previously on the D-Cross concept car, which was a reinterpretation of the Renault Duster presented at the Sao Paulo Motor Show in 2012. The large front and rear bumpers convey an impression of strength and power.

"The Renault Duster Oroch show car boasts the energetic, robust stance that appeals to customers. It's the work of our Sao Paulo design centre and packs an emotional punch which is characteristic of design in Latin America," comments Laurens van den Acker, Senior Vice President, Corporate Design for the Renault group. "While it takes its inspiration from the Duster, itself a robust vehicle with an assertive personality, our local design team has delivered a fresh interpretation of the model in the form of this show car."

The fully-integrated roof rails protect the panoramic glass sunroof which lets an abundance of natural light into the cabin and improves the sense of space inside the car. The rear layout has been specially designed to safely stow several kitesurf boards.

The Renault Duster Oroch includes two rear-mounted cameras to capture special sporting moments. Their angles are set at 80° and 140° for full outdoor coverage.

In true ‘go anywhere' style, the Renault Duster Oroch offers a spacious cabin, high ground clearance, 18-inch wheels (255x60 R18) and broad side protective mouldings. The dashboard features a multimedia screen which displays in real time the images captured by the two cameras installed in the rear of the dual cab outside the vehicle. A rotary control on the centre console is used to operate the cameras.

The Renault Duster Oroch's seats boast the new ‘Cover Carving' technology, which involves inserting an additional layer of foam in the seat to withstand intensive use. The technology also provides a better finish and permits a unique, customised design.

The Renault Duster Oroch's combination of colour and trim is reminiscent of the world of water sports. Fluorescent orange details brighten up the dark charcoal interior. The dashboard, door inserts and some parts of the seats are made from a material which looks like neoprene wetsuits.

"The Renault Duster Oroch is a concrete illustration of our strategy to develop products tailored to our Latin American markets," explains Denis Barbier, Senior Vice President, Chairman of the Americas Region. "Based on the Renault Duster, which is one of our best-selling models in the region, the show car explores the world of pick-ups – a segment we're absent from at the moment but which totals around 900,000 vehicles sold each year."

The Sao Paulo Motor Show will be held from October 30 to November 9 at the Anhembi exhibition centre in the city's north. It is the biggest motor show in South America, attracting just over 748,000 visitors in 2012.