Mazda Takeri made its world debut at 2011 Tokyo Motor Show. This concept car is the crystallization of the new 'KODO - Soul of Motion' design theme and breakthrough Skyactiv Technology, showing the future direction of Mazda's new-generation CD sedan. Mazda Takeri inherits the four-door sports coupe vision of the Mazda Shinari concept car, combining speed and excitement with sedan car styling. It is equipped with the new SKYACTIV-D clean diesel engine, Mazda's i-stop idling stop system, and a unique regenerative braking system 'i-ELOOP' developed in pursuit of ultimate energy efficiency. Together, these technologies achieve astonishing improvements in fuel efficiency and driving performance. Mazda Takeri's design, driving pleasure and environmental performance make it the ideal new-generation CD sedan that will be at the core of the Mazda vehicle lineup.

Evolving from the Mazda Shinari, Mazda Takeri exhibits styling that reflects the full nature of a Mazda CD sedan, with striking balance and a masculine power; the name Takeri is derived from a Japanese word meaning 'male'. 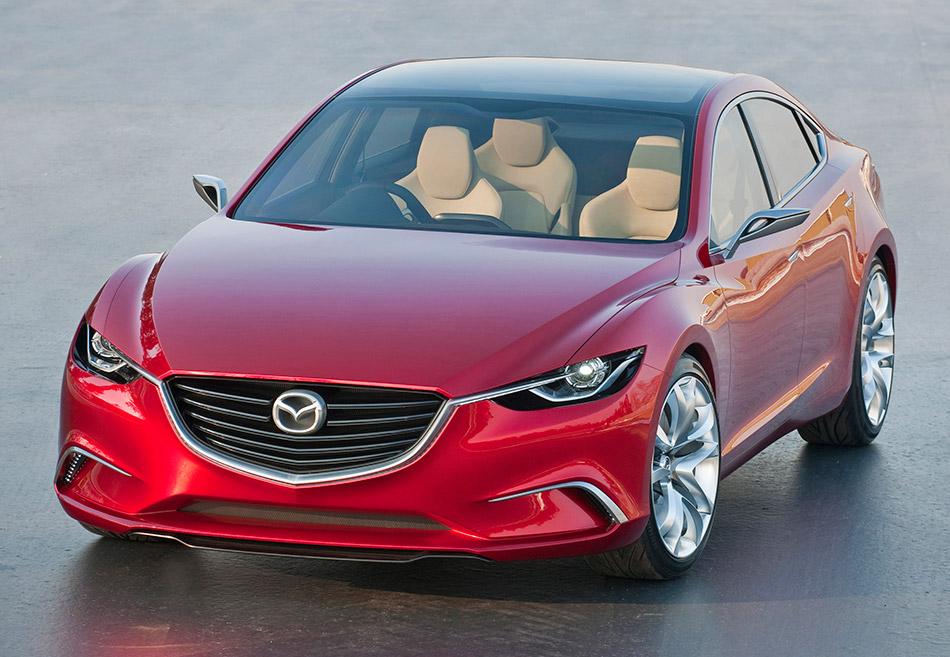 In developing Takeri, Mazda was seeking a breakthrough CD sedan design. The aim was to balance striking emotional appeal with unmistakably sedan-like styling, and to do it at a level never achieved before. The result is uniquely sporty sedan styling that embodies the quality and allure demanded in the CD category.

Mazda Takeri is fully equipped with the breakthrough Skyactiv Technology introduced on the Mazda CX-5. Its engine is the SKYACTIV-D new-generation highly efficient clean diesel, which, in combination with the six-speed SKYACTIV-DRIVE automatic transmission and i-stop idling stop system, delivers refined performance that overturns the traditional unexciting diesel image, along with superior fuel efficiency.

Through the combination of regenerative braking, the highly efficient SKYACTIV powertrain and architecture, and i-stop, Mazda Takeri delivers astonishingly high levels of both driving pleasure and outstanding environmental performance.

Mazda Takeri is the embodiment of Mazda's next-generation CD sedan vision, showing the flair of KODO design while simultaneously achieving the ultimate efficiency for a vehicle without hybrid technologies.

Building on the styling of the previous concept model, the Mazda Shinari, Mazda focused on making Takeri's exterior design even more arresting by visually capturing a sense of coiled animal power stored and ready to explode into rapid motion, and fitting it around the layout and packaging of a CD segment car. The powerful overhanging front fender line, sculpted over the wheels, evokes the image of a cheetah's shoulder as it uses its front paws to grip the ground and quickly change direction. The rear fender line is the powerful inflection of the hip as the cheetah kicks off to run. Building from these images and melding the rhythms of the differing front and rear shapes, the designers were able to clearly express a lean, muscular body and the sense of running free. In addition, the powerful axis that runs the full length of the vehicle evokes an image of the car's spine, visually embodying a confident, masculine power as well as a sense of speed.

The deeply chiseled front view has the 'signature wings' that tell you immediately this is a new-generation Mazda. The entire front end has the solidity and confidence appropriate for a CD sedan. Headlamps are set deep into the wings in sculpted mountings, suggesting a glint in the eye and a desire to run free.

While containing a comfortable space for four adults, the cabin is positioned further back to express dynamic proportions giving a superb balance between the stylistic beauty of a sedan, an emotionally appealing elegance, and an unparalleled expression of power that lets you intuitively feel the joy of driving.

Similar to the front, the rear is deeply chiseled to express a strong sense of determination. The lines from the side and the shape of the trunk create a fine balance between a sense of speed and a sense of stability.

Taking the thinking behind Mazda Shinari as a starting point, Takeri's interior is a high-level balance of the sense of speed and the functionality of the driver-car interface. Of course, materials used and the overall comfort and ambience of the cabin are appropriate for Mazda's top-of-the-range CD sedan. 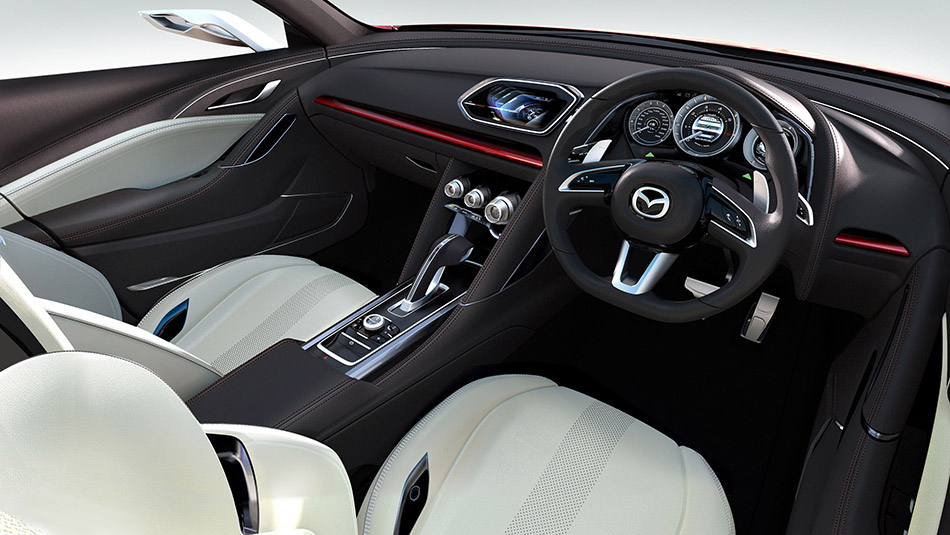 The flowing lines from the upper section of the instrument panel to the door trim evoke a sense of speed and pulse-raising dynamism that is KODO design at its finest. The lower section of the instrument panel forms a strong horizontal line and the thick trim which looks like a part of the frame, runs horizontally from the passenger side to the center panel. The result is a sense of stability suited to a sedan, differing markedly from the Shinari four-door sports coupe's interior.

Further, the instrument panel garnish has a metal base with a clear coating that creates a fresh sense of newness. When struck by light, the base naturally has a metallic sheen, displaying a sense of depth and quality befitting a CD sedan.

Mazda Takeri's new SKYACTIV-D clean diesel engine achieves compression-induced spontaneous ignition at the world's lowest compression ratio. The major result is an ideal combustion cycle with highly efficient energy conversion. It also results in lower mechanical stress, reducing friction and allowing dramatic reductions in the weight of each engine component. Thanks to these benefits, SKYACTIV-D delivers exhilarating acceleration in combination with exceptional fuel economy to upend conventional views of the diesel engine, and its cruising range is expected to be 1,500km. Takeri is also equipped with an i-stop system specifically developed for use with a diesel engine that achieves the world's first re-ignition with a single compression. This eliminates the load on the battery and starter motor during restarts and cuts fuel wastage to achieve superior environmental performance. This clearly sets i-stop apart from conventional diesel engine idling stop systems, giving smooth, fast restarts and relaxed, stress-free driving. In addition, Takeri features Mazda's unique regenerative braking system i-ELOOP to greatly improve driving performance and fuel economy.