The 2004 VUE Red Line, the first in Saturn's new series of performance-tuned vehicles, represents the next step in Saturn's drive to generate new interest in the brand. Scheduled for public debut at the New York Auto Show, the limited-production sport utility features a lowered body, sport-tuned suspension and steering, a monochromatic exterior including ground effects, and aggressive 18-inch wheels and tires. The VUE Red Line also has upgrades that will be featured across the 2004 VUE lineup, including a newly available 3.5-liter, 250-horsepower V-6 engine and a number of exterior and interior refinements.

The VUE Red Line will be available in both front-wheel drive and all-wheel drive. It is scheduled for production around the first of next year at Saturn's manufacturing facility in Spring Hill, Tenn.

"The VUE Red Line is designed for drivers who enjoy sporty ride and handling, but don't want to sacrifice the VUE's exceptional versatility," said Jill Lajdziak, Saturn's vice president for sales, service and marketing. "This specialty vehicle breaks new ground in the small SUV market and is positioned at the intersection of three important industry trends: surging small SUV sales, strong truck personalization and sport tuning. At the same time, the VUE Red Line calls attention to the many enhancements that we are making on the entire 2004 VUE lineup." 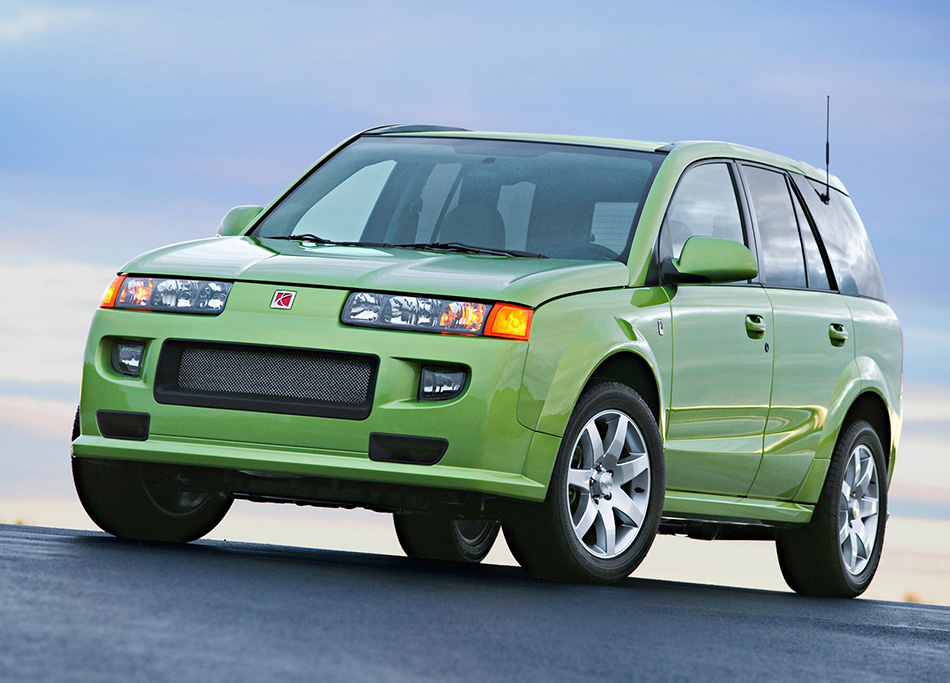 "Red Line" is the name that will be used on all future Saturn performance-tuned vehicles, including a special edition of the ION quad coupe that will come to market in early 2004. Red Line vehicles will carry a specific exterior emblem denoting its status within the Saturn family.

"Like the ION quad coupe, the VUE was designed for personalization, and Saturn was excited to work with the Performance Division on the Red Line series," said Doug Parks, VUE chief engineer. "In the VUE, we took an already significantly enhanced 2004 model and kicked it up a notch."

Its custom looks include new rockers, rear fascia, front fascia with black air intakes, and chrome exhaust tip. Door and liftgate handles, along with mirror housings, are painted body color to finish off the monochromatic theme. The VUE Red Line will be available in Onyx Black, Silver Nickel or Electric Lime.

In the standard VUE, the new powertrain also increases towing ability to 3,500 pounds and permits the vehicle to be flat-towed, compared to the 2,500-pound capacity of the 3.0L V-6 engine it replaces. VUEs equipped with the new V-6 will meet the California ULEV-II emissions standard (ultra-low emissions vehicle).

The new V-6, which is mated to a five-speed automatic transmission, is just one of the enhancements Saturn is making to its VUE lineup for 2004. VUE customers can also continue to choose an Ecotec inline four-cylinder engine, available with either a five-speed manual or the advanced VTi variable transmission.

Like the powertrain, the VUE Red Line benefits from enhancements being made to the interior of all 2004 VUE models, including new acoustical treatments to reduce noise inside the cabin, available six-way power driver seat, two new CD radios with MP3 readability, a leather-wrapped three-spoke steering wheel and shift knob (V-6 models), a back-lit instrument cluster with white gauge faces and chrome rings, and automatic headlamp control (standard on V-6, optional on I-4). 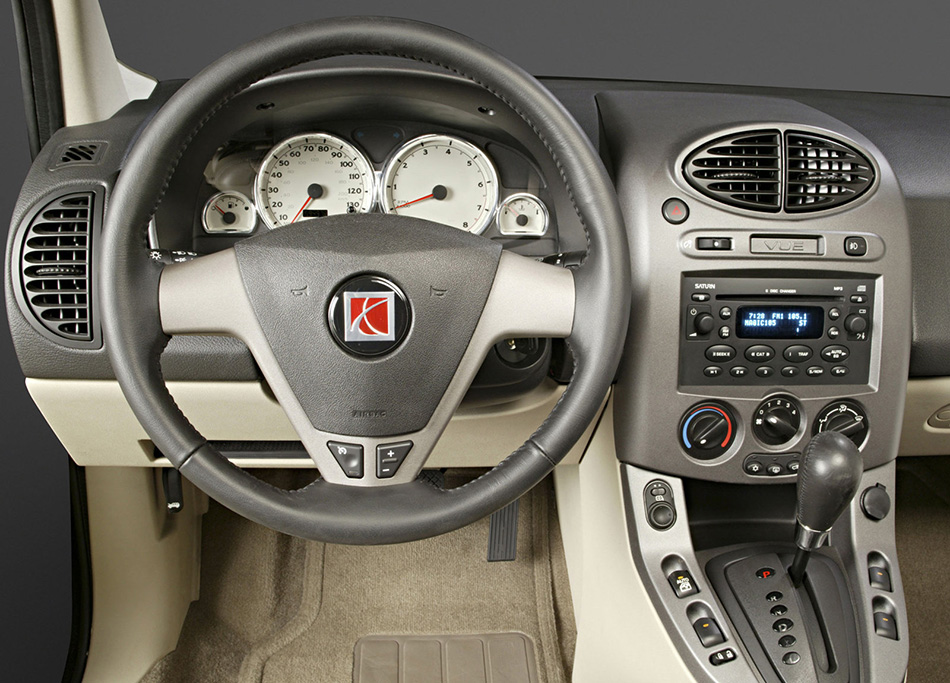 Exterior changes for 2004 include dark-tinted rear door glass and new 17-inch machined aluminum wheels that are standard on all-wheel-drive V-6 models, optional on the front-wheel-drive V-6. Body-color door handles and chrome "SATURN" lettering in the liftgate eyebrow will be standard on non-Red Line V-6 models.