Developed by Calty Design Research, Toyota's North American design studio located in Newport Beach, Calif. and Scion's Advanced Product Strategy Team, and built by Five Axis of Huntington Beach, Calif., the all-new FUSE was designed to be the new Scion sports coupe icon. Its goal was to push the limits of a coupe concept by combining entertainment, digital technology, and versatility into one sinister looking package. Most importantly, its styling makes a visual statement about its intention to expand the performance envelope among affordable, entry-level sport coupes.

"The idea of the all-new FUSE Sports Coupe is a reflection of the boundless limits and creative envelope that embodies all the vital personalization components of a Scion product," said Mark Templin, Scion vice president. "Since the launch of Scion three years ago, designers have learned a great deal about what inspires and motivates Scion buyers through its unique vehicle lineup and instilled them into the FUSE." 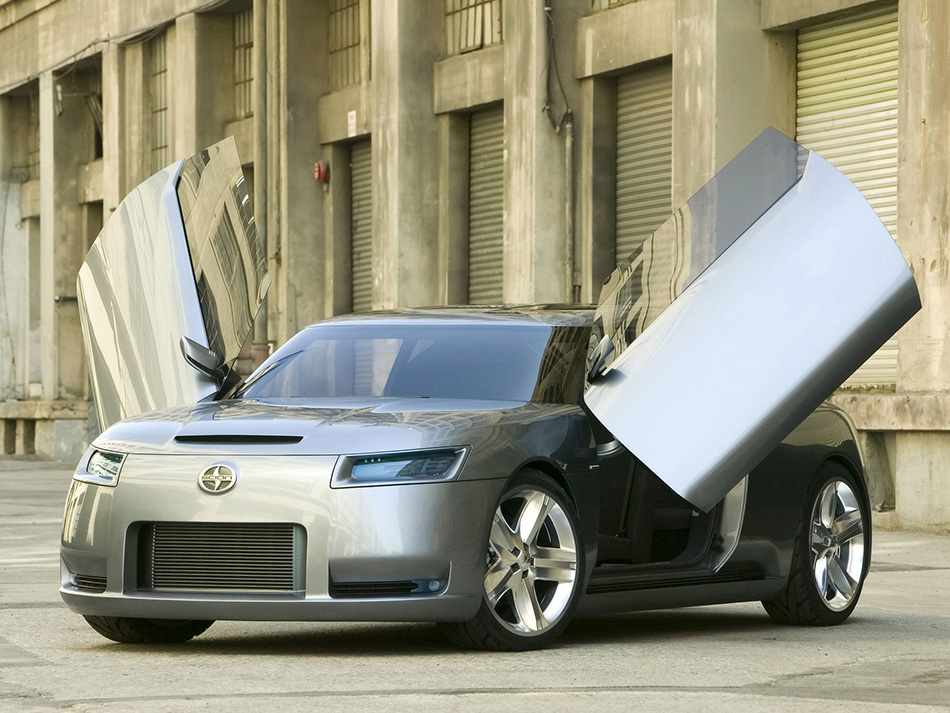 The exterior of the FUSE was the conception of Calty designers Alex Shen and Bob Mochizuki, who were determined to create a strong performance statement. Inspiration came from the "HAKO" super GT racing cars of Japan, commonly known as the JGTC series. From the side, the FUSE has a low, aggressive stance with a race helmet-inspired wraparound window that provides a panoramic view. The visor-like wraparound windshield is balanced by a strong C-pillar, adding a sense of security and protection. At first glance, the menacing presence and dark undertones of the FUSE subtly hint there is more than meets the eye. The front of the FUSE glares at you with slim, high-mounted, deep-set headlamps communicating a serious and aggressive attitude. A massive rectangular air intake hints at potential for a large intercooler.

From the back, wide-body rear flares span the entire rear mass, encasing deep-set vertical taillamps. The dual exhaust also serves as fog and reverse lamps as lighting encircles each exhaust tip. Wheels are 20-inch custom-machined with LED's on the end of each spoke, which illuminate as turn indicators. On top, two horizontal glass panels run the length of the roof, and slide open in both directions offering all occupants access to a personal sunroof. The rear window tapers down to a speed-activated spoiler. True to the Scion tradition, the FUSE is equipped with extreme levels of personalization accessories. Headlights and fog lamps can be programmed to illuminate in various colors. Videos or images can be downloaded and viewed on a concealed LCD screen behind the front badge. And then there is the interior.

Calty interior designers Alan Schneider and Ichirou Mukai used the long wheelbase and high beltline of the FUSE to help create the interior theme, which revolves around providing the driver with an intense driving environment and occupants an intimate atmosphere. The activation of a small key-shaped sensor unhinges butterfly doors that open to reveal an interior that merges technology, function and racing inspired elements in an asymmetrical pentagon where the driver is positioned at the apex of the surround. The influence of the "racing tub" in the overall design is obvious. It provides a unique contrast that highlights the floating technical elements of the interior. A drive-by-wire steering interface combines influences from race cars and video game controllers in one innovative driver module. A media station that runs the length of the dash is the focal point of the cabin. Passengers can watch movies, play video games, or do both, with dual display 10.5-inch monitors. The FUSE interior concept is referred to as "one plus stuff." The design focuses on the driver by offering surprising versatility in the form of three interior arrangements: video, driving and cargo configurations. In its video mode, the front passenger seat folds flat and serves as a table, or footrest. Occupants can utilize video screens or take advantage of wireless fidelity (Wi-Fi) connectivity and instant message their friends. In driving mode, the video screens turn off and a multi-informational display is used for driver information.

Utility is maximized in a cargo mode where the front passenger seat and rear seats fold down to form a flat surface. And, multi-functioning rear cargo access allows stowage of larger items. The FUSE cabin seats four comfortably, however when the car is parked, additional room is available with a tailgate that converts to provide outdoor seating. A sweep of the foot over an infrared sensor located on the lip of the rear bumper opens the rear tailgate and sliding hatch, allowing the tailgate to drop down into a curb-high bench. This surprising seating arrangement is paired with rear foldout speakers for an unexpected social environment. Enhancing the social scene is a detachable drink cooler with a retractable handle, which is integrated into the rear center console. Additional features include subtle accent lighting on the seats, doors and overhead lining. Deeply contoured seats are upholstered with soft-to-the-touch "Mythos" fabric that wraps around passengers for maximum comfort. Finally, audio, video and HVAC systems are easily controlled by a "vehicle system/communication interface" touch control board that is similar in appearance to a telephone keypad.

"The FUSE is a styling exercise that presents a discussion starting point for Scion owners and other Gen Y consumers with an eye towards a versatile sports coupe," said Templin. "Like previous Scion concepts, the FUSE delivers a unique statement about what the Scion brand is all about and where it is headed."