"The t2B combines the attitude of the xB with the comfort and sophistication of the tC to further reflect the dynamic nature of our buyers, and their desire to be distinctive," said Jim Farley, Scion vice president. "The t2B designers were given the direction to create a concept which would represent the love of owning your first car, and the mindset that your car is more than just a mode of transportation, it's a lifestyle."

The Scion t2B was developed by Calty Design Studio in Newport Beach, Calif., and built by Five Axis of Huntington Beach. The exterior concept is the creation of Alex Shen, project lead designer and Jin Kim, senior designer from Calty. 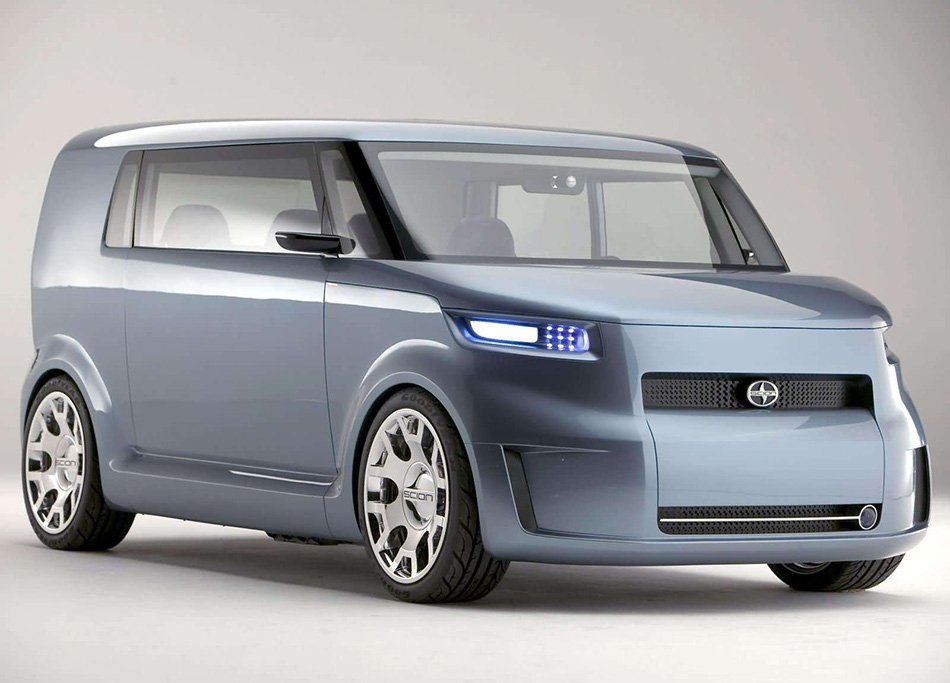 Riding on an all-new platform, the t2B is powered by a 2.4-liter four-cylinder engine and four-speed automatic transmission. It is equipped with 14-inch brakes with slotted rotors and 20-inch custom-machined, polished billet aluminum wheels.

A unique asymmetric exterior shape is created through the use of a "demado" design theme, which is Japanese for "bay window." Just as bay windows provide a sense of added space, Calty designers took this idea and applied it to the t2B's overall body style, resulting in its reverse trapezoidal shape. The addition of a wedge roof gives the concept a sporty and aggressive silhouette. A flush-fit wraparound windshield nearly conjoins with its oversized door windows to create a feeling of open spaciousness.

Styling elements from the front are carried over to the rear with vertical, bezel-framed red tail lights and an exhaust tip and reverse light that are housed in the lower bumper. The reverse trapezoidal shape is further emphasized with a "wide screen" rear window. The power rear hatch is remote operated, allowing easy cargo access.

Door handles and b-pillars are absent on the t2B. This omission, teamed with a high beltline and contoured edges convey sophistication and allows an uninterrupted view of the vehicles profile. The passenger side features a large, single remote-controlled power sliding door, allowing easy front- and back-seat entry from a single door. The driver side incorporates two remote-controlled suicide doors, which unlatch via remote control and manually swing open a full 180-degrees, revealing a surprisingly large lounge-like interior.

The interior design, developed by Calty senior designer Bill Chergosky and Naoki Hamajima, takes advantage of the t2B's pure styling exercise by using a theme of "anything is possible." This theme is immediately evident upon entering the t2B. Its exterior demado shape makes the roof the widest point of the interior, allowing occupants to enjoy a sense of open space and headroom. Openness is further experienced with two fixed-glass moonroof panels, which run nearly the entire length of the roof. 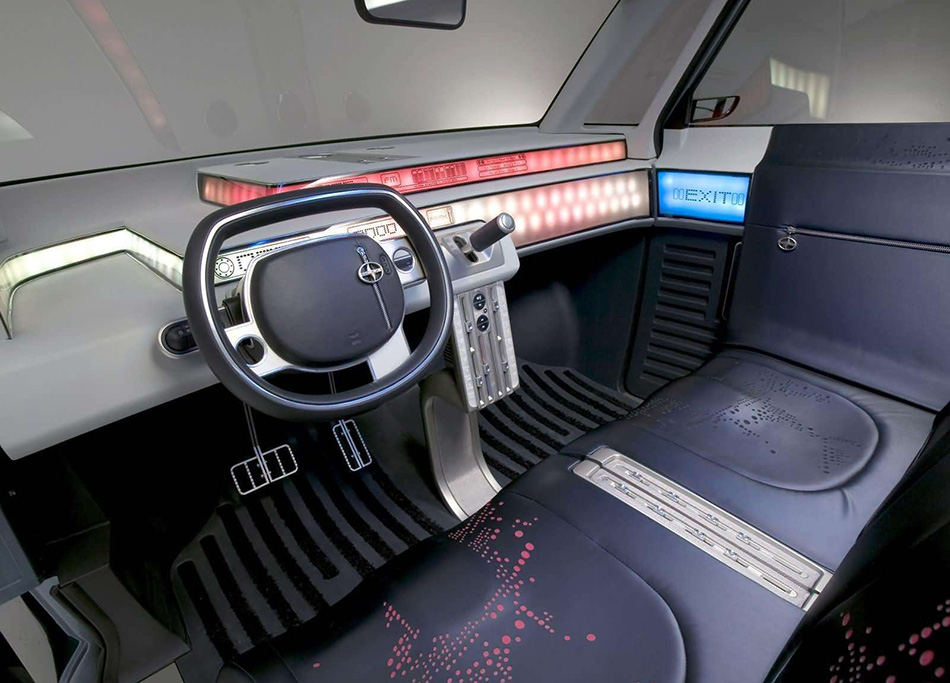 Different components of the interior come together to create an enclosed environment for occupants. Rear seats are slightly higher than the front, giving a stadium-like feel. Each of the four seats is contoured to the human body. When the doors are closed, sloping, padded lining integrates with the seats, providing lounge-like comfort. Seating material is multi-layered starting with brushed blue-steel perforated leather. A unique perforated design pattern exposes an underlying layer of color-keyed material on the three passenger seats and a distinctive red underlay on the driver seat. The seats are integrated with the floor where underlying carpet is exposed through long floorboard slots made of cast rubber with a seat-matching brushed metal finish.

An asymmetrical tri-level instrument panel features a large information ticker, which provides the user access to movies, games and music via downloads from the Internet, similar to today's cell phones. The upper layer of the instrument panel (IP) features an mp3 docking station, which echoes the dual moonroof design. The asymmetrical look of the IP is extended to the layout of the three-spoke steering wheel. The HVAC system is vertically integrated into a long and sleek center stack, extending from the IP to the floor.

Customization is further maximized in the rear where the t2B's wide rear glass serves as a projection screen for movies, games or screen savers. To accommodate large social gatherings, the screen can be seen inside and out. A docking port and secondary controls are located in the rear cargo area for gaming systems.

Integrated into the suicide doors are speakers, which can be directed away from the interior. This, along with the rear projection screen, turns the t2B into an entertainment center when parked.

Unique, soft storage compartments are located in the sloping seat-integrated door pads, steering wheel, and under the rear seats. Contents are secured and removed through the use of Scion-themed zippers.

Calty also created two small-scale variations of the t2B concept to further illustrate Scion's forward thinking. The two scale models, the sport-themed Fastback and the utility-themed Cargo, reflect the many design possibilities of the t2B concept. Both the Cargo and Fastback are on display at the Scion exhibit at the 2005 New York Auto Show.

"The t2B pushes the envelope to successfully convey the three elements incorporated into all Scion products, style, versatility, and surprise," said Farley. "Like previous Scion concepts, the t2B provides our design teams the opportunity to make an impression with creative styling elements and allows us to listen to consumer feedback."