In addition, all 2013 xB models that begin production in August or after will also come standard with the new audio system. "A standard touchscreen audio system across the entire Scion lineup stays true to the brand's innovative nature and responsiveness to the desires of its youthful drivers," Scion Vice President Doug Murtha said. Available BeSpoke® Premium Audio System Beyond the base audio system, all new models will offer the Scion BeSpoke Premium Audio system featuring Aha™. This upgraded system features GPS navigation services, integration with popular social media applications and smartphone-compatible access to 30,000 free audio stations, including sports, news, entertainment and Scion's own signature station featuring a lineup of its 17 music channels. 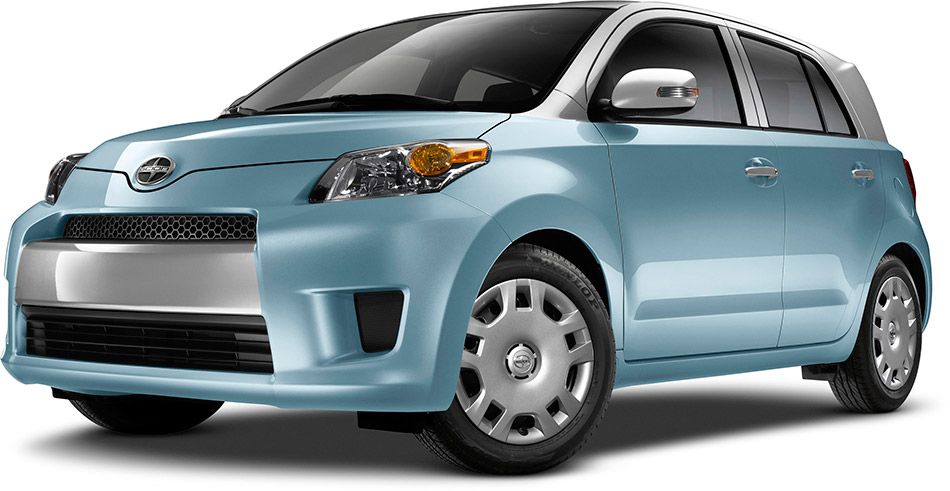 Vehicles will be available in dealerships in September. The MSRP for the Scion xD will be $16,720 for the automatic transmission model and $15,920 for the manual transmission. The two-tone paint options on the 2014 Scion xD are available for $500 above MSRP. 2014 Scion FR-S Features Added Comfort Scion FR-S knee cushion The Scion FR-S rear-wheel drive sports car has attracted a following for its sporty handling and aggressive design. New for 2014, the FR-S will offer added comfort for both the driver and front passenger from new sport knee cushions that are located on the door panels and the sides of the center console.

The iQ Monogram Series focuses on taking the iQ to the next level by adding premium features at a great value. The limited-production iQ will feature the stylish two-tone paint combination of Black Currant Metallic/Classic Silver Metallic, color-keyed exterior mirrors and spoiler, along with a premium alloy wheel package and floor mats emblazoned with the iQ logo. Only 150 iQ Monogram Series models will be made. They will have a MSRP of $16,520 and arrive in dealerships in October. 2013 xB Now Features Standard Display Audio System 2013 xB models that begin production in August or after will come standard with the new Scion Display Audio System. In addition to its iconic shape, the xB offers lots of utility with its generous passenger and cargo space. Available now, the MSRP for the Scion xB is $17,920 for the automatic transmission model and $16,970 for the manual transmission. Scion MSRPs do not include a $755 delivery, processing and handling (DPH) for all Scion models.

The DPH fee for vehicles distributed by Southeast Toyota (SET) and Gulf States Toyota (GST) may vary. The complimentary Scion Service Boost includes normal factory-recommended maintenance services up to two years or 25,000 miles, whichever comes first, and 24-hour roadside assistance for up to two years from the date of purchase.