The most successful and best-known SEAT model, the Ibiza, has undergone a profound transformation, both in terms of its exterior styling and its interior design. While it is not a new generation, it is possible to speak of a new Ibiza since the restyling of its body emphasises its sporty and dynamic characteristics even further. At the same time, its appearance is now more consistent with the rest of the new SEAT range, as it features elements from the Altea, Toledo and León.

The new SEAT Ibiza also features major improvements in terms of the look of its interior, which now utilises higher-quality materials. One example is the new trim for the dashboard and the door panels, which now features a new finish and colours. The same also holds true for the upholstery, which is even more up to date and attractive in appearance.

Right from its launch, the new Ibiza range will comprise five trim levels: Reference, Stylance, Sport, FR and Cupra. The aesthetic transformation of the model has the same effect on the first three trim levels, while the FR and Cupra feature specific modifications to accentuate their sportier character. 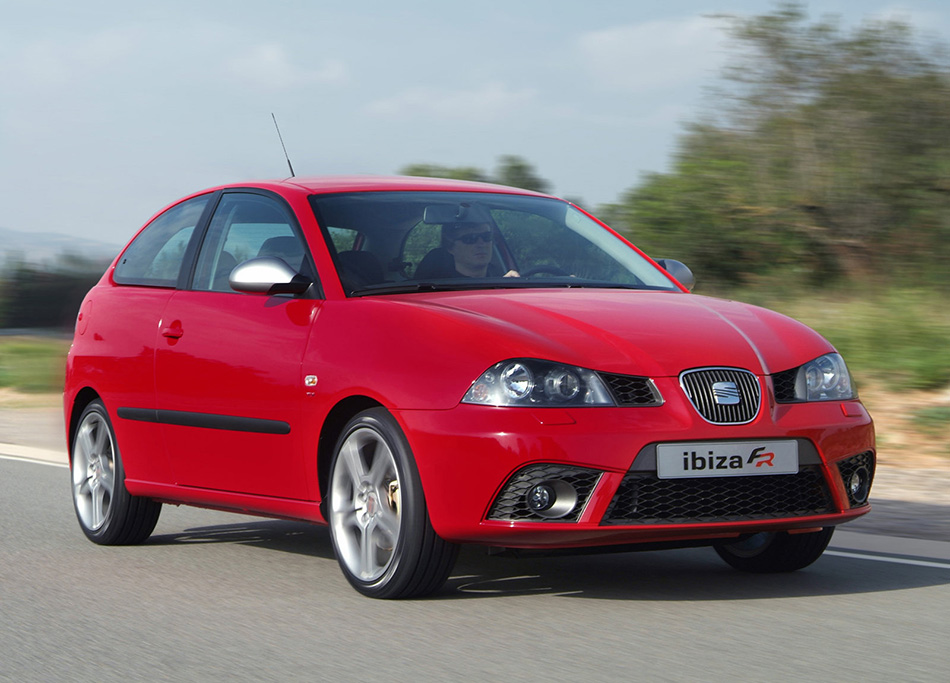 The new front bumper, which is more wrap-around in form and features a honeycomb grille, is common to all trim levels of the new Ibiza, except for the Cupra. Also new are the visible tailpipes – for versions featuring engines of 100 horsepower or greater – as well as the twin headlights. Various light clusters, dark-red in colour, are visible at the rear, while the "Ibiza" badge is now positioned at the centre of the tailgate, as seen on the latest generation of SEAT models. The wheels are now 15 inches in diameter with 195/55 tyres, while Sport versions have 16" wheels. The FR and Cupra models come with 17" wheels with different designs for each version.

On the inside, further to the modifications to the dashboard and door panels, the redesigned steering wheel and gear stick are particularly striking and the central console and air vents are now finished in silver.

The new SEAT Ibiza FR has been given a more distinctive appearance, both on the outside and on the inside. Thus, the body displays a front bumper specific to this model, with a honeycomb grille featuring enlarged air intakes, while the registration plate area is highlighted in black. The rear bumper is also an exclusive feature, and while the name "Ibiza" is now situated on the centre of the tailgate as for the other trim levels, the letters "FR" are positioned on the right-hand side. Other particularly distinctive features are the 17" wheels with a specific design, and double chrome tailpipes.

The inside of the FR boasts a sportier appearance thanks to the seats, which offer excellent lateral support, and the steering wheel, gear stick and upholstery, which are all exclusive to this model. In this way the Ibiza FR creates its very own style, with the letters "FR" appearing on the lower part of the leather steering wheel in metallic look, on the gearknob along with the gearshift pattern – also with a metallic finish – and in the centre of the upper part of the front seat backs.

The new SEAT Ibiza range will comprise a total of 18 versions from launch, the result of combining the five available trim levels with a choice of 11 engines.

The engine range for the new Ibiza line will be one of the most complete and wide-ranging on the market, and has not undergone any variation with respect to the current line-up.

It features power units that are well-known and of proven efficiency. The petrol range starts with the 1.2 12V developing 64 hp, and also includes the 1.4 16V generating 75 hp – with manual or automatic gearbox – the 1.4 16V with 100 hp and the 1.8 20V turbo, with two versions developing 150 and 180 hp, which are exclusive to the Ibiza FR and the Ibiza Cupra respectively. All of these engines come with five-speed manual gearboxes (apart from the automatic gearbox).

For diesel buyers there are five options, all with direct-injection TDI technology – two 1.4 litre and three 1.9 litre engines. The 1.4 with 70 hp is the entry-level engine. The other 1.4 version offers an extra 10 hp. The third engine in the range is the 1.9 litre developing 100 hp, while the top end of the range features the 1.9 with 130 hp (for the Ibiza FR) and the Cupra's 1.9 160 hp, the most powerful diesel in the Ibiza's segment. These last two power units come with six-speed manual gearboxes, and the other three engines with five-speed manual gearboxes. All five engines fulfil the Euro IV emissions standard.

The general structure of the car has not been modified in the new SEAT Ibiza. The chassis is the same as for the current model, incorporating the "Agile Chassis" developed at the Technical Centre in Martorell. There are four different versions: the standard chassis featured in the Reference and Stylance, a chassis specific to the Sport, a further version for the FR, and last but not least, the Cupra, which also comes with its own specific version.

Fundamentally, the suspension is the same for all Ibiza models, with independent front suspension and semi-independent rear suspension with a torsion beam. The spring and shock-absorber settings, the diameter of the anti-roll bars and the elastocinematik characteristics of the silent-blocks of the anchorage to the suspension are what distinguishes the lines from each other, as all four versions have different settings.

The steering rack with electro-hydraulic assistance is common to all trim levels, although there are three different settings – one for the Reference and Stylance, another for the Sport and FR, and a third for the Cupra.

The brake system, which features ABS as standard, consists of brake discs at the front and rear for all versions with engines generating more than 80 hp. Versions featuring engines with more than 100 hp come with TCS traction control as standard, while the Cupra includes ESP (Electronic Stability Programme). ESP and TCS are also available as options for all engine versions.