The SEAT Ibiza Vaillante is a comic-book hero fantasy come true. It was created by the SEAT Design Centre in Martorell, whose aim was to suggest the driver of a fictional car could be transported to a make-believe world and participate in the most unexpected adventures. For this reason, SEAT does not plan to manufacture a production model Vaillante, or to sell one in the future. Quite simply, it is a virtual car inspired by comic-strip fantasy for this motor show only, whose mission is to highlight SEAT's sporty and young image, while also enhancing the launch of the new Ibiza 2006 range.

The objective of its presentation at the SEAT stand at the Geneva Motor Show is to attract visitors, not to see a fantastically unreal show-car, but to a vehicle that has been developed from the new Ibiza – one that could well be the first compact car driven by the famous comic-book driver Michel Vaillant. 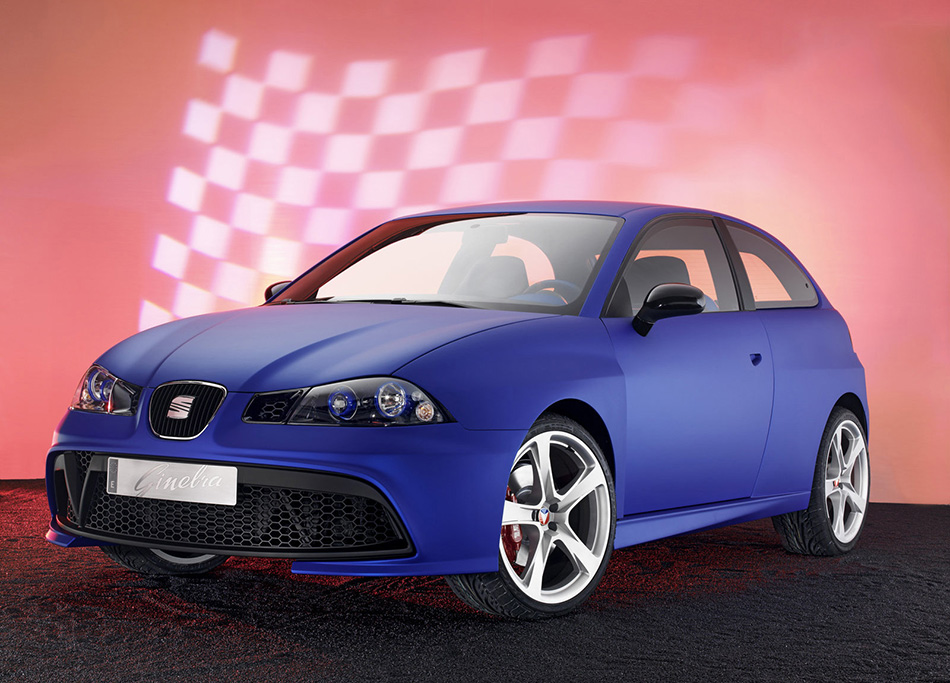 It is a truly fictional car. With the Vaillante, SEAT Design director Luc Donckerwolke and his team wanted to transform the Ibiza into a comic-strip inspired fantasy, an exaggerated version that suggests the Ibiza is a young car with a rightful place in a popular cartoon strip. And since comics are such a powerful communication tool among young people, this new image of the Ibiza is materialised and exhibited to the public as an Ibiza for drivers who crave adventure.

The Vaillante is a combination of two concepts: the image of SEAT – fiery spirit, sporty, young and proud to be the only Spanish car manufacturer – and the image of Michel Vaillant, the engaging comic-book hero whose success has been captivating motor sport fans for more than half a century.

The Ibiza Vaillante is a true show-car that serves to reinforce the brand's image; there are no plans for its commercial launch. The SEAT Design department based its design on a unique SEAT Sport prototype – a special Ibiza with a different front and rear end, 40 mm wider, and shod with 235/35 R 19 tyres on 19 inch diameter and 8.5 inch wide alloy wheels.

A 240 hp Ibiza for Vaillant only

This basis for the Ibiza Vaillante would not be complete without a powerful engine. Equipped with a 1.8 litre four cylinder turbocharged petrol engine based on that used in the former León Cupra, this new version develops 15 hp more, for a total of 240.

This makes the Vaillante the most radical Ibiza-inspired car. Injected with extra vitamins to enhance its sporty side, the Ibiza Vaillante emphasises the direction taken by the Ibiza since its initial launch in 1984, and gives a glimpse of what will no doubt be its even sportier future, shaped by the new 2006 range.

With its sporty, aggressive silhouette, the Ibiza Vaillante's bold design statement is its claim to comic-strip hero's car status. The pearly metallic blue of its body is reminiscent of the former French blue racing colour, which is widely used on the cars in Michel Vaillant's adventures.

Although its overall looks hint at the Ibiza, the Vaillante is completely different from the waist-line down. It has a longer, more radical front end, featuring redesigned headlights and a large grille spanning the length of the revamped bumper. The latticed grille is emblazoned with a huge letter V (for Vaillante) that goes from top to bottom on the right-hand side, clearly identifying it as a comic-book car.

The pumped-up muscle-car look of the SEAT Ibiza Vaillante is emphasised by the chunky front and rear wheel arches and the defined shoulders at waist-line height. The front arches feature vertical air slats, and the car's 40 mm lower ground clearance and large wheels are key to its brawny, sporty looks. On each alloy wheel, the five spokes are laced together with triangles, adding to their dramatic style.

A side view of the Ibiza Vaillante reveals that its rear-view mirrors emerge directly from the door panels, as on the León, instead of from the window frames. The tailgate features the word ‘Vaillante' in the centre, as on the Ibiza 2006 and the Ibiza Cupra. The newly designed bumper has a solid black surface at the bottom that hints at an air inlet, and a centrally mounted triangular exhaust pipe also mimics the V for Vaillante.

Eye-catching rear light clusters form a semi-wraparound horizontal line that extends inwards towards the centre of the hatch. The tailgate itself has been revamped, and features clean, simple lines on a nearly vertical design.

In record time, Luc Donckerwolke and his team at the SEAT Design Centre focussed considerable effort on creating an interior to match the philosophy of a comic-book hero's fictional car. Donckerwolke admits that since it is not meant to be a competition car, he did not want to equip it a safety cage. Instead, he designed a highly rigid horizontal structure that takes up the entire rear of the car and extends laterally towards the central console. 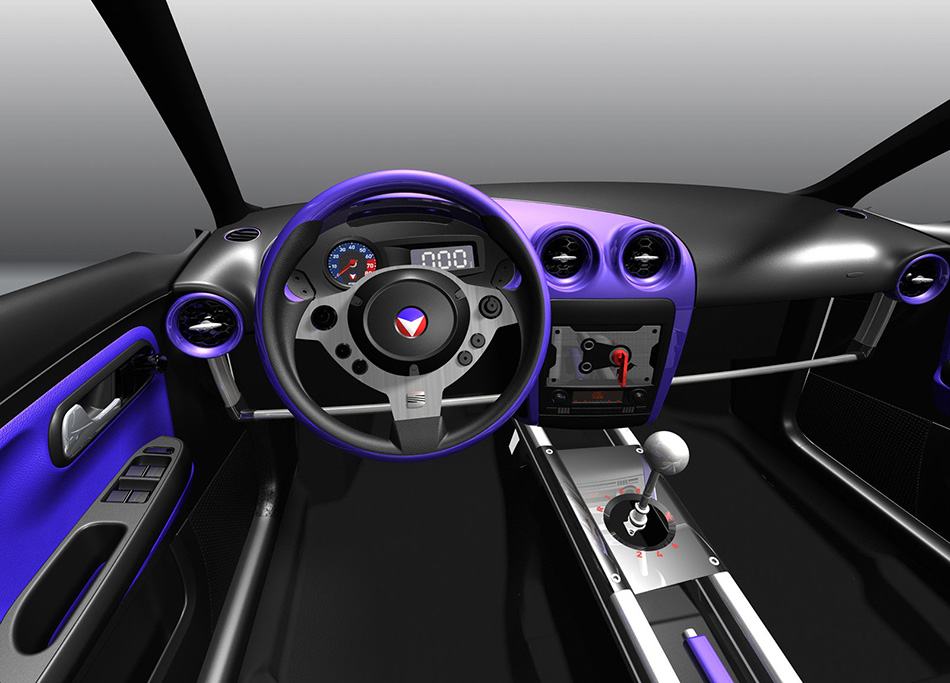 A visible spare tyre is encased in the centre of this structure, while the transverse bar running behind the original sport seats houses the helmets and anchorage points for the safety harnesses. The two bars that converge at the central console form a platform for the gear lever, which is perched higher, as on a competition car.

The interior is packed with touches of blue, principally on all the elements that make up the safety structure, which lends even more of a comic-book atmosphere. The open-face driving helmets, lodged behind the front seats, match the blue of the car and the interior trim. They mimic the one worn by Michel Vaillant and are personalised with the letter V for Vaillante.

Some people get their calling in the most unusual way. The case of SEAT Design director Luc Donckerwolke is an example of how to reach a goal that was established during childhood. Born in Belgium 40 years ago, Donckerwolke has replaced Walter de' Silva as SEAT Design Director after leaving Lamborghini, where in eight years he created such exceptional cars as the Murciélago, the Murciélago Roadster and the Gallardo.

When he decided to create a Geneva show-car to reinforce the launch of the Ibiza 2006, he knew from the start that an association with Vaillant would be an excellent idea.

For those acquainted with Michel Vaillant, the name Vaillante is applied to this fictional character's cars. But how did Luc Donckerwolke become such a fan of Vaillant? The Belgians are widely known as great comic-strip fans, especially of the adventures of Tintin, so it is not unusual that Donckerwolke would become fascinated with comic-book heroes as a child. But this is not the only reason…

His own answer to the same question is nonetheless surprising. "As a boy, I fell ill with fever in Burundi, where I used to live with my family. To make my convalescence easier, my father gave me a Michel Vaillant comic-book. It had such an impact on me that I immediately started to draw cars".

Was that when you first became interested in design? "Yes, actually, although not so much in design itself as in drawing more and more cars. I was obsessed with drawing cars, and that led me in my youth to seek out Jean Graton, the creator of my childhood comic-book hero Michel Vaillant".

Did that search have much to do with your current profession? "Of course it did. I found Graton and offered to draw cars for Michel Vaillant, and I still do so nowadays as a hobby. It was a stepping stone towards designing real cars", he added.

SEAT's Design director justifies his fondness for Michel Vaillant in that "several leading names in the motor racing industry are familiar with Vaillant, a fictional character who has been with them and triggered their growing interest for cars".

A big Lamborghini fan – he has even participated in historical car races at the wheel of a Miura – Luc Donckerwolke began his tenure as SEAT Design director only a few months ago. The next question is obvious: why base his show-car on the Ibiza? Donckerwolke gives several convincing answers. The first is that "the Ibiza is the main reason for the success of SEAT; in fact the name itself is almost more familiar than the SEAT name". Secondly, "because the Vaillante means that the Ibiza is still a cornerstone for SEAT". And thirdly, "because the Vaillante suggests a positive image, youth, fair play, a winning attitude, etc. – qualities that are inherent to the Ibiza".

Coming back to the comic-book setting, is there any special reason for transforming the Ibiza into the Vaillante? "Of course there is" says Luc Donckerwolke. "It would no doubt be the car chosen by Michel Vaillant if he were to drive a SEAT model in an upcoming adventure". 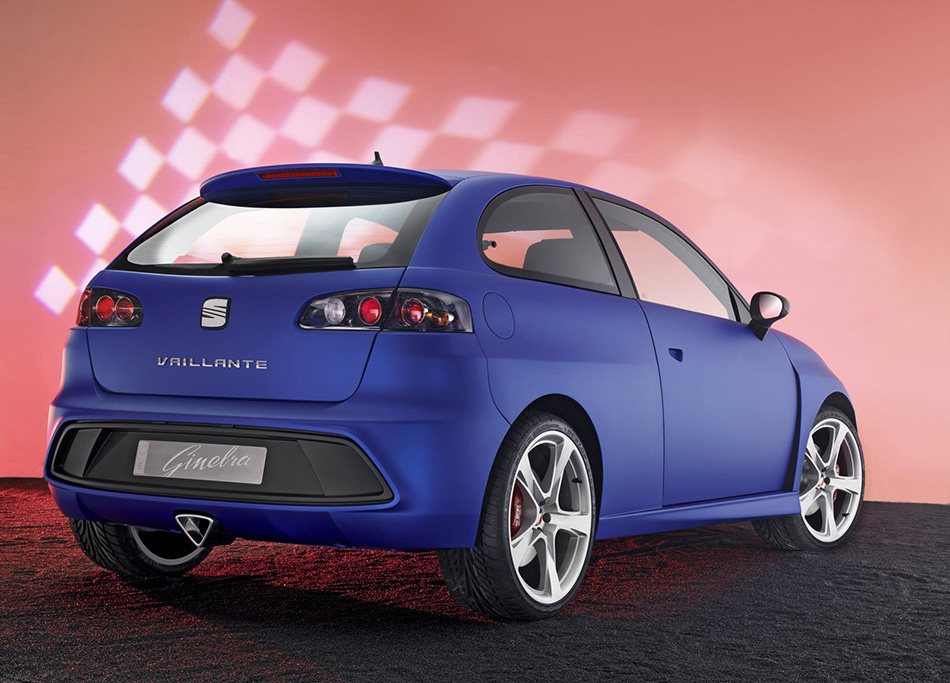 Belgian-born Luc Donckerwolke, 40, was appointed SEAT Design Director on 15th September 2005. He stems from Lamborghini, where he started in 1998 and became Head of Design in 2003. During his time at the famous Italian sports car manufacturer, he created such exceptional models as the Murciélago, the Gallardo and the Murciélago Roadster.

Donckerwolke studied industrial engineering at the ECAM University of Brussels and automobile design at the Swiss "Arts Centre College of Design Europe". Among other outstanding awards in his possession, he received the 2005 Monterey (USA) Concorso Italiano Hall of Fame award for his contribution to automotive design excellence.

Created on 7 February 1957 by French cartoonist Jean Graton, Michel Vaillant is a comic-book character who stars as a race-car driver in an action-packed family saga. 50 years later, his adventures continue in increasingly exciting, realistic cartoons in which the cars rival each other in looks and performance.

Two generations of motor racing enthusiasts have passed down their passion for Michel Vaillant to their children, and are about to do the same with their grandchildren. His adventures have had such a decisive influence on several professional racing drivers that some even admit their passion began with Michel Vaillant books.