After 40 years, racing legend Carroll Shelby and the Ford Mustang are back together with the introduction of the 2007 Ford Shelby GT500.

The collaboration between Shelby and Ford's Special Vehicle Team (SVT) is yielding an instant collector's Mustang that builds 475 horsepower in its 5.4-liter supercharged V-8.

A modern interpretation of the Shelby Mustang of the 1960s, the Ford Shelby GT500 uses advanced engineering to attain the performance that made the original GT500 the king of the road. 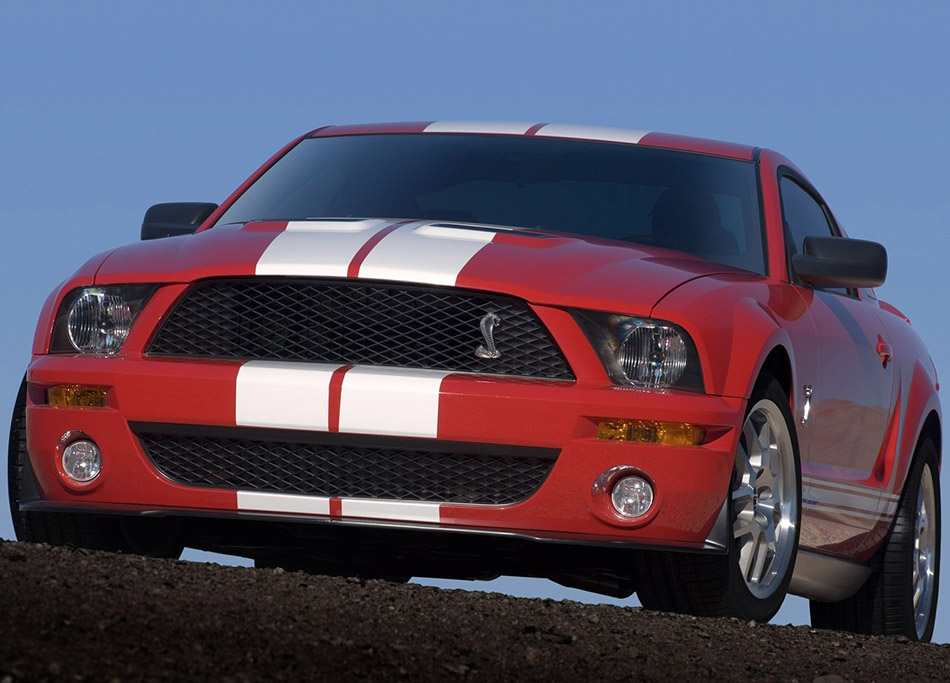 True to the original GT500, it will be available both as a coupe and as a convertible when it goes on sale in the summer of 2006.

Serving as touchstone and inspirational leader for both the concept and the production versions, Shelby was impressed by what the team has accomplished.

The rear spoiler of the Ford Shelby GT500 echoes that of the classic GT500, while the rear air diffuser is inspired by the modern Ford GT.

"It's one thing to put 450 horsepower in an exotic supercar," says Shelby. "It's another to put that much power in something as affordable as a Mustang. The fact that they not only met their goal but pushed on to 475 horsepower is a remarkable achievement."

Shelby knows something about creating modern supercars. He served as a senior adviser on the team that developed and built the 550-horsepower Ford GT.

As expected of anything with Shelby's name on it, the heart of the car is what's under the hood. The Ford Shelby GT500's supercharged 5.4-liter, 32-valve V-8 evolves from Ford's experience with tuning its modular, or MOD, engines. Output is a brawny 475 horsepower.

The engine is force-fed an air-and-fuel mixture via a "Roots-type" supercharger providing 8.5 pounds per square inch of boost. The GT500 uses a cast-iron engine block. It borrows from the Ford GT program aluminum, four-valve cylinder heads, piston rings and bearings, adding a high level of performance durability to the drivetrain. "Powered by SVT" camshaft covers add the finishing touch to the engine.

Helping put the power to the pavement is a 6-speed manual gearbox. For the performance driver, its evenly spaced gears mean less "stirring" is needed to find the "sweet spot." This gives a rewarding experience throughout the engine's broad torque curve. The heavy-duty transmission has proven itself a willing companion to Mustangs in both road and track environments, including recent road-going Mustang Cobras and the new race-winning Mustang FR500C. The Ford Shelby GT500 continues a legacy of all-around performance that made the original a world-class racer on tracks and road courses around the world.

The Ford Shelby GT500 starts with the solid Mustang underpinnings. The all-new Mustang was designed from the beginning with performance derivatives in mind, providing an exceptionally rigid, well-engineered starting point for GT500 chassis engineers.

This rear suspension design has been validated on the track by Ford Racing. The Ford Racing Mustang FR500C was purpose-built from the base 2005 Mustang body structure and suspension geometry to run in the Grand-Am Cup series, a class of road racing for production-based cars.

Competing against the best from Germany and Japan, a Mustang FR500C won its first race in the season opener at Daytona International Speedway in February 2005. It went on to dominate the season and clinch the championship.

"SVT and Ford Racing will be working closer than ever as we go forward on future projects, especially Mustangs," says Thai-Tang, a Ford Racing alumnus who served as the race engineer for the Newman-Haas Racing team in 1993.

To match this power and handling ability, engineers fitted some of the biggest brakes in the business to the Ford Shelby GT500. Four-piston Brembo calipers are fitted to 14-inch Brembo vented rotors up front, and 11.8-inch vented discs in the rear continue SVT's legacy of great-braking Mustangs. Secure footing is provided by 255/45ZR high-performance tires in front and 285/40ZR high-performance tires in back. Wheels are 18 inches by 9.5 inches.