After 40 years, racing legend Carroll Shelby and the Ford Mustang are back together with the introduction of the 2007 Ford Mustang Shelby GT500.

The collaboration between Shelby and Ford's Special Vehicle Team (SVT) is yielding an instant collector's Mustang that builds 500 horsepower in its 5.4-liter supercharged V-8.

A modern interpretation of the Shelby Mustang of the 1960s, the Ford Shelby GT500 uses advanced engineering to attain the performance that made the original GT500 the king of the road. 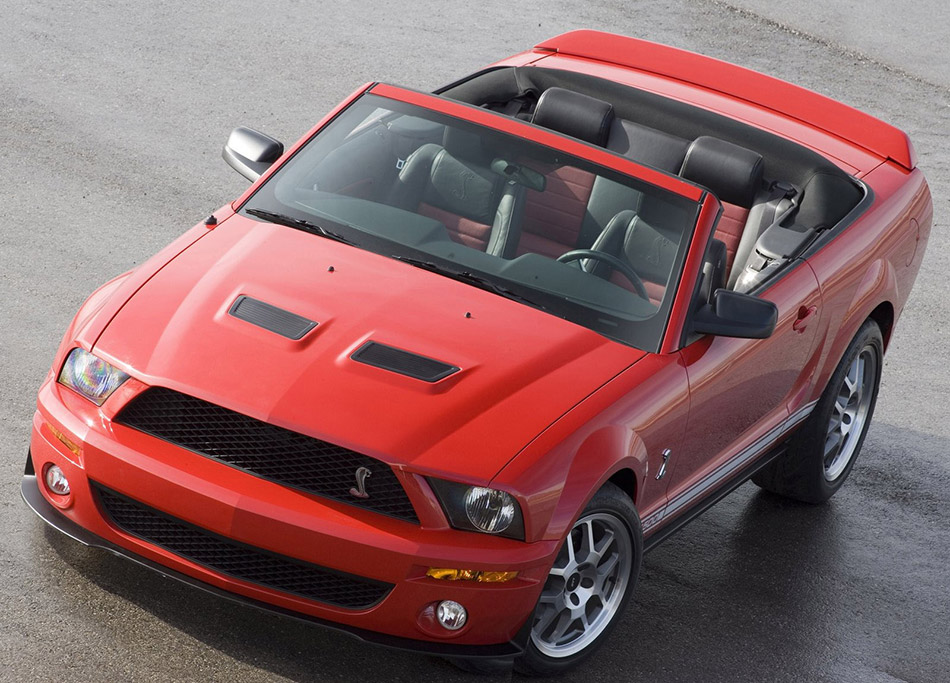 True to the original GT500, it will be available both as a coupe and as a convertible when it goes on sale in the summer of 2006.

Serving as touchstone and inspirational leader for both the concept and the production versions, Shelby was impressed by what the team has accomplished.

"It's one thing to put 450 horsepower in an exotic supercar," says Shelby. "It's another to put that much power in something as affordable as a Mustang. The fact that they not only met their goal but pushed on to 500 horsepower is a remarkable achievement."

Shelby knows something about creating modern supercars. He served as a senior adviser on the team that developed and built the 550-horsepower Ford GT.

The 2007 Ford Mustang Shelby GT500 is a purposeful performance car and striking to look at.

The design team did not merely take heritage cues and paste them onto the contemporary Mustang. Working with the engineering team, they dedicated themselves to a design that would enhance the car's performance.

For example, the fog lamps were removed from the upper grille opening where they are located on the Mustang GT. Smaller units were relocated on the outside of the lower front fascia where they function well.

"We found that the original Shelby Mustang's design came about in response to maximizing the car's performance," says Doug Gaffka, chief designer for Mustang, SVT and Vehicle Personalization. "The same is true of the SVT design language that has evolved over time."

A further example of how form follows function is the design of the heat extractors on the hood of the Shelby GT500. Here, they can better remove heat from the engine compartment - an important consideration for a car generating 500 horsepower.

"It is perfect, says Carroll Shelby of the car's overall design. "I wouldn't change a thing. It is everything I expected a modern Shelby Mustang to be."

Other functional aero additions to the Shelby GT500 can be found at the front and rear. The rear spoiler adds significant downforce. Similarly, the front air splitter effectively combats lift.

The 18 x 9.5-inch wheels worn by the Shelby GT500 also bear a resemblance to those of the Ford GT.

The Shelby GT500 convertible shares cues with other high-end Ford Motor Company products. Rather than using vinyl for its top, as the mainstream Mustang does, the GT500 convertible uses the same type of cloth as that on the Ford Thunderbird and the Jaguar XK. The top is available only in black to match the car's predominantly black interior.

"There is definitely an upscale feel to the top," says Keith Rogman, SVT design manager. "It fits in the same category as the stripes: They don't make the car go faster, they don't make it split the wind better, but they add a certain intangible authenticity to the car that you can't quantify."

Indeed, stripes don't make the car go faster, but they play a big role in the car's identity. In coupe form, the car wears the full regalia of stripes Carroll Shelby bestowed upon the original GT500 coupe: a Le Mans stripe that runs over the hood, roof and rear deck and side stripes bearing the legend "GT500" nomenclature. 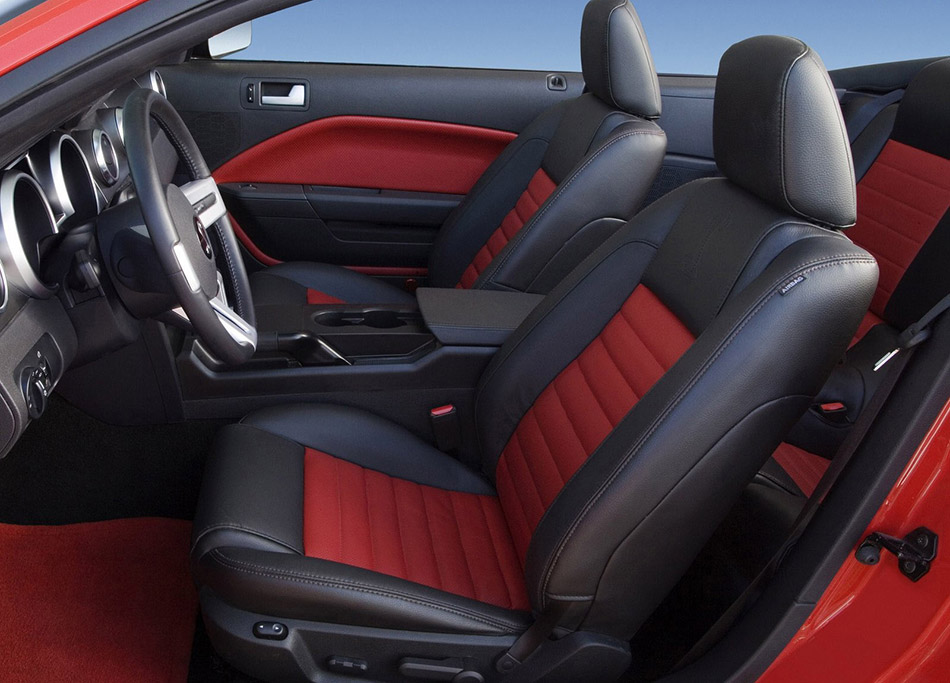 "Except for the Grabber Orange and Tungsten combination, these combinations echo what we did with the original car," says Shelby.

Peter Horbury, executive director, Design, North America, had the opportunity to learn firsthand just how much that color combination does catch the eye. "I sneaked out on the Woodward Dream Cruise in a yellow prototype of the GT500," he said. "Everybody knew what it was. People were stepping out in the road to take pictures."

Carroll Shelby, it seems, is not the only one who feels expectations have been met.

The 2007 Ford Shelby GT500 boasts an upgraded version of the mainstream Mustang's interior, designed to cater to the dedicated driving enthusiast.

Most apparent is the use of light-faced gauges, a tradition on SVT's cars and trucks and one that can improve readability under a variety of lighting conditions. The gauges also boast SVT graphics.

"This is something the SVT engineering staff insisted on - particularly because the GT500 is available only with a manual transmission," says Keith Rogman, SVT design manager. "Making the switch allows the driver the best view of the tach while changing gears."

Adds Doug Gaffka, chief designer for Mustang, SVT and Vehicle Personalization: "This is very much in keeping with the SVT hallmark of substance. It gives the customer a direct benefit and not just a bit of decoration."

Sit Down and Drive

Substance and function also are the reason the front seats in the Shelby GT500 are different from other Mustangs. Bolstering has been added to provide increased lateral support. This helps keep the driver optimally placed.

Seating surfaces are leather, and the classic figure of a cobra is embossed on the front seat backs. The steering wheel rim is wrapped in leather and has unique thumb pads. The shift boot is also made of leather and the parking brake handle is leather clad.

And the Ford Special Vehicle Team has put its stamp on things as it welcomes enthusiasts into the car via bright door sill trim plates bearing SVT script.