Robbie Williams is the first official owner of one of the 2,000 smart crossblade. At the official handover on 18 April 2002 in Hamburg, the international entertainer will get the car with the number 0008, as specially requested by him. "Wow, I just love this car. It's innovative and unconventional, the two main qualities I look for in new projects", says Robbie Williams on his new smart crossblade.

The association between the Micro Compact Car smart GmbH and the British entertainer started in December 2001 – with the premiere of the film Nobody Someday. "Robbie Williams seems to embody our target group's joyous attitude to life and the image of our brand. We are very happy to have him as our first smart crossblade customer," says Andreas Renschler, President of MCC smart. 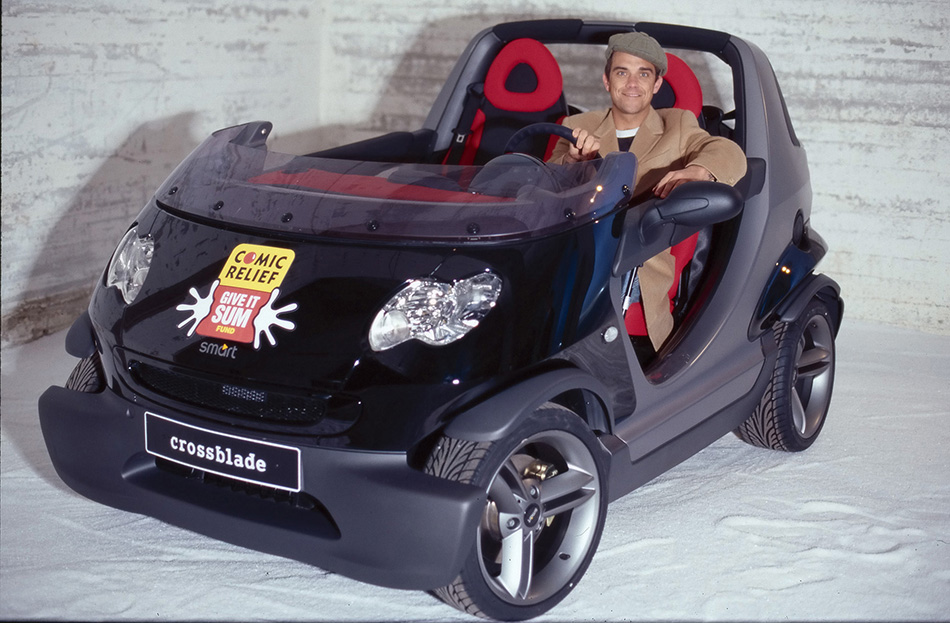 MCC smart is auctioning off the smart crossblade 0001 - information on www.smart.com and www.robbie-williams.com. Proceeds will go to the Robbie Williams charity "Give It Sum!". Everyone except the highest bidder will have to wait until June 2002, when there will be a maximum of 2,000 smart crossblade available from smart dealers, worldwide.

"Give It Sum!" is Robbie Williams' charity for tackling poverty and promoting social justice. As Robbie says, "I'm starting in Stoke-on-Trent, my home town. It's not an area you'd immediately think of, but it's become pretty depressed lately with high unemployment and worsening poverty. I'd like to give people both young and old (and those in between) a chance to do something for themselves."

"Give It Sum!" aims to give disadvantaged people a chance to improve local conditions and strengthen community life. Priority is given to groups that are run by local people rather than professional organisations. The Charity has targeted work in North Staffordshire as this is Robbie's home town area, but, in the future, it is likely that other areas will benefit - both in the UK and elsewhere in the world.