The smart forfun, a smart forfour with monster truck ambitions, caused quite a stir at the Athens Motor Show in November 2005. Following the extremely positive response to this, the decision to develop a further vehicle with a similar character was a logical step.

Following the initiative of Mercedes-Benz Hellas, Stefan Attart (46), Greek Champion in 4x4 Rally Races had clear ideas: the new off-road vehicle should have the body of a smart fortwo. A suitable platform now had to be found.

DaimlerChrysler has always had an unusually large range of off-road vehicles - from the M-Class to the G-model and the Unimog. One look at the smart forfun2 (pronounced smart forfun to the second) and you see straightaway that it is based on a Mercedes-Benz Unimog 406 series.

This is what makes it so fascinating: the combination of two vehicles, each of which has achieved cult status in its respective segment. So it's no wonder that the smart forfun2 awakens the inner child in everyone who sees it. 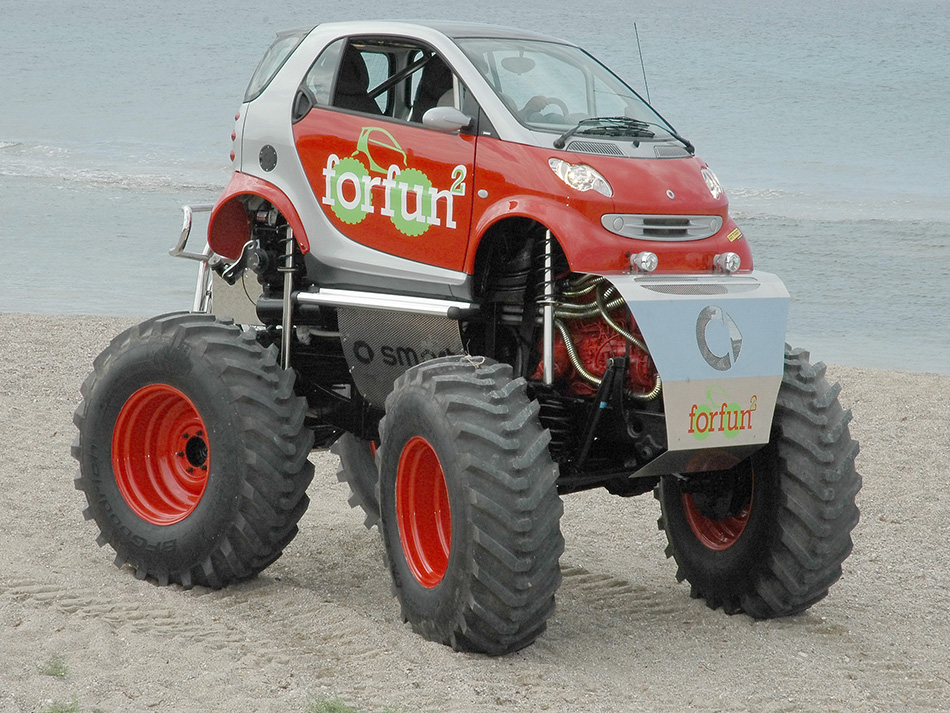 But first things first: once the platform for the smart forfun2 had been decided, in January of this year Stefan Attart started working on the first designs. It goes without saying that there's more to an off-road vehicle like this than simply screwing four wheels under a smart fortwo.

Based on technical drawings of both vehicles, a design was created that for the first time clearly showed the direction the new vehicle was to take. Stefan Attart laid down the design that was to connect the vehicle with the platform, and precise attachment points were defined on the axles and the chassis.

The engine and transmission were adopted from the Unimog. The OM 352, a six-cylinder diesel engine with a capacity of 5,675 cc, was given a prominent and clearly visible position on the front axle. It delivers 84 bhp - an impressive figure for the smart forfun2. The diesel version of the production car has a 41 bhp engine.

The dimensions also turn heads: tyres on 26 inch rims with a diameter of 140 cm. Not to mention ground clearance of 65 centimetres and an unbelievable total height of 3.7 metres.

The designers wanted to give the smart forfun2 maximum off-road mobility - and the platform of the 406 offers optimum prerequisites for off-road driving. The off-road character is further emphasized by oversized wheels and the safety cage made of aluminium tubes.

Everything in one car that is sure to divide opinions - or boys from men. Two vehicles, which each represent an uncompromising vehicle concept in their respective environments, and yet remain unique. And this combination in the smart forfun2 is sure to cause even more controversy.

As with the real smart fortwo, some people are sure to find the concept of the smart forfun2 too radical, whilst others will love it - with not many opinions in-between. However running apart from the herd is probably the best prerequisite for achieving cult status.