The revolution enters the next round – the all-new smart fortwo has undergone improvements in virtually all areas and is markedly more comfortable. Drive power is supplied by a state-of-the-art three-cylinder engine rated at 89 hp, while power transmission is performed by a five-speed manual transmission or the twinamic automatic dual clutch transmission. A host of innovative details guarantee even more fun in the city. The new smart generation was launched in Europe in November 2014 and is making its U.S. debut at the 2015 New York International Auto Show before arriving in dealerships in September. "As Europe's youngest car brand, smart enjoys global success today. No-one combines functionality and emotionality as well as we do, as the inventors of individual urban mobility. The new smart fortwo adopts the proven concept while offering more of just about everything – more space, more color, more equipment … and even more fun in the city! Only the vehicle length remains as unique as ever, at 2.69 metres (8.8 feet)," says smart boss Annette Winkler. "Our idea based on a total rethink of urban mobility has won through." 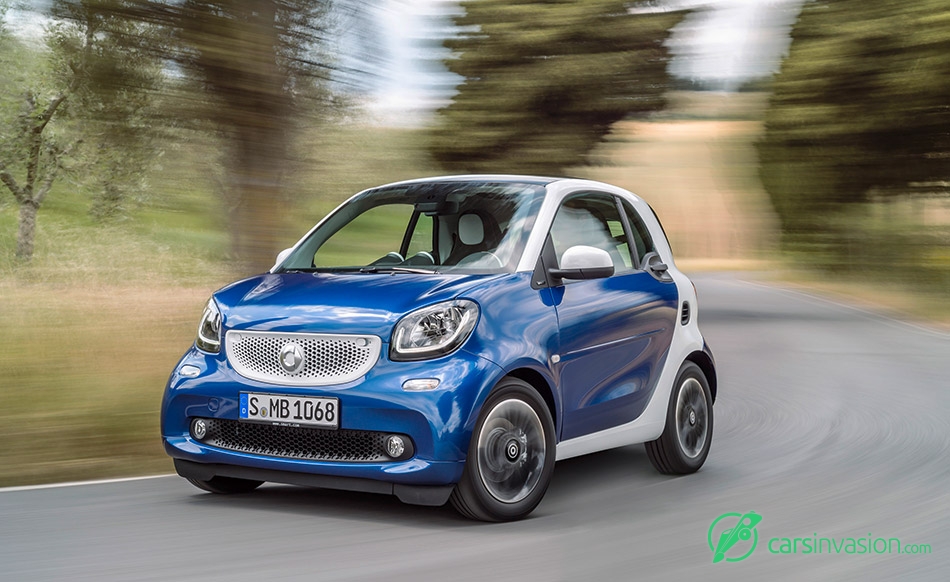 Short overhangs, minimal length, and high steering angle: The new smart fortwo has everything it takes to manoeuvre elegantly into any parking space - and around every corner, too. When it comes to the turning circle, the new smart fortwo sets a new benchmark: at 22.8 ft (from curb to curb) and 24 ft (from wall to wall) it makes turning manoeuvres extremely simple.

This new model also leads the way once again with regard to the maximum of space packed into minimal dimensions, as documented by the excellent body space index. Additional highlights include the folding front passenger seat backrest for maximum versatility.

The essential safety concept embodied so successfully by the preceding models has been retained. Like a nut, the soft interior is protected from harm by a rigid shell: the tridion cell. A high proportion of ultra-high strength hot-formed steels and maximum-strength multiphase steel is now used on the new smart. In keeping with the Mercedes-Benz "Real Life Safety" philosophy, the focus in car-to-car crash tests was on compatibility with substantially larger and heavier vehicles. The new smart vehicles performed well in frontal collisions with the S- and C-Class.

A new front axle design adopting elements of the previous Mercedes-Benz C‑Class, an optimized De Dion rear axle, substantially increased spring travel all round, tires with higher side walls and an unprecedentedly small turning circle are the highlights of the new chassis. The chassis and suspension of the new smart generation have been evolved on the basis of the experience acquired with previous smart models and designed for markedly enhanced ride comfort.

A state-of-the-art turbocharged three-cylinder engine will be standard on the new smart fortwo at the market launch:  The turbo engine is rated at 89 hp. The 898 cc engine mobilizes maximum torque of 100 lb-ft at 2500 rpm. The totally new turbocharger features an electronically controlled wastegate which enables increased engine dynamics in conjunction with a sustainable reduction in fuel consumption.

Apart from the turbocharger, a whole range of other technical measures also contributes to the engine's excellent fuel efficiency and performance. These include variable swirl control and variable adjustment of the inlet valves. Another defining trait of the all-aluminium three-cylinder engine is the square bore/stroke ratio.

Extremely short overhangs at front and rear – the new smart generation also possesses these typical proportions. And thanks to the 100 mm (3.9 inches) wider track, the wheels are positioned further outwards. These characteristic proportions offer outstanding visibility and agility and, together with the rear engine, enable a passenger cell accommodating an unrivalled amount of space in such compact dimensions. The color contrast between tridion cell and body panels is another characteristic feature of the smart brand. 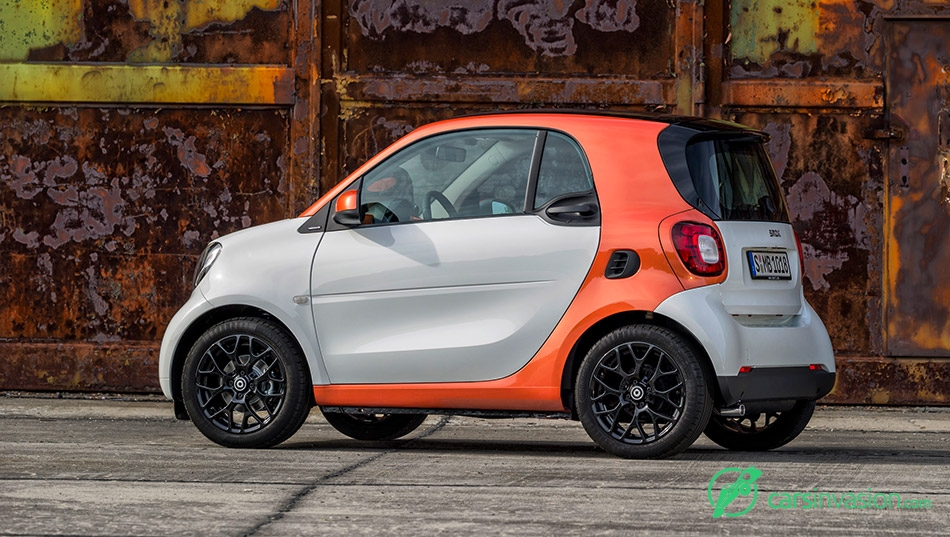 The smart designers refer to the evolutionary development of the silhouette as the "one-and-a-half box" design. A change to the previous one-box proportions became necessary for two reasons: the higher hood lends the smart a more grown-up and sportier character and offers greater pedestrian protection.

The smart fortwo features a friendly but self-assured face. A decisive feature of this friendly face is the signature smart grille, which is now slightly larger. The grill's perforated structure results from a honeycomb pattern. The honeycomb is paler towards the outside - the designers refer to this as fading. The radiator trim is available in a variety of colors to match the tridion, including black, cool silver and white. The second, black cooling air opening in the bumper also features the honeycomb pattern.

The markedly larger updated smart logo in the middle of the grille also demonstrates self-confidence. It is now three-dimensional and almost spherical in shape, harmonizing with the smart's distinctly more sensuous lines. The logo features a matte finish rather than a high-gloss look, similarly to all the sparingly applied chrome accents.

A loving attention to detail is demonstrated, for example, by the way in which the honeycomb pattern is cited in the headlamp covers. On the indicators, the honeycomb pattern even performs the function of dispersing the light. The hood also highlights the new sculptural lines, describing a powerful and sporty downward sweep between the headlamps.
The new smart fortwo is clearly recognizable as a member of the new smart family. It has a large door extending into the B-pillar with a frameless window. The typical smart genes are thus apparent from afar on the road: the striking door contours and the unique tridion cell. A characteristic swage line, such as features in the middle of the doors, underscores the brand image. This is followed by the fuel filler cap on the right and the air inlet for the rear engine under the B‑pillar on the left. As previously, the door is lined with a panel in high-quality lightweight plastic. This allows the king of the car park to shrug off any knocks and bumps from other road users.

A new feature on the smart fortwo is the pronounced shoulder line. This provides a firm look on the road and establishes a visual separation between the vehicle body and greenhouse.

The twin-section tailgate is close to smart drivers' hearts. The new smart fortwo thus boasts this special feature once again, enabling the vehicle to be loaded even in the tightest parking spaces.

The rhombic tail lights framed by the tridion cell are reminiscent of the first smart generation and combine with the large track width to emphasize the width at the rear. A unique LED scenario is optionally available in conjunction with the Lighting package: eleven individually illuminated cubes are allocated to each tail light, providing for a striking night design. The typical honeycomb pattern features once again in the clear glass over the indicators and reversing lights in the middle of the lamps.

Easy-going and charming – the interior design

"Loop" is the designers' name for the emotional sweep that features as a theme in the interior, embellishing the dashboard and doors. The sculptural dashboard itself consists of two sections - a bold and sensuous outer section which can optionally be covered with fabric, and a large, concave inner section incorporating the functional elements. In front of the dashboard, the instrument cluster and the infotainment center with radio/navigation appear to hover in front of the dashboard. The dashboard and the door center panels feature extensive fabric coverings in the three lines. This high-quality textile surface is very pleasant to the touch and is reminiscent of the mesh inserts in modern sports shoes. The mesh structure is a USP in this vehicle segment.

The color and material concept underscores the easy-going and charming character of the new smart generation, with the equipment lines standing for a distinctive and individual appearance. The sporty front seats with bold contours are designed as integral seats.

The instrument cluster and its semi-circular segmentation for speed and warning indicators cites the previous smart models, but in a new look. The striking spherical air vents are simple and fun to use. The centrally positioned air conditioning control unit also features an distinctive appearance: the desired temperature can be set on a scale in the middle with the aid of a sliding magnifying glass.

The doors take up the "loop" of the dashboard with their ellipsoidal sweep. The large armrest provides for comfort. The honeycomb pattern from the exterior is cited on the integrated loudspeaker and the tweeter in the mirror triangle.