The Honda Accord Coupe Concept reveals a totally new look for the next-generation Accord, along with key technologies for safety, fuel efficiency and performance, American Honda Motor Co., Inc., announced today at the North American International Auto Show (NAIAS) in Detroit. The Accord is Honda's best-selling model in North America and its debut at NAIAS marks the first time that an Accord concept vehicle has ever been shown at a major auto show.

The styling of the Accord Coupe Concept conveys a powerful stance through its long hood, deeply sculpted lower body and fastback roofline. A six-sided grille and projector headlamps that recess deep into the front fenders contribute to an unmistakable and aggressive front fascia. Quad exhaust outlets integrated into the rear diffuser further convey performance and style beyond any Accord to date.

"The Accord Coupe Concept demonstrates the styling direction for the upcoming, eighth-generation Accord," said John Mendel, senior vice president of American Honda. "As the industry's target for midsize segment excellence, the all-new Accord will set a new benchmark for safety, efficiency, performance, refinement and style." 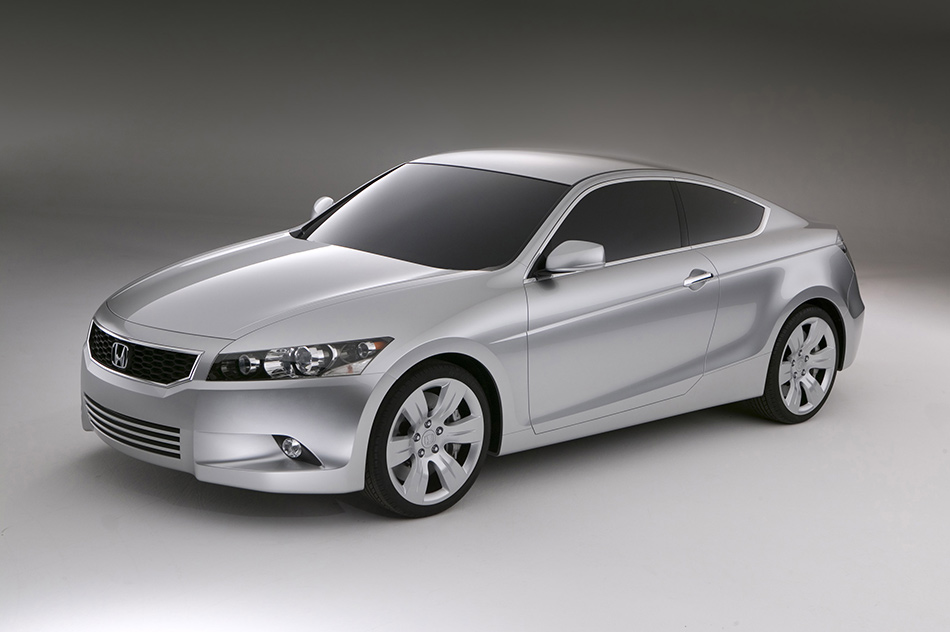 A more powerful and lower-emissions V6 engine will provide higher fuel efficiency with the incorporation of Honda's next-generation Variable Cylinder Management (VCM) technology. Honda leads the industry with the highest Corporate Average Fuel Economy (CAFE) rating for any full line manufacturer* of 29.2 miles per gallon - well above the industry average of 25.3 miles per gallon.

As part of Honda's "Safety for Everyone" initiative, all next-generation Accord models will include the company's Advanced Compatibility Engineering(TM) (ACE(TM)) Body Structure. Honda's ACE Body Structure incorporates a front-end frame structure that helps absorb and disperse crash energy over a large area in a frontal impact. ACE also makes the vehicle more crash compatible in frontal impacts with vehicles of differing ride heights.

The current generations of the Odyssey (2005), Civic (2006) and CR-V (2007) all have the ACE Body Structure. Together, the ACE-equipped vehicles represent more than 50 percent of all 2007 Honda vehicles sold on a sales-weighted basis. With the addition of the next-generation Accord to the lineup of vehicles with ACE, more than 75 percent will be equipped with the technology on a sales-weighted basis after it goes on sale.

The Honda Accord, currently in its seventh generation in 30 years, remains Honda's best-selling vehicle worldwide and has consistently been one of the top five best-selling automobiles in the U.S. Known for its ride and handling, comfort and convenience features, safety, quality and refinement, the Accord delivers world-class style with sophistication and performance. The Accord was launched in 1976 with subsequent major re-designs debuting in 1982, 1986, 1990, 1994, 1998 and 2003. More than 9.5 million Accords have been sold in the U.S. since 1976.

Car and Driver magazine named the 2007 Honda Accord as one of the winners of its prestigious and highly competitive annual "10Best Cars" award. The Accord has achieved "10Best" status 21 times in the 25 years that Car and Driver editors have been conducting the competition, more than any other vehicle in the award's history.