Volkswagen is presenting a further highlight of its product offensive in the top segment at the 35th Tokyo Motorshow: the production standard design study of the W12 Coupé with a 440 kW / 600 bhp (at 7,000 rpm) 12-cylinder engine. Having been adapted to suit individual requirements, the W12 engine will also be used in the Volkswagen luxury saloon in the future and in a premium off-road vehicle.

The six-litre, large twelve-cylinder engine is mid-mounted in this new concept vehicle which weighs just 1,200 Kilo. At 5,800 rpm it develops a maximum torque of 620 Newton metres. With a top speed of more than 350 km/h and an acceleration of less than 3.5 seconds to 100 km/h, the W12 Coupé is one of the most exclusive and fastest sports cars in the world.

The technology of the twelve cylinder engine integrated in the design study W12 Coupé: with a length of 513 millimetres, a height of 715 millimetres and a width of 710 millimetres, the engine is particularly compact. The capacity of the W12, which weighs just 239 kilograms, is 5,998 cm³. The basic layout of the W12 engine is made up of two very thin V6 four-valve modules which are configured at an angle of 72 degrees with a joint crankshaft with seven main bearings to make up a V-V arrangement, i.e. a "W". The cylinder angle is just 15 degrees within the two V6 banks. This makes the construction, which is very compact in comparison to V12 engines, possible. All the other construction details of the W12 engine are also an indication of top-level design. The variable intake and exhaust valve timing has a decisive influence on power development: the inlet camshafts can be continually adjusted through 52 degrees and the corresponding value for the exhaust camshaft is 22 degrees. 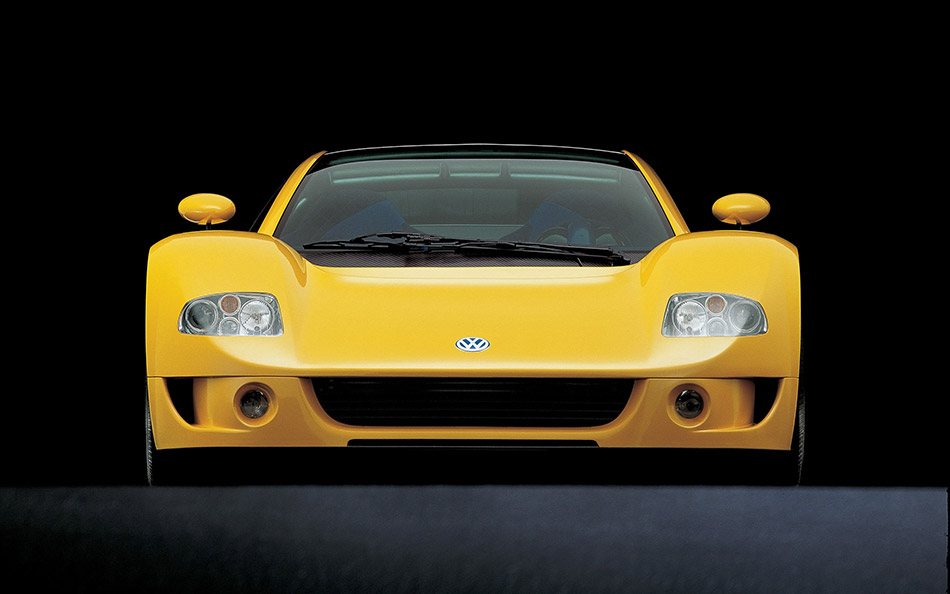 It is no wonder, when considering this technology, that a high priority was given to the performance of all materials in the development phase of the W12 engine. Volkswagen only uses engine oils of the Shell Helix family for the W12 Coupé, for example. The enormous power of the engine is transferred to the rear axle via a sequential and thus very fast shifting six-speed gearbox located behind the engine. This layout is very favourable for a classic sports car layout. The contact to the road is made via specially developed 19" magnesium wheels with 255/35 ZR front tyres and 275/40 ZR rear tyres.

The sophisticated front and rear axle with double wishbone suspension, numerous electronics modules, an ideal weight distribution of nearly 50:50 and an extended wheelbase of 2.63 metres ensure that the W12 Coupé is both fast and safe. The electronic stability program ESP and the traction control system TCS can be switched off for use in motor sport conditions. Ventilated Brembo brake discs with a diameter of 318 millimetres are fitted at both the front and rear. The electrically activated handbrake has been set up for an easy integration in standard production.

The long and flat body of the Coupé, with the restrained styling of the rear spoiler which automatically extends as of 120 km/h, transports the timeless elegance of Volkswagen design into the dynamic sector of the ultimate sports car. With a length of 4.55 metres and at more than 1.92 metres wide, the design study W12 Coupé has a very impressive appearance due to its dimensions alone. This is further underlined by the height of the two-seater vehicle - just 1.1 metres.

The design study drafted by Italdesign has been further refined in comparison to its two predecessors; newly designed headlights and rear lights echo even more strongly the characteristics of the future top class models from Volkswagen.

The sports car, finished in orange pearlescent, has two wing doors that open to the front and roof centre part made of special glass which extends from the windscreen through to the end of the engine compartment. The first glance of the W12 with its double V construction can be made through the transparent bonnet.

Leather, aluminium and carbon dominate the design of the new concept for the interior of the W12 Coupé. Seats, fittings and door trims have been finished, for example, with a black/grey suede and a colour coded smooth leather.

Furthermore, the red aluminium elements in the interior are eye-catchers. Volkswagen has used a new chemical process to achieve this tone and surface coating.

The layout of the instruments is classic. Two round main displays show the most important information such as speed and revs. The functions of the air conditioning system, the navigation system, the on-board computer and the car telephone are controlled via a colour display in the centre of the dash panel.

There is no doubt - all the details of the W12 Coupé are fully-functional and the concepts are close to production standards, as the second W12 Coupé being shown in Tokyo impressively demonstrates. It set many new international speed records on the high-speed course in Nardo, Italy during a long distance test.