Volkswagen unveils today during a press conference at the North American International Auto Show the concept T, a crossover vehicle blending a high-capability off-roader and an equally uncompromising sports car. With this automobile, Europe's most successful auto manufacturer is showing how the off-road and sports car worlds can be combined in future to produce a new and fascinating facet of the automotive experience - the off-road coupe.

Volkswagen enjoys a long tradition of world premieres for innovative and surprising concept cars in Detroit: In this arena, the concept 1 (concept for the New Beetle), the AAC (concept for Touareg) and the avant-garde Microbus among others made their debut. Until now, no sports car has been flexible enough in terms of drive properties to allow for driving off paved road surfaces. The concept T fills this gap. The off-road coupe is equipped with wing doors and harmonizes the fascination of a thoroughbred sports car with the variability of a true off-roader, thereby bringing completely new lifestyle and leisure values within reach. 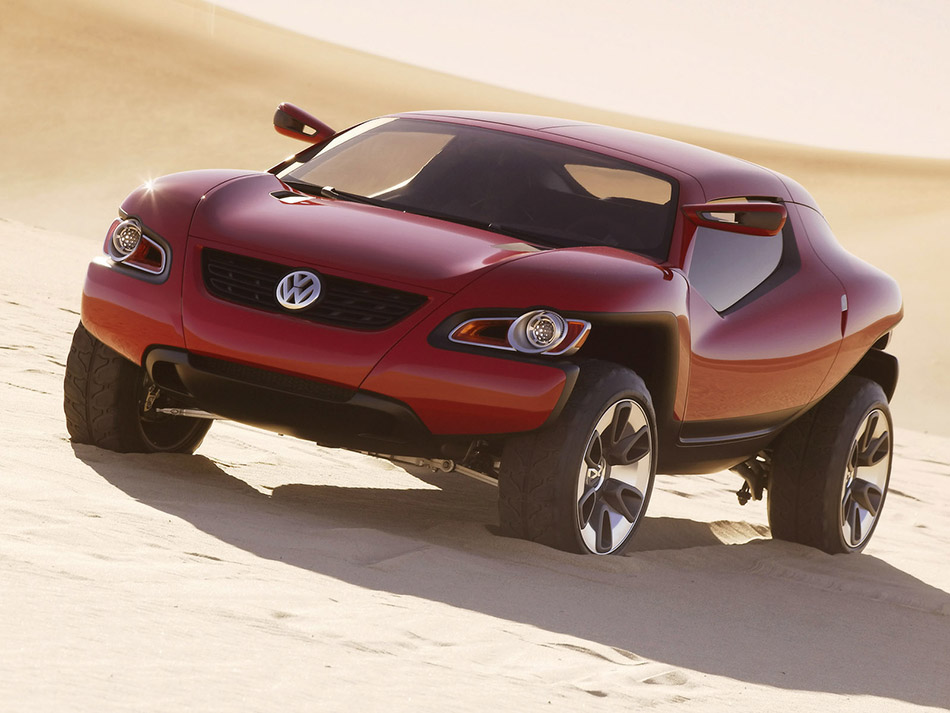 The wing doors are a highlight of the body both in terms of styling and technology. When opening, they simultaneously swing outwards slightly and move upwards steeply. The advantage: getting in and out is made especially comfortable, while the doors require comparatively little space out to the side when opened. The two halves of the roof at the front (T-bar roof) of the concept T can be removed in only a few motions. The rear roof module is constructed as a hardtop with integrated trunk lid, but can be removed as well to reveal even more of the sky.

Seen from the front, the concept T is characterized by its V-shaped radiator grille integrated in the bumper, as well as by the eye-like headlights. The headlights "float" between the bumper and the fenders in order to emphasize the off-road character of the car. The fenders themselves have wide cut-outs. The overall effect is that the 19 inch wheels are free-standing.

The body overhang at the rear is even shorter than at the front. Here too, the tail light assemblies "float" and are integrated in the bumper and wings. The striking stainless steel tailpipes of the exhaust system are located inboard to the tail lights. This high position offers the advantage that the tailpipes do not restrict the ramp exit angle for off-road driving.

Viewed from the side, the design of the rear fenders is that of a classically curved hip. In the rear area, the extremely wide fenders form muscular haunches; towards the front, their flank line blends seamlessly into the outer door panel. This line is stretched like a bow string over two thirds of the off-road coupe and ends in the middle in front of the front wheel arch. Taken together with the end point of the front door, this creates an arrow-shaped design which emphasizes the dynamic properties of the car.

The interior of the off-road coupe is also progressive with its ergonomic aluminum flex shell seats. The concept car has a sporting, purist interior, in which a soft plastic material with a satiny surface structure is used for the fittings, door trim and seats. This "outdoor trim" can be exchanged for a leather "downtown trim" using quick-release fastenings. In addition, the interior offers the highest degree of variability: There is plenty of storage space under the station wagon-like rear section either for the outwardly visible spare wheel and luggage, only for luggage or for a second row of seats plus luggage.

The information in the cockpit is projected onto a head-up display. Another new feature is the type of data communication and the individual settings in the concept T: The Personal Mobility Gateway (PMG) is a wireless communication unit. It resembles a palmtop computer (PDA) in terms of form and function. The driver and passenger can use the PMG to control functions such as the air-conditioning. In addition, they can take the PMG with them out of the concept T and use it as a PDA for controlling the telephone, high-speed Internet and e-mail access as well as the MP3 player and the navigation system.