The Golf GTI Pirelli is back; a powerful, fast and very exclusive GTI. Volkswagen is continuing the history of one of the best known limited edition models in Europe. In May 1983, the "Original Pirelli" arrived on the market. It was based on the first generation, second series Golf GTI. A distinctive identifying feature: Specially designed alloy wheels with the "Pirelli P" on their outer edges. A remarkable 10,500 cars of the special model were built and sold within half a year. Then it was over – a limited edition! If there were an Automobile Hall of Fame for young-timers, the "Pirelli GTI", as it was called by its fans, would have long held a place there. 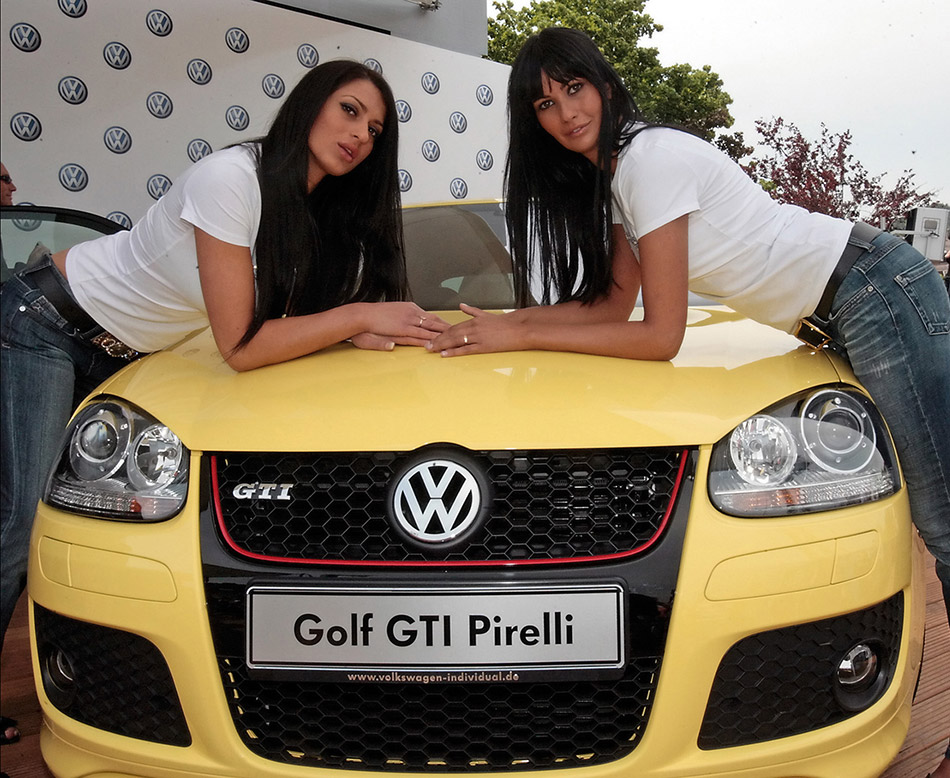 The legendary tire tracks of the young-timer are now being extended by the new Golf GTI Pirelli. And indeed with completely new Pirelli high-performance tires too. They are wrapped around powerful 18-inch Pirelli wheels in Titanium look. The car's interior has been upgraded with a partial-leather sports seat system that has an embedded tire tread pattern. Instead of the previous 112 PS the new car converts 230 PS into forward propulsion. If needed, a 245 km/h top speed is within the car's capabilities. In 6.8 seconds the Turbo-FSI propels the GTI Pirelli to 100 km/h from a standstill.

The Golf GTI Pirelli, conceptualized by Volkswagen Individual, will be presented in a worldwide debut between May 16 and 20. The occasion and site of this premiere are a perfect fit: The international GTI Meeting at Wцrthersee, Austria. Production will begin in September.

A look at the numbers gives it away: 169 kW / 230 PS – those are the same performance values as the engine in the Golf GTI Edition 30 that arrived on the market in 2006 on the occasion of the GTI's monumental birthday. The 200 PS of the "normal" GTI were boosted by one PS for each year since 1976. Now this "jubilee engine" is also powering the Golf GTI Pirelli. The sports car races to the 100 km/h mark in just 6.8 seconds. But it can go even faster: When the GTI Pirelli is ordered with the optional DSG dual clutch transmission, the most powerful GTI of all times breaks through the magic "sound barrier" in 6.6 seconds. The GTI philosophy of agility is accompanied by the efficiency with which this Turbo-FSI goes to work: 8.2 liters of fuel per 100 kilometers, or 7.9 liters with DSG, are evidence of the virtuosity with which Volks­wagen masters the keyboard of engine building.

Tires and wheels of the Golf GTI Pirelli.

"Power is nothing without control", says Pirelli. Volkswagen sees it this way too. Chassis, brakes and ESP combine for a well-balanced safety package that can even perform masterfully on the North Loop of the Nuremburg Ring track. But things do not really get rounded out until the tires come into play. That is why Pirelli is contributing a new high-performance tire to the project: The latest generation of P-Zero tires. The material mixture and tread pattern of the 225/40 P-Zero were designed to benefit handling, braking, ride comfort and aquaplaning properties.

As in 1983, the tires are wrapped around Pirelli alloy wheels. They are coated with a Titanium-colored paint. The manufacturer interprets the visual effect of the five spokes as an homage to the wheels of the first Pirelli GTI. They had openings in the form of a P for Pirelli on their outer edges. This P is also found in the new wheel design – but in this case it is reflected: In the rim flange. However, there are worlds of difference between the dimensions of the two types of alloy wheels: They are 7.5x18 inch today, but were 6x14 inch back then.

Body of the Golf GTI Pirelli.

Bumpers and side skirts painted entirely in car color visually set the Golf GTI Pirelli apart from the 200-PS GTI. Recall that on this classic GTI, introduced at the end of 2004, the spoiler in front, the lower bumper section in the rear, and the skirt between the wheel housings on the sides were in black. Similar to the GTI Edition 30, a plate with the Pirelli signature on the right side of the tailgate is a reference to this exclusive Golf GTI. In its side profile, the new car has standard tinted rear windows and another Pirelli signature can be seen here on the C-pillar of each side. Designers coordinated the color of the signature to the body paint color. Four of these are offered on the Golf GTI Pirelli. If "Blue graphite" or "Black magic pearl" is selected, the Pirelli signature is in silver. If the GTI – available as a two-door or four-door – is ordered in "Sunflower" or "Reflex silver", there is a black signature. "Sunflower" – a bright yellow – was created especially for this GTI. So if you look in your rearview mirror this coming fall and see something yellow with a black radiator grille growing larger very quickly, it can only be one thing: The Golf GTI Pirelli.

Interior of the Golf GTI Pirelli.

Just as distinctively as on the GTI Edition 30, the GTI Pirelli stands out from the rest of the model series with its refined interior. Take the example of the sports seating system: The standard GTI seats developed by Volkswagen Individual were upgraded to perfectly customize them for the GTI Pirelli: The anthracite colored lateral supports, seatbacks, head restraints and center armrests are upholstered in leather ("Vienna" type); yellow decorative seams provide a fine visual contrast. But the real highlight is the center seat panels. They are not made of the usual GTI "Interlagos" diamond pattern, rather of a breathable and very luxurious microfiber from the Italian producer Miko ("Dinamica" type): The tire tread pattern is embedded in the microfibers, which also sport the anthracite color. There is yet another accent in the front head restraints. Where the "GTI" letters are usually found, in this car the lettering is "Pirelli" throughout.

"Pirelli" equipment features also include heated seats, electrically adjustable lumbar supports in front, and all-leather center armrest in the rear. Under its counterpart in front, there is a storage bin that may be used optionally to house a CD-changer or MP3 player.

The leather sports steering wheel and parking brake grip have been retooled to match the top sports seats: They also have decorative yellow seams. In addition, the steering wheel with ergonomic hand recesses and perforated leather here support a sporty driving style. The vertical spoke of the steering wheel has a metallic Pirelli emblem as an accent.

Engine of the Golf GTI Pirelli.

It was 25 years ago when Volkswagen first introduced the era of downsizing on its first turbo-diesel. Of course, the Turbo-FSI on the GTI is technically unrelated to a turbo-diesel, but they have the principle of downsizing in common – in both cases engine displacement is replaced by engine charging. Approximately one decade after the first turbo-diesel, the direct-injection TDI followed. This engine extended the principle of downsizing to include the aspect of direct injection. This mix of technologies yielded lower fuel consumption and emissions, and more torque and power. On the Golf GTI, Volkswagen has transferred its 2004 downsizing concept to a powerful gasoline engine for the first time; its use of a turbocharger with intercooler plus direct injection brings fuel economy and sportiness in greater harmony than ever. The proof of this is measurable: The 147 kW / 200 PS and 280 Newton-meter strong Turbo-FSI of the "normal" GTI attains a top speed of 235 km/h and takes 7.2 seconds for the sprint to 100 km/h. Average fuel consumption: Exceptionally low for a sports car at 8.0 liters per 100 kilometers. If the GTI is shifted by DSG, fuel consumption is reduced to 7.9 liters.

The Golf GTI Pirelli is proof today of the potential in combining gasoline direct injection and charging. Its turbocharged direct-injection gasoline engine is currently the most powerful four cylinder engine from Volkswagen. This front-mounted transverse engine is shifted by a standard manual six-speed gearbox. The 16-valve four cylinder with 1,984 cm3 displacement outputs its maximum power of 169 kW / 230 PS at 5,500 rpm. Its maximum torque of 300 Newton-meters is available over a large speed window – from 2,200 to 5,200 rpm. Nothing is more befitting a sports car than this sort of torque characteristic.

And the efficiency of the charged VW direct injection gasoline engine is measurable here too. In spite of an extra 30 PS, 20 Newton-meters and 10 km/h top speed, compared to the 200-PS version the manually shifted Golf GTI Pirelli consumes just 0.2 liters more fuel per 100 kilometers. When shifted by a DSG dual clutch transmission, its fuel consumption is even identical at 7.9 liters per 100 kilometers!