On its new Touareg Volkswagen is introducing one of the cleanest diesel engines in the world: The BlueTDI with SCR catalytic converter. This converter reduces nitrogen dioxide (NOx) emissions by up to 90 percent. The Touareg BlueTDI, that delivers 165 kW / 225 PS, meets even the most challenging exhaust emissions standards.

Currently, the lowest limits are set in the US states California, Massachusetts, New York, Vermont and Maine: In the "Tier2 Bin5" standard. The Touareg BlueTDI being presented in Geneva is one of the first vehicles with a diesel engine that can clear this hurdle too. Especially in the USA, economical turbo-diesels like the V6 BlueTDI can contribute, more than any other current powertrain technology, toward reducing oil consumption and the generation of climate-impacting greenhouse gases.

Therefore, Volkswagen will be offering the Touareg with SCR catalytic converter starting in 2008, initially in the USA, as part of the BlueTec Alliance started together with Audi and DaimlerChrysler at the end of last year. Also slated for 2008: The company for smaller vehicles like the Jetta will introduce, in America, a NOx storage catalytic converter that eliminates up to 90 percent of nitrogen oxides. The two technically challenging systems are scheduled to debut in Europe a short time later. 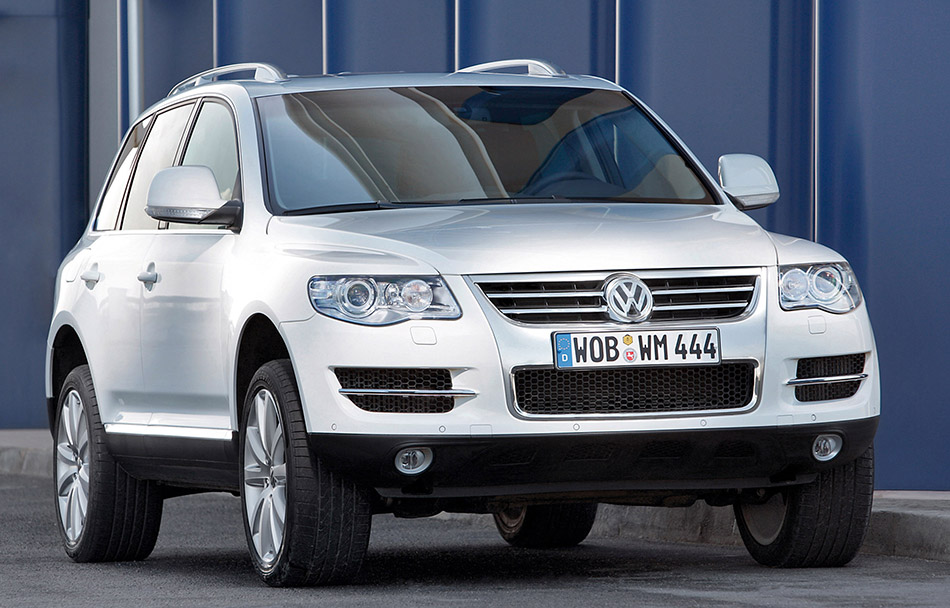 SCR is the usual international acronym for "Selective Catalytic Reduction". "Selective" refers to the fact that this catalytic converter has a very special task. Its purpose is to selectively convert the nitrogen oxide (NOx) exhaust components to nitrogen and water without generating any undesirable side products. It was developed precisely for this highly specialized task. Therefore, in the future vehicles such as the Touareg BlueTDI, being shown for the first time in Geneva, will also be equipped with an oxidation catalytic converter and a diesel particulate filter.

The nitrogen oxides are converted utilizing a synthetically produced, water-based urea solution, e.g. AdBlue, which is stored in an auxiliary tank on the Touareg BlueTDI. The substance, consisting of 32.5 percent urea, is continuously sprayed into the exhaust stream before the SCR catalytic converter. It is metered based on the mass flow of the exhaust. Engine management ensures precise regulation, based on information from a NOx sensor located after the SCR catalytic converter.

Atomized into a fine spray by a screen, the urea is transformed in the hot exhaust gas stream upstream of the catalytic converter. In the SCR catalytic converter this reacts with the nitrogen oxides and splits them, as described, into nitrogen and water. The water-based additive AdBlue is non-toxic, odorless and biodegradable.

AdBlue is consumed at an average rate of about 0.1 liter per 100 kilometers. Consumption and tank size are sized so that the AdBlue supply does not need to be replenished until the next scheduled service.

Besides introducing the SCR catalytic converter, the engineers at Volkswagen Automotive Group have put together an entire bundle of innovative modifications. Combustion chamber sensors are being implemented for the first time; they monitor pressure conditions in the cylinders. And a new common rail system with 2,000 bar injection pressure atomizes the fuel even finer. The ideal combustion achieved by these measures enhances smooth engine running and lowers overall raw emissions.

In the effort to reduce emissions, especially NOx raw emissions, efforts being made in internal engine modifications include measures to lower maximum temperatures in the combustion chambers and to reduce oxygen concentration by exhaust gas recirculation. Nitrogen oxides generated despite these measures are fed to the new SCR catalytic converter and are removed, as outlined above.

As engineers began to develop the BlueTDI, their first goal was to achieve further overall combustion optimization in the engine. The world premiere of such an innovation is being celebrated in the BlueTDI – the combustion chamber sensor. Integrated in the glow plug, the sensor continuously measures pressure conditions in the cylinder and reports the data to engine management.

This enables perfect control of injection and combustion in each cylinder; it is even possible to compensate for fluctuating qualities of fuel. Ideal combustion helps to reduce raw emissions. It also optimizes smooth running and noise behavior.

The intensively refined common rail injection system serves the same purposes. With a newly designed pump, the system builds up 2,000 bar of pressure – also an innovation. The piezo injectors have been significantly modified too. Their smaller eight-hole nozzles inject miniscule spray volumes into the combustion chambers. This, together with the higher pressure combine to produce an injection that is even more precise and dynamic – detailed work that as a whole has resulted in one of the most economical and cleanest six-cylinder diesel engines in the world.