MG Rover Group announces a bold new extension to its small car range - the Streetwise. Due to commence sales in the UK towards the end of August, the new Streetwise is a specialised range based on the popular Rover 25 platform, but offering a distinctive new personality of its own. Designed to complement the existing Rover car range while significantly broadening the marque appeal, Streetwise is in tune with a growing European sub-sector for small cars with an 'urban-tough' attitude.

Streetwise features large wheels and raised suspension for greater ground clearance and a higher viewpoint. For extra toughness and durability, it has robust moulded bumpers, wheelarch protectors and rubbing strips all in a scratch-resistant dark grey-grained finish. Standard fit roof bars on all models offer a versatile carrying facility to complement the spacious interior and boot.

Inside, Streetwise has its own specially-designed seating and trim treatment, with individual front and rear storage plus individual sports-style seating for four as standard, yet it retains a practical and versatile 60/40 split folding rear seat squab. 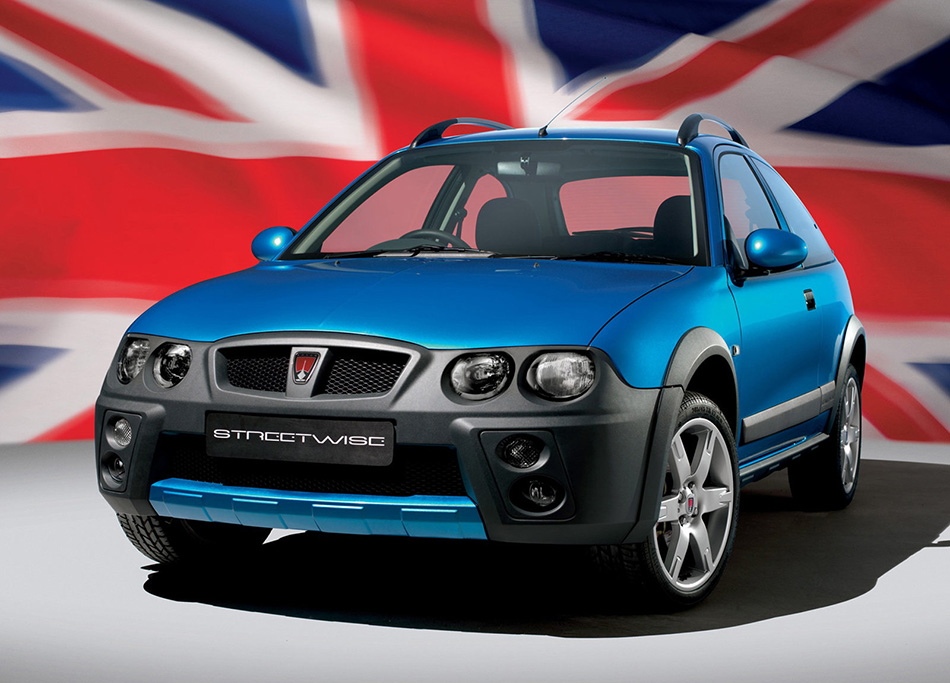 Streetwise will be available with a selection of petrol and diesel power units, various transmissions and three trim levels. Market launches will be progressive and in the UK initial launch stock will feature the twin-cam alloy 1.4 litre K Series petrol engine in both 84Ps and 103Ps tune plus the 101Ps L Series turbo-diesel unit, all with 5 speed manual transmissions. Phasing in after launch will be an additional petrol engine with manual transmission, and a 1.8-litre K Series unit with Stepspeed CVT automatic transmission. Other markets may take different power train options.

Reflecting the role of Streetwise in developing the Rover brand, it is the first model to use a new modernised version of the classic Rover 'Viking Ship' badge.

The Market for Streetwise

European small car sales grew strongly during the 1990s and are now steady at around 3.5 million units each year across the top nine markets. Last year in the UK, one in three of all new car sales were in the small and supermini sector. There is an increasing trend with small car buyers to seek a more 'personalised' variation in style and configuration. One of the emerging themes is for what Rover calls an 'urban on-roader'. Streetwise meets this brief - it is robust, versatile and stylish, a small car that's fun to drive, handy in traffic, easy to park and able to shrug off hard use by active individuals and young families. It has elements of the SUV appeal, with good ground clearance and ruggedness, but without the costs and complexity of 4x4 transmission. At the same time, it offers good all-round performance and capability out of town, from motorways to farm tracks.

Presenting an entirely new 'direction' for a Rover, Streetwise has the front bumper and grille formed in a tough unpainted grained moulding. The same resilient material, resistant to chipping and scratches, is used for the wheelarch spats, sill mouldings, side rubbing strips, rear bumper and tailgate lift handle.

Front and rear bumpers feature a contrasting insert for the lower central section with body colour on trim level 3 derivatives, (the alternative finish is an option in each case).

Beefy roof bars, securely bolted to the roof on all Streetwise models, are similar to those fitted to the Rover 75 Tourer, and accept the same kind of cross bars and carrying systems for loads up to 65 kg.

In keeping with its extrovert character, Streetwise offers up to twelve exterior paint choices from the strongest colours in the MG Rover palette, including the vivid Trophy Yellow and Trophy Blue finishes.

Inside, Streetwise has, as standard, a unique four-seat configuration, with front and rear sports style individual seats. Between the rear seat cushions is a special central console with storage cubbies. Ingeniously, the folding seat squab retains the useful 60/40 split to allow four different cargo/passenger-carrying arrangements.

For those needing five seats, there is the option of a normal bench rear seat, with 60/40 split folding squabs and three lap and diagonal seat belts.

'Monaco' seat fabric is used for the first two trim levels while a 'Sebring' fabric and leather seat trim with optional red or blue accents is standard on trim level 3 and optional on the others. All models feature a 'Puma' interior environment with silver accents around the switchpack.

There are distinctive blue instrument graphics, and the new circular front ashtray can be transferred, if required, to the cup holder section of the door pocket.

It all adds up to an attractive new package that was warmly received by market research focus groups, who saw Streetwise as sleek, sporty and modern, a car which combined fun with practicality.