The latest member of Volkswagen's seventh-generation Golf family, the Golf SportWagen, goes on sale in U.S. dealerships in April 2015, starting at $21,395 for the 1.8T S model with manual transmission. Volkswagen SportWagen models have long been a top choice for customers who want a versatile and dependable vehicle that provides a sportier driving experience than compact SUVs. Based on the Modular Transverse Matrix (MQB) architecture introduced with the latest Golf generation, the SportWagen replaces the Jetta SportWagen and follows the winning formula introduced with the new Golf line that won the 2015 Motor Trend Car of the Year and the 2015 North American Car of the Year awards. Being bigger yet lighter and more powerful yet more fuel efficient, the SportWagen improves upon its predecessor in every way.

The Golf SportWagen will be offered with two powertrains: the EA888 1.8-liter, 170-horsepower turbocharged and direct-injection four-cylinder TSI® engine mated to a five-speed manual or a six-speed automatic transmission; and the EA288 2.0-liter, 150-hp turbocharged and direct-injection four-cylinder TDI® Clean Diesel, fitted with a six-speed manual or a six-speed DSG® dual-clutch automatic transmission. 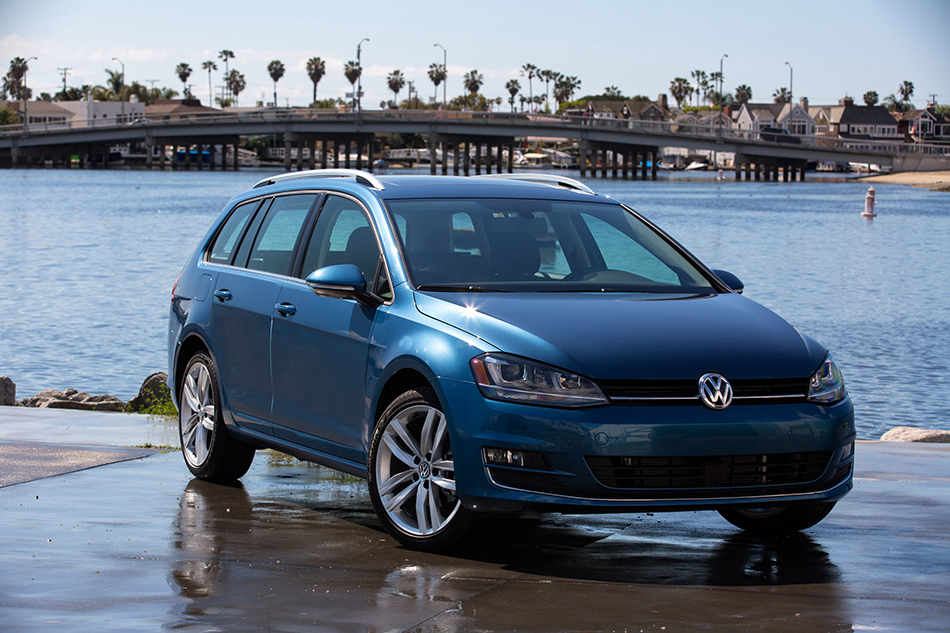 The 1.8T model with manual transmission has EPA estimated highway fuel economy of 36 mpg, while the TDI Clean Diesel model with the stick shift gets an impressive 43 highway mpg according to EPA estimates. These figures better all non-BEV compact SUVs on the market, while offering comparable cargo volume—30.4 cubic feet behind the rear seats and 66.5 cubic feet with the seats folded flat.

The 2015 Golf SportWagen is treated to the same sharpened lines and updated proportions as the other seventh-generation Golf models. That's because the SportWagen was always intended to be an integral member of the A7 family from the moment the first sketches were drawn at the Volkswagen design studio—led by Walter de Silva (Volkswagen Group Design) and Klaus Bischoff (VW Brand Design).

The SportWagen is wrapped in sheetmetal that is totally modern yet unmistakably part of the Volkswagen Golf DNA. The shape and design elements remain as defined and recognizable as ever, although distinctive elements such as the D-pillar, the roof rails and the unique rear design differentiate the SportWagen from the Golf hatchback. The front end features a hood that slopes down into the front fenders and sports angular horizontal design cues and a slender radiator grille. At the back, the wide rear window, geometric two-part taillights and a wide, low tailgate that integrates the license plate area pay homage to the outgoing Jetta SportWagen and solidify the new car's place in the Golf family. With a load height of just 24.8 inches and a wide aperture of 40.6 inches, the new Golf SportWagen is even more practical than its predecessor.

At 179.6 inches long and 70.8 inches wide, the Golf SportWagen is 1.1 inches and 0.7 inches larger than the Jetta SportWagen, although overall vehicle height has been reduced by 1.1 inches. These changes help improve the aerodynamics and thus the fuel efficiency, while giving the car really sporty proportions. Thanks to the MQB architecture, which dictates a fixed relationship between the front-wheel centerline and the pedalbox, the front wheels now sit 1.7 inches further forward, giving a premium "cab backward" aesthetic. Along with the new styling, these updated proportions help the SportWagen achieve a lower visual center of gravity and a more dynamic stance.

The SportWagen TSI S model is equipped with 15-inch aluminum-alloy wheels, while the base TDI S gets treated to 16-inch wheels. The SE trimline has 17-inch wheels for both TSI and TDI models, while the topline SEL trims have 18-inch alloys. A panoramic sunroof is standard equipment on all trim models except the S and the SEL has silver roof rails to set it apart from its S and SE brethren.

In addition to the foglights that are fitted on the SE and SEL models, a standalone lighting package is also available for these trims. This package consists of Bi-Xenon headlights and LED daytime running lights, as well as the Volkswagen Adaptive Front-lighting System. This system swivels the main headlight beams by up to 15 percent as the steering wheel is turned to illuminate bends in the road more effectively at speeds of more than 6 mph.

The upscale environment of the SportWagen cabin is largely shared with the Golf models upon which it is based, but interior volume is increased because of the wagon bodystyle. Occupants are treated to 94.3 cu ft of passenger area volume, up from 91.7 cubic feet for the Jetta SportWagen.

As a result, key interior dimensions have been optimized. Rear-seat leg- and shoulder room are excellent, at 35.6 and 53.9 inches, respectively. Front seat passengers also benefit from the SportWagen's spacious interior, with 41.2 inches of legroom and 55.9 inches across the shoulders. Although the new wagon's overall height has been decreased by 1.1 inches, both front and rear headroom have been improved to 38.6 inches. 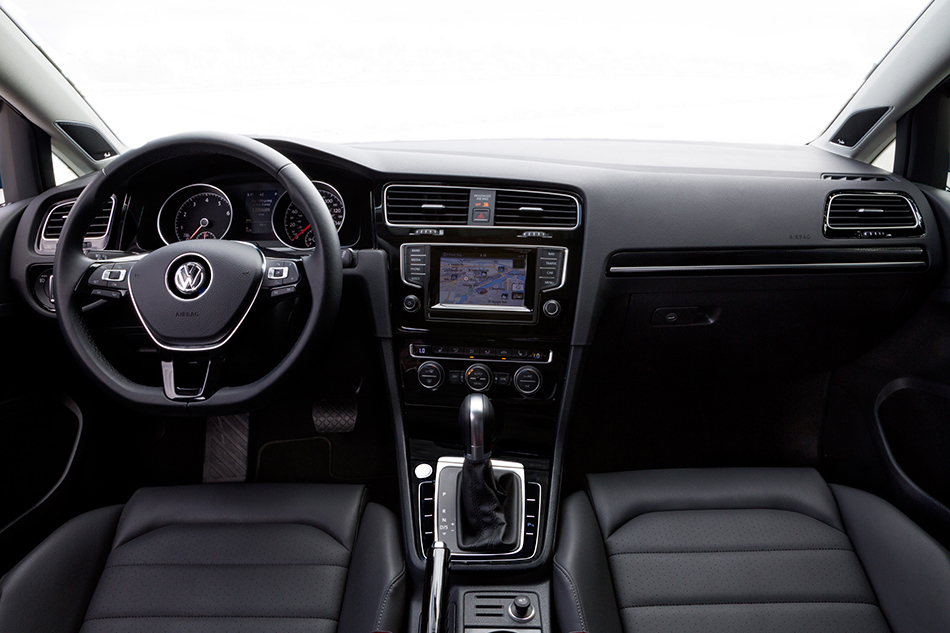 The SportWagen has a cavernous trunk that's in line with those of compact SUVs. With the rear seats up, the SportWagen boasts 30.4 cu ft of space: when the 60:40 split rear seat is fully folded, that figure rises to an enormous 66.5 cu ft of storage. The split folding rear seats are now accessed by release levers in the cargo area, maximizing convenience.

In addition to the expansive interior space, the driver controls are positioned for optimal ergonomics and usability. Seat placement, shifter height and even the spacing between the pedals have all been fine-tuned as well. This new driver-centric design focus is evident from the center stack, which is now angled towards the driver, a feature frequently seen in premium luxury or performance vehicles. White backlighting for the controls further highlights this upscale ambience, as well as the use of premium materials throughout, such as the leather-wrapped handbrake, shifter knob and steering wheel, the soft-touch plastics and piano-black trim.

An equal amount of attention has been paid to maximizing comfort and convenience, even on the entry-level S trim. In addition to its standard V-tex leatherette seating surfaces, this base model comes well equipped with a long list of modern comfort, convenience and entertainment features, including power windows, locks and mirrors, a multifunction steering wheel, Bluetooth® technology and VW Car-Net® connected car features, and a Media Device Interface (MDI) with smartphone connectivity.

The SportWagen's touchscreen infotainment center, standard on all models, is shared with the rest of the Golf family. The 5.8-inch touchscreen display utilizes a capacitive touch sensor (as in smartphones, tablets, and the like) rather than the more common resistive touchscreens that require pressure, enabling gesture controls like swiping and even pinch-zooming.

This infotainment module offers an available navigation system, as well as the expected audio functions (including standard SiriusXM® Satellite radio) and car analytics and settings. This display also has a proximity sensor function, which senses when a hand is nearby and automatically switches its display to a more finger-friendly layout. The MDI is now housed in the center stack, while more traditional media such as CDs and SD cards can be inserted into slots in the large glovebox.

Like the rest of the seventh-generation Golf family, the Golf SportWagen features compact turbocharged and direct-injection engines throughout the entire trim range. The TSI gasoline unit is a member of the latest EA888 engine family and replaces the 2.5-liter five-cylinder engine of the previous Jetta SportWagen model. This 170 horsepower1.8-liter turbocharged and direct-injection four-cylinder TSI engine is mated to either a five-speed manual or a six-speed automatic transmission. When equipped with the six-speed automatic transmission, the Golf SportWagen's EPA estimated highway fuel economy has improved by 5 mpg over the previous 2.5-liter Jetta SportWagen, to 35 mpg. The EPA rating for the manual transmission model is 36 mpg on the highway.

The TDI Clean Diesel model is powered by the new EA288 150 horsepower, 2.0-liter turbocharged and direct-injection diesel engine, driving the front wheels through either a six-speed manual or a six-speed DSG® dual-clutch automatic transmission. Compared with the previous Jetta SportWagen's TDI Clean Diesel engine, EPA estimated fuel economy is improved from 42 mpg on the highway for the manual transmission model to 43 mpg, and from 39 mpg for the automatic transmission model to 42 mpg.