The new Passat is one of the most innovative cars in its class. Equipped with progressive drive, assistance and infotainment systems, it is high-tech encapsulated in a powerful design with sharp proportions. The eighth generation Passat is currently being launched in Europe, and already, Volkswagen has come up with something more: the German car maker is showing the Passat GTE in a world premiere at the Paris Motor Show – the first Passat with a plug-in hybrid drive system. 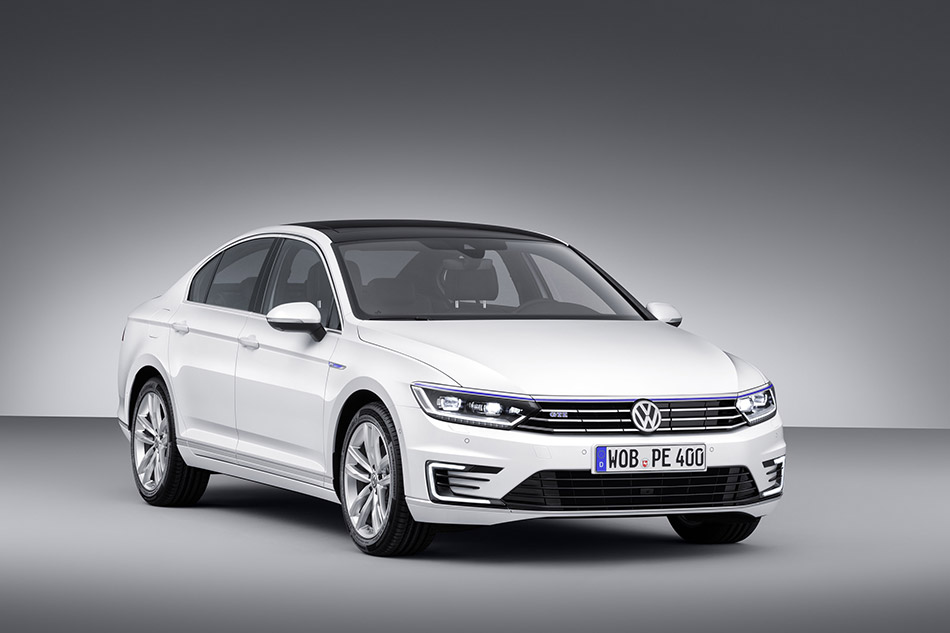 It is a zero-emission and long-distance vehicle in one and available as a saloon or estate. In GTE mode, the Volkswagen also has a sporty side. Plug-in hybrid, in this case, means the combination of a turbocharged direct injection petrol engine (TSI) with an electric motor, which is supplied with energy from an externally (or in Charge mode) chargeable lithium-ion battery. Thanks to this battery, the Passat GTE can cover a distance of up to 31 miles in all-electric mode and thus with zero emissions. At the press of a button next to the gear lever, the driver can also control the all-electric mode ("E-Mode") at will – for example, at the end of a drive when the destination is in a city.

A contrast to the "E-Mode" is offered by the mode "GTE", which is also accessible at the press of a button – in this mode, the Passat delivers a maximum system output of 160 kW / 218 PS; a wide variety of parameters such as the accelerator pedal and steering are also configured in a sportier way in this mode. The 1.4-litre TSI engine develops a power of 115 kW / 156 PS (as of 5,000 rpm); the electric motor produces 85 kW / 15 PS. The maximum torque of the plug-in hybrid drive system is 400 Nm. Performance and power are deployed both efficiently and in an eco-friendly  way: The NEDC consumption (for hybrid vehicles) is over 141 mpg (under 2.0 l/100 km) and 13.0 kWh/100 km; these values equate to CO2 emissions lower than 45 g/km. In combination with the TSI, this results in a driving range of over 620 miles with a full 50-litre fuel tank and fully charged battery – with it, the Passat GTE covers the route from Paris to London and back without refuelling.

The pioneering low power/fuel consumption and emission values contrast with a powerful driving performance: the Passat GTE, always with front-wheel drive and equipped as standard with a six-gear dual clutch gearbox especially developed for the hybrid drive, accelerates to 62 mph in less than 8.0 seconds and achieves a top speed of more than 136 mph; in "E-Mode," 80 mph.

The Passat GTE will be launched in the second half of next year – both as a saloon and an estate. With the market launch of the plug-in hybrid, a total of nine drive versions, covering a power range from 92 kW / 125 PS to 206 kW / 280 PS, will be available for the European version of the Passat. All versions meet the EU 6 emissions standard. The Passat GTE also constitutes an integral part of the strategy for electric mobility at Volkswagen. After the XL1, e-up!, e-Golf and Golf GTE, the Passat GTE is the fifth, or sixth model (saloon and estate) that can be operated by electric motor with zero emissions. 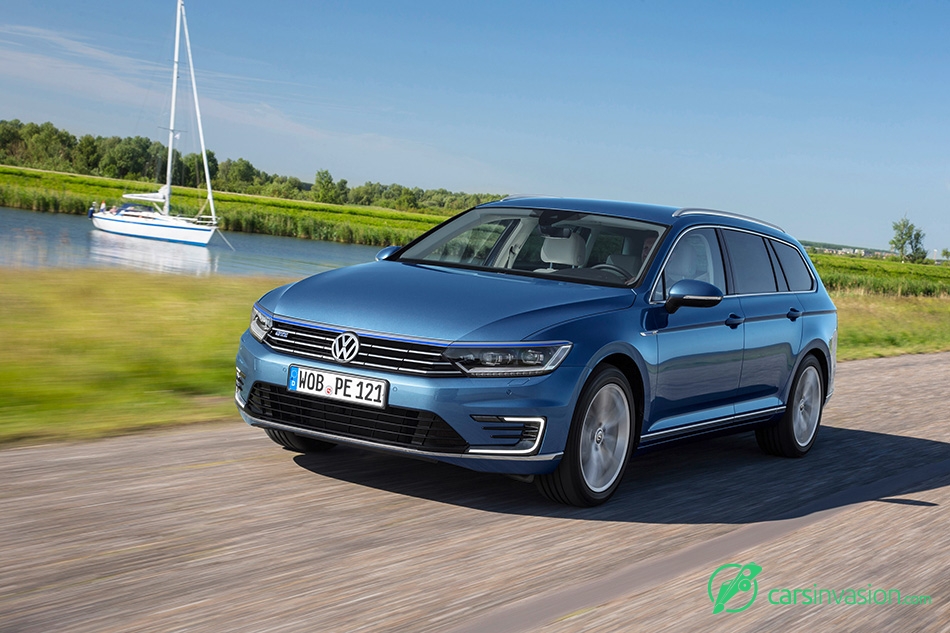 The Passat GTE is an independent equipment line. On the one hand, its standard equipment includes many features also available in other models of the range, either as an option or without extra charge, depending on the equipment version: LED headlights, Driver Alert System, Automatic Post-Collision Braking system, Front Assist including City Emergency Braking function, rain sensor and ParkPilot. On the other hand, as a high-tech flagship, the Passat GTE features several unique elements and equipment upgrades which distinguish it from the rest of the range.

In the upper section of the front end, the Passat GTE can be recognised by a specific chrome radiator grille unit with additional blue line. The front bumper was also redesigned, with distinctive cross panels in the lower air inlet and C-shaped LED daytime running lights. The "C"-shaped LED daytime running light and the blue line in the radiator grille unit are stylistic devices purposefully deployed by Design: blue is the Volkswagen "e-mobility colour" and in conjunction with the C-shaped daytime running light, it constitutes an identifying feature of all Volkswagen's electric and plug-in hybrid models. When viewed from the side, 17-inch "Astana" alloy wheels identify the Passat GTE as a plug-in hybrid.

The interior was likewise fine-tuned for the new drive system. With a menu matrix for the functions and displays related to the drive system, the engineers and interface designers at Volkswagen TE (Technical Development Centre) tailored features such as the standard "Composition Media" infotainment system and the instrument cluster (with power meter) for the plug-in hybrid drive. In addition, the innovative Active Info Display with specific displays will be also available as an option for the Passat GTE. Standard details such as the blue ambient lighting, leather-trimmed multifunction steering wheel with blue decorative stitching, GTE specific gear knob with blue stitching and seats covered in "Sevilla" cloth with a blue basic structure have also been especially configured to the Passat GTE. Furthermore, the interior was enhanced by the "Waves" design (aluminium look) and "Piano Black" (high-gloss black) as well as a GTE logo in front of the gear shift gate.

The owner of the new Passat GTE can make use of the "CAR-NET e-Remote" app, by which the charging of the battery, for instance, can be started via smartphone. Likewise, all climate control functions can be activated via the smartphone. In addition, information on the vehicle status, state of charge of the battery, recent driving data or last parking position can be queried. It is also possible to check whether the doors are closed and the lights turned off.

The new Passat GTE will be launched with the high resolution 6.5-inch display of the standard "Composition Media" infotainment system. Optional: the "Discover Media" (also with a 6.5-inch display) and "Discover Pro" (with an 8.0-inch display) radio-navigation systems. Both devices feature numerous additional functions in the Passat GTE. They include a "range monitor", an "energy flow indicator", "zero-emission statistics", "e-manager" and – when the optional navigation system is installed – the "360° range" feature.

On the left side of the instrument cluster the Passat GTE's power meter supplements the tachometer and shows information such as whether the high-voltage battery is being charged by regeneration or whether – and how much – energy is being consumed. The speedometer is still on the right side. A colour display, which is located between the power meter and speedometer, continually displays the electric driving range and the momentary operating mode. In a separate LED field in the lower segment of the multifunction display, the "READY" message also appears after starting the e-motor, indicating that the car is ready to be driven. This is done because the electric motor cannot be heard when the car is stopped. 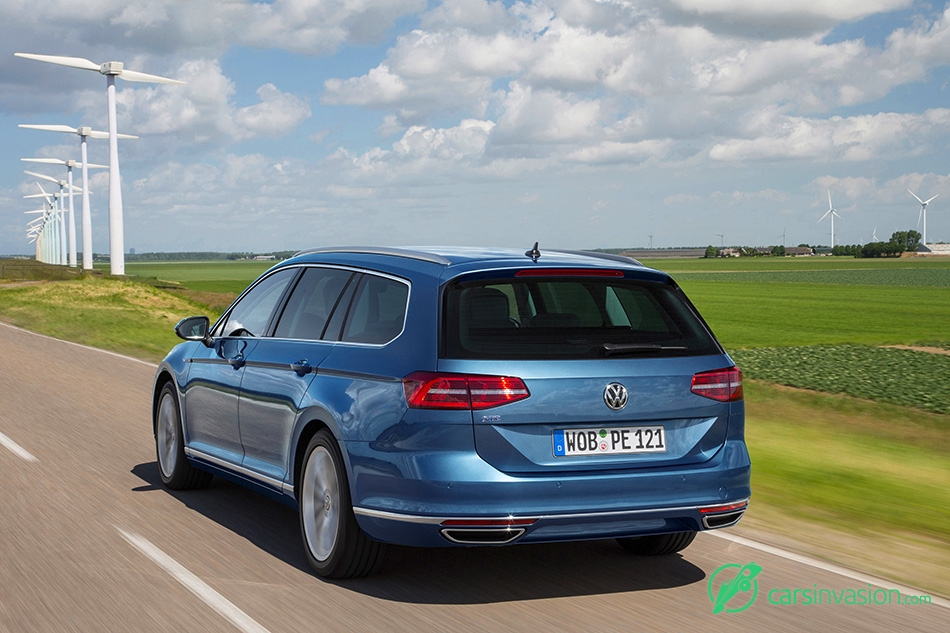 Volkswagen is offering an optional instrument cluster that has been designed as a full interactive display: the Active Info Display. All instruments – thus also the specific displays in the Passat GTE – are implemented virtually. Navigation information can be shown in 2-D or 3-D views on a 12.3-inch display. Its resolution of 1,440 x 540 pixels enables extremely precise, high-quality graphics and interactive display of all details. Take the Navigation mode, for instance: here the speedometer and tachometer are relocated to the sides to make more room for the map display. Information on driving, navigation and assistance functions can be integrated into the graphic areas of the speedometer and tachometer as needed.

Data that is displayed on the centre console via the infotainment system, such as phone contact pages or CD covers, can also be shown in the Active Info Display in the Passat. In fact, the driver can find all information relevant to driving in his or her direct field of view. As described above, he or she can pull up important data he needs according to the situation at hand and then use it in an individually selected display.

As outlined above, Volkswagen uses a turbocharged direct petrol injection engine (1.4 TSI) and a three-phase permanent magnet synchronous motor as electric motor to power the Passat GTE. Like a turbine, the e-motor revs up from a standstill and provides a maximum torque of 330 Nm. The electric motor is supplied by a 9.9 kWh lithium-ion high-voltage battery. The gearbox is an automatic six-speed DSG with three clutches (dual clutch plus disengagement clutch) that was specially developed for hybrid use. Whenever possible, the disengagement clutch disengages the TSI from the driven front axle and shuts it off – such as in phases of "coasting"; in this case, the Passat GTE makes use of the car's kinetic energy and coasts without any added propulsive power. Volkswagen integrated the electric motor into the gearbox housing. Additional components of the hybrid drive include the power electronics (converts DC power from the battery to AC power for the electric motor) and a charger. An electro-mechanical brake servo and an electric air conditioning compressor also ensure optimal and energy-efficient operation of the brakes and air conditioner in "E-Mode".

Operating modes – starting in the "E-Mode"

From "E-Mode" to "GTE". The Passat GTE can be driven in four different modes, and which one to choose is very intuitive. "EMode", "Hybrid", "Battery Charge" and "GTE". The driver can always see which mode is active on the multifunction display of the instrument cluster.

Starting in "E-Mode". Upon starting the car, the Passat GTE is automatically in "E-Mode" (except when the battery is not sufficiently charged or the outside temperature is very low, in which case the TSI takes over immediately). When a minimum charge level of the battery has been reached or when there is very high demand for power, the drive system automatically switches over to the "Hybrid" mode. In this state, "E-Mode" is deactivated, and the Passat GTE now behaves like a classic full hybrid vehicle that charges the battery regeneratively during deceleration and automatically uses the TSI and/or electric motor, depending on the situation. The charge state of the battery is maintained at a constant level in this mode. By pressing the "E-Mode" button (to the left of the gear lever), the driver can manually switch to "E-Mode." This button simultaneously opens a window in the infotainment system, in which the three "E-Mode", "Hybrid" and "Battery Charge" modes can be directly selected. 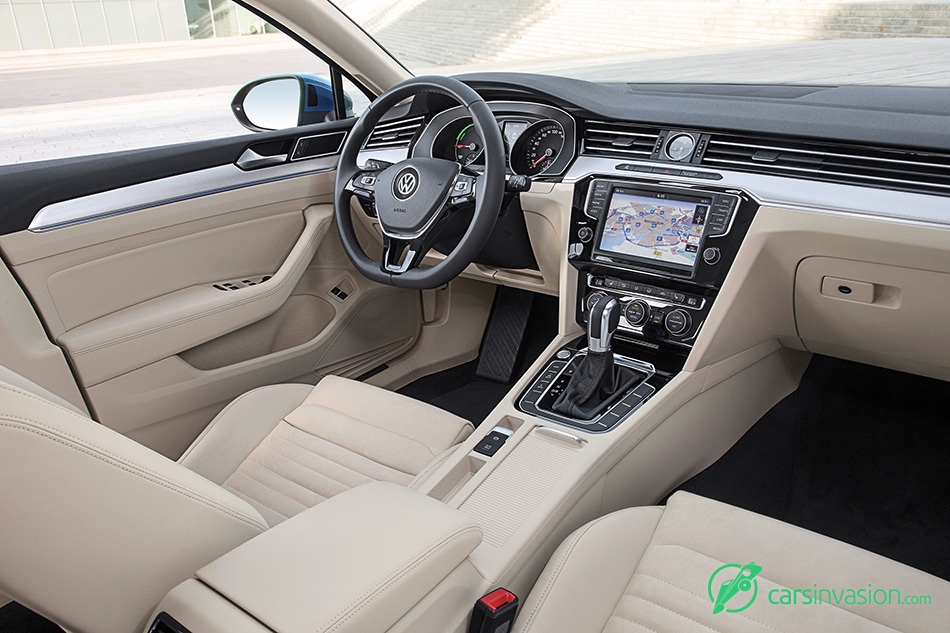 In addition to the "E-Mode" and "Hybrid" modes, you can set another mode via the infotainment system menu: "Battery Charge". In this mode, the high-voltage battery is charged during driving. By pressing the "GTE" button (also to the left of the gear lever), the driver can switch to "GTE" mode which activates the sporty nature of the Passat GTE. In this mode the characteristics of the accelerator pedal, gearbox and steering are made sportier. In connection with optional DCC, the chassis is firmer. The tuning of the TSI is also more performance oriented. In addition, in the "GTE" mode the TSI and electric motor work together, in what is known as "boosting", to make the full system power and the maximum system torque available.

There are two ways to charge the battery in the Passat GTE via the charging socket in the radiator grille. First: the standard charging cable is plugged into a 230 volt mains electrical socket. The battery is then charged by alternating current (AC) from the mains at a power level of 2.3 kW. From completely flat, it can be fully charged (100 per cent battery charge level) in four hours and 15 minutes. Second: Volkswagen offers an optional wall box for a garage or carport which charges at a power level of 3.6 kW. Using this method, the battery is fully charged after only two hours and 30 minutes. There are also public charging stations that charge electric cars at a level of 3.6 kW.