In 1974, precisely 40 years ago, the first generation VW Scirocco made its debut at the Geneva International Motor Show. The coupé has since enriched the lives of all those motorists who love dynamic performance in an agile, confidently stylish and affordable sports car. Volkswagen now presents for the first time - once more in Geneva - the latest generation of the icon which has sold more than one million units. It has been developed further technically and visually. For example, the engines: the six turbo direct injection engines belong to the latest generation of Volkswagen's four-cylinder engine family and consistently fulfil the EU 6 emissions standard; moreover they are up to 19 per cent more economical. Also as standard, all Scirocco with up to 162 kW / 220 PS have a Stop/Start system as well as a battery regeneration mode. The performance of the four TSIs (petrol engines) and two TDIs (diesel engines) ranges from 92 kW / 125 PS to 206 kW / 280 PS in Europe. Despite the reduced fuel consumption, all the engines demonstrate improved power. The largest leap is taken by the new Volkswagen Scirocco 2.0 TSI with 132 kW / 180 PS (previously 1.4 TSI with 118 kW / 160 PS) and the 280 PS Scirocco R (previously 195 kW / 265 PS). 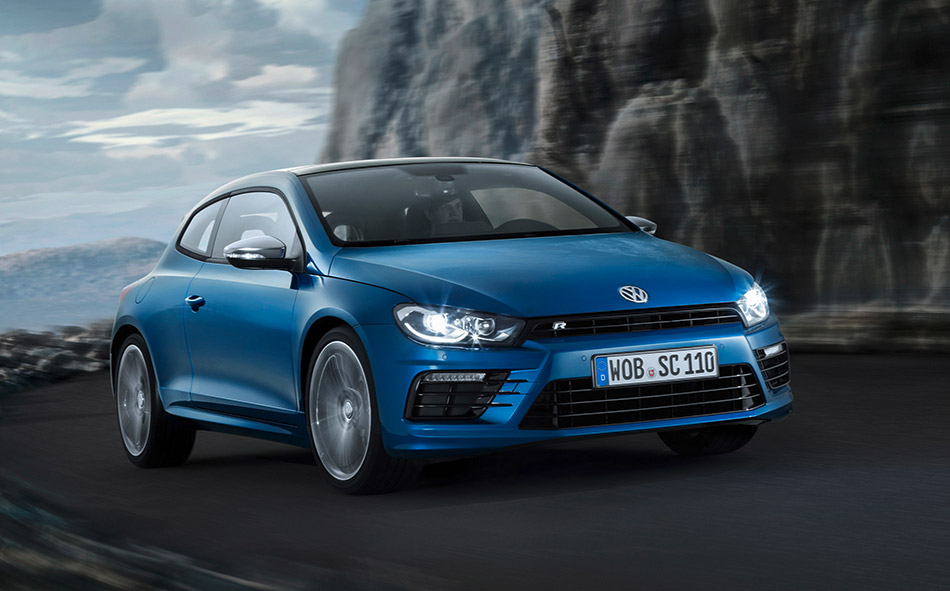 The external characteristics of the new Volkswagen Scirocco include its newly designed front and rear sections with redesigned H7 or bi-xenon headlights and LED rear lights. The rear and now swivelling VW logo was designed as a handle for opening the boot lid. The interior is equipped with sport seats and a leather sport steering wheel as standard, while the sports car also features new materials and colours. New technical features include the Dynaudio Excite sound system developed specifically for the Scirocco and the park steering assistant (ParkAssist). Also new on board as standard are auxiliary instruments (charge pressure, chronometer, engine oil temperature) which pay tribute to the original Scirocco.

Volkswagen Scirocco to be launched on the market in summer. Volkswagen produces the latest Scirocco at its Portuguese works close to Lisbon. The sports car will be launched initially in Europe from the middle of August. Shortly afterwards, the other high-volume markets such as China, Argentina, Turkey, Australia, Russia and South Korea will follow.

The design forms the visual basis for the overall sporty package of the Volkswagen Scirocco: with its unmistakable silhouette, the characteristic rear, the impressive front end and its appealing proportions the coupé also demonstrates visually that this car offers a high degree of agility and therefore provides driving fun. Like the first generation Scirocco, the third series of the sports car is also viewed as a stylistic icon. Reason enough to sharpen the design of the Scirocco carefully - although it can be recognised as "new" at an initial glance - in order to develop its character further.

Precisely drawn lines, a fully new light signature by the headlights as well as aerodynamic "blades" (narrow aerodynamic elements in the style of the Golf GTI) in the side of the bumper join together to form a new front section look. The new Volkswagen Scirocco also appears to be more clearly contoured and wider, due to the bumper surfaces painted in body colour as opposed to being kept black. The narrow "blades" and a black, open-topped frame in the bumper form a striking contrast for light paint. The large cooling air inlet in the lower area of the front section and the upper air inlet are kept black. Together with the XL1 and the Beetle, the Scirocco is also the only Volkswagen where the VW logo is on the bonnet. In order to protect the front section better against damages when parking, the ParkPilot is now also provided for the front bumper.

Striking light design is typical for all Volkswagen models. This illuminated fingerprint is particularly interesting for the new VW Scirocco when the new bi-xenon headlights are fitted: the engineers and designers have integrated a narrow, convex LED contour underneath the xenon module which looks like an eyelid and functions as daytime running lights. The indicators are placed separately in the outer regions of the bumper, with fog lights as well as the daytime running lights in the standard version. They are visually separated by the "blades". Together with the body-coloured trim for the lower cooling air inlet, the result accentuates the width of the car. The new design also makes the Scirocco appear to sit even lower on the road.

The brand's design DNA defines that the width of the vehicle in the front and rear areas is accentuated by using horizontal design features. The new Volkswagen Scirocco further reinforces this effect using completely newly designed LED rear lights and also a new boot lid. The trapezoidal contoured rear lights towards the centre of the vehicle with their C-shaped light contour now extend further into the boot lid which, in turn, is equipped with a horizontal light-refracting edge underneath the window. A new black diffuser matches this powerful and precise design, making the bumper appear to sit lower and the car as a whole flatter in its proportions. Practical: as stated above, the VW badge swings upwards when pressure is placed on the central axis in order to thus serve as a handle for opening the boot lid (which is protected against dirt). The number plate lighting also uses LED technology as standard.

New wheels and colours The newly designed 17-inch ("Shanghai") and 18-inch ("Lisbon" and "Salvador") alloy wheels attract attention. As standard, the Scirocco is equipped with 17-inch "Long Beach" alloy wheel rims and 205mm tyres (from 110 kW 225mm tyres). Optionally the coupé - and this is new too - can also be ordered with the legendary "Talladega" design 18 or 19 inch alloy wheel which was previously reserved for the Scirocco R. Moreover, five of the 13 available colours are new to the line-up: these are the three standard paints "Pure White", "Flash Red" and "Urano Grey" as well as the metallic colours "Ultra Violet" and "Pyramid Gold".

The exterior of the Scirocco R

Traditionally independent design and upholstery elements characterise the top model in the series: the Scirocco R. This is equally true for the design of the front and rear aprons in motor sport look and for the wheels. In particular the three large, glossy black air inlets, the standard bi-xenon headlights, the LED daytime running lights and the LED indicators attract attention at the front. At the side, this includes the door mirror housings in "matt chrome", the side sill extensions with "R" styling and the brake callipers painted black with "R" logo. At the rear, the chrome tailpipes (respectively on the left and right) and the larger roof edge spoiler still belong to the insignia of the "R"; whereas the large air outlets in the bumper must be mentioned as new in the rear section. The standard 18-inch wheel trim for the Volkswagen Scirocco R was also redesigned. It is named "Cadiz"; optionally this alloy wheel can also be ordered as a 19-inch version.

The new Scirocco has also been developed further in several areas inside. Thus, the optimised instrument panel trim on the passenger side which visually streamlines the dashboard with a striking horizontal edge is eye-catching. The air nozzle panels and the central panel around the navigation system with an aluminium-look are now flush-mounted in the instrument panel and thus accentuate the high-end quality of the interior. Like models such as the Golf GTI, the Scirocco is now also equipped with a new tubular-look instrument cluster; the instruments features new graphics and are smartly framed with an aluminium-look. The steering wheel design was also derived from the Golf GTI. Additionally, the three auxiliary instruments integrated above the centre console are included as a standard: charge pressure, chronometer and engine oil temperature. They serve as a tribute to the first Scirocco in which, dependent on the equipment version, two auxiliary instruments were installed lower down in the centre console. It goes without saying that the new Scirocco is also still equipped with standard features such as air conditioning, Hill Hold, electric windows and sport seats.

There is now a storage compartment close to the handbrake lever which can be closed using a "sliding blind". It is no coincidence that the new decor - "checkered black" - in the central panel forms an optical bridge to the world of the Golf GTI. Last but not least, the seats have been redesigned with new materials. New are "Matthew" (a tartan design with titanium black seat surfaces), as well as "Greg" Alcantara which is available in the hues "Ceramique", "Deep Mocca" and "Titanium Black"; as well as "Vienna" leather in the colour variants "Ceramique", "Sioux" and "black in carbon style". Also new: the light upholstery trim "Ceramique" for the lower section of the dashboard, door trim panels and the centre console which is offered in addition to "black".

The interior of the Scirocco R

Similar to the exterior, the interior of the VW Scirocco R is marked by the hand of Volkswagen R GmbH. The individualised features include the "Race" seat covers with the "R" logo and decorative stitching in crystal grey, the black roofliner, decorative "Carbon Race" inlays, applications in glossy "Piano Black" (radio faceplate, multifunction leather sport steering wheel and door handles) and stainless steel pedals. The specific "R" instrument needles are traditionally blue and the aluminium door sill plates are complemented by an "R" logo. 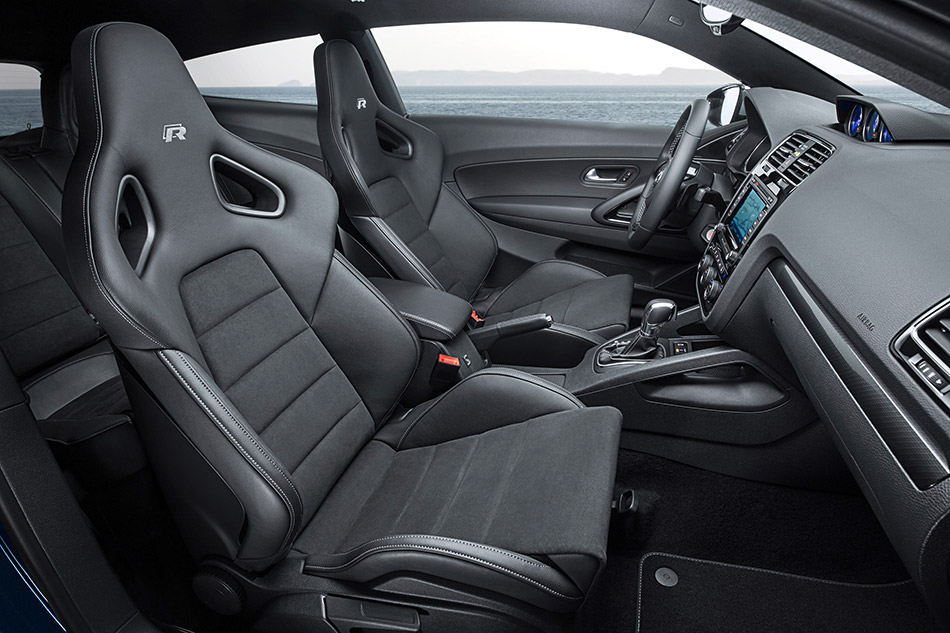 Up to 19 per cent more fuel efficient

The new Volkswagen Scirocco will be supplied with state-of-the-art technology for Volkswagen's four-cylinder engines. The perfected or new turbocharged direct injection engines all fulfil the stringent EU6 emissions standard; moreover they have been made up to 19 per cent more economical. Despite the reduced fuel consumption, all the engines demonstrate improved power. As standard, all new Scirocco up to a performance level of 162 kW / 220 PS also have a Stop/Start system as well as a battery regeneration mode. Except for the base engine (1.4 TSI, all Scirocco models can be combined with an optional dual-clutch gearbox (DSG).

A summary of the engines with their performance data, performance increases and consumption values (6-speed manual gearbox) is shown below: