Volkswagen is presenting the technically updated Sharan at the 2015 Geneva International Motor Show. Numerous new convenience and assistance systems make the family-friendly MPV one of the most advanced models in its segment. A wide range of infotainment systems also guarantees full connectivity to many smartphones and tablets. At the same time, the fuel economy of the petrol and diesel engines was improved by up to 15 per cent. The updated Sharan will arrive on the German market in the summer of 2015; advance sales begin in April 2015.

Along with the standard Automatic Post-Collision Braking System, which automatically initiates braking after a collision if the driver is no longer able to intervene, numerous optional assistance systems are available in the updated Sharan as well. They include the ambient traffic monitoring system Front Assist with integrated City Emergency Braking, the Lane Assist lane-keeping assistant, Adaptive Cruise Control (ACC), the third generation of Park Assist (for assisted parking and exiting from parking spaces) and the Blind Spot Monitor, which warns of vehicles in the blind spot when changing lanes. 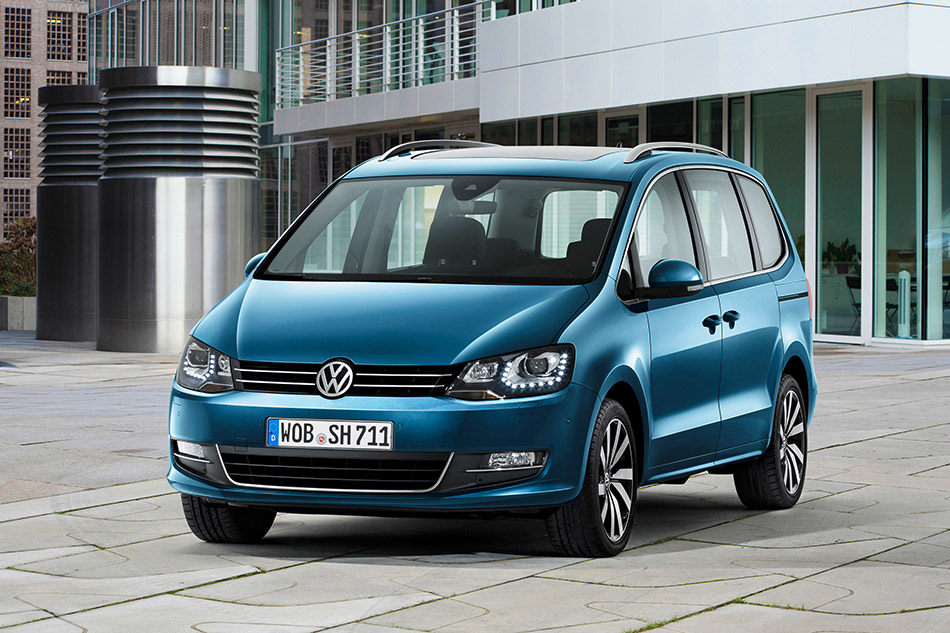 The petrol (TSI) and diesel (TDI) engines, which are as powerful as they are efficient, were completely redesigned. The turbocharged direct-injection engines are now up to 15 per cent more fuel-efficient, and they all conform to the Euro-6 emissions standard. The two TSI engines produce 110 kW / 150 PS and 162 kW / 220 PS. The power of the strongest petrol engine was increased by 15 kW / 20 PS. The diesel engines are offered at three power levels: 85 kW / 115 PS, 110 kW / 150 PS (gain of 10 PS) and 135 kW / 184 PS (gain of 7 PS). All engines (except the 85 kW TDI) may be combined with the agile 6-speed dual clutch gearbox (DSG), which now also enables the fuel-saving coasting function (decoupling of the engine from the drivetrain when foot is taken off the accelerator pedal).

The second generation of the modular infotainment platform is used in the Sharan; it offers a maximum level of connectivity. The Sharan is one of the first Volkswagen vehicles to be equipped with "App Connect"; thanks to MirrorLinkTM, Android Auto (Google) and Car Play (Apple), a wide variety of apps can be fed into the new infotainment systems. The systems are also impressive due to their fast processors (optimised boot-up, quick route calculation, optimal touchscreen performance) and high-resolution displays.

In addition, the Sharan interior was upgraded with new accents and materials, and the instrument cluster was perfected. The rear of the Sharan now also has a more concise light signature thanks to LED technology.