In February 1982 - 30 years ago - the new Volvo 760 GLE was launched. No typical Volvo, yet unmistakably a Volvo. Seen as elegant and exciting with its characteristic design it was well received. The 760 became the car that actually saved Volvo Car Corporation back then and paved the way to the modern company of today.

When the first plans for the new car were drawn up around 1975 the automotive industry in general was experiencing a lot of difficulties, and Volvo in particular. The first oil crisis had just passed and at Volvo, problems were rising regarding the build quality of the new Volvo 240. It was also a very difficult economic time for the company. It was expensive to build cars in the Torslanda plant, too expensive in fact, and it was no longer profitable to export them.

The 200-series was soon to be complemented with a new generation of smaller cars from the Dutch subsidiary Volvo Car BV, but at the same time a new large volume-seller for the 1980s was desperately needed. A car designed and built to meet the continuously higher demands for fuel efficiency, exhaust emission control and safety that kept appearing. It was just as difficult to foresee what kind of car the customers of the 1980s would want. 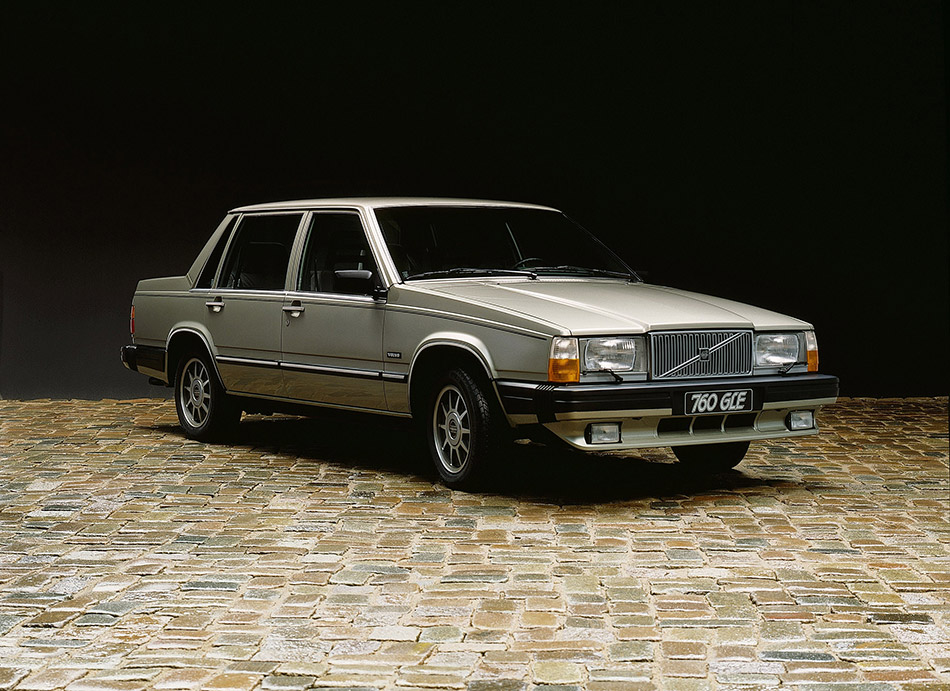 A new way to tackle the task

The 760 was conceived in a time when conditions changed almost daily and in the company there were many strong and different opinions regarding the new car. There was no Internet to surf in order to broaden the views but Volvo made use of the best possible tool available at the time, a very thorough analysis of the surrounding world. Careful studies and large mental flexibility would lead the team on to the right track and along that track there was very little or no room for mistakes.

It was decided that reliability, fuel efficiency, longevity, serviceability, low noise levels, design and performance in that order should guide the development work on the new project. It was also decided that rear-wheel drive should be employed, that the wheelbase should be 10 cm (4") longer than that of the 240. The car was also to be somewhat shorter than the 240 but have the same width and be 100 kg lighter.  For cost reasons most of the technical content was to be carried over from the 200-series with only minor modifications. This was, for instance the case with transmissions, suspensions and many other system solutions. The exterior design, however, had to be brand new.

The project, which was now known as the P31, was subject to changes. The technical specifications were only finalized at about the same time as the final design was frozen. Choosing the right design is just as difficult and important as filling the car with the right technical content.

The introduction was initially planned for 1980 but was at this stage postponed until 1981.

There were many design proposals to consider, many of them from outside designers. Most of them were sedans but Volvo's head of design, Jan Wilsgaard, was more into a hatchback. The finance department, on the other hand, wanted a design with straight and flat surfaces, with angular lines, preferably 90 degrees, in order to reduce the production costs as much as possible.

In the end, the battle stood between the favourite of the marketing department and the engineering department alternative, when the sometimes very secretive Wilsgaard pulled an unknown contestant out of his sleeve. It was his own proposal which blended the properties in a different way: A car with a drawn out rear end in the estate fashion with straight body sides and with an abruptly cut-off rear, in other words a cut-back. This cut-back remained in the final discussions but eventually a modified version of it - a sedan with an almost vertical rear screen and boxy rear section - was chosen. The straight sides lent the interior a spacious feeling which was also very comfortable. And above all, the car had real character.

It soon proved to be the right choice. In the midst of the round and slippery soap dishes offered by other manufacturers, the Volvo boxiness was a hit and soon turned into a hallmark. Very valuable during this selective process was the use of so-called product clinics which Volvo used for the first time and at which people's reactions regarding the new car were investigated without revealing any details like the brand of car etc. The reactions were not entirely positive, but in the USA, the planned main market for the new car, people loved it and looked upon it as their type of car.

Guiding large parts of the development work and affecting the project, besides the design, was new legislation and the engine programme. There were still drawing boards in the engineering department but computers were used in an increasingly larger scale with advanced calculation models, especially in the safety development work. By now, the project entered its final phase and at the beginning of 1978 it was humorously re-named 1155, i.e. five to twelve. It was time to hurry up.

A lot of things happened before the 70s turned into the 80s. In the spring of 1978, the first driveable prototype was ready and many more test vehicles were quickly finished. The time-consuming and thorough field test work started and the cars covered a total of 3.200.000 km on three continents, in the hottest and coldest climates available, in order to sort every thinkable detail.

In 1979, the AB Volvo car division was turned into its own company - Volvo Car Corporation - with Håkan Frisinger as its first CEO and in 1980 an interesting concept car was shown which hinted more than just a little bit about what was coming a year later. The Volvo Concept Car was an updated version of Wilsgaard's cut-back which was the real design inspiration of the 760. Although shorter at the back than the 760 was to be, it was almost identical.

The VCC is today on display in the Volvo Museum. The name, in its shortened version, also stood for the initials of the company, Volvo Car Corporation. In terms of technical content, the VCC featured the constant-track rear suspension of the forthcoming 760 and a powerful turbodiesel which showed the enormous future potential of the compression engine principle.

The plans for the 760 launch at the 1981 Frankfurt Motor Show had to be pushed forward again and when Volvo finally presented the car, in February 1982, an elegant car with a completely new and unconventional design was shown; pleasant to drive, comfortable and offered with three different choices of engine: a four-cylinder turbo, the V6 now bored out to 2.8 litres and the Volkswagen-built but Volvo specified in line-six D24 turbodiesel. When fitted with this engine, the 760 was the quickest diesel car off the mark in the world at the time.

In Sweden, the new 760 GLE was priced just below the psychological SEK 100,000 limit - at SEK 99,800 - and for that money the customer got a car that was very well equipped: a V6 engine with automatic transmission, air conditioning, a sunroof and power steering. No wonder the sales took off instantly, both on the home market and abroad. In true Volvo manner, sales started from the top down, with the 760 GLE followed later by the 740 series, in four and five door versions.

The Volvo 760 became a turning point for Volvo Car Corporation, product wise and financially, and formed the basis for the continuation of the company. Without the 760 no 850, without the 850 no S80 and so on. But it was an investment of gigantic proportions, SEK 3.5 billion. The whole idea behind it was that the 760 and all future derivatives were to keep up the sales during the rest of the 1980s and the beginning of the 1990s, which they did. It wasn't until 1998 that production ended with the V90, the last Volvo car with its roots in 760 technologies.