Volvo Car Group will use the Geneva Motor Show to reveal the third in a series of concept cars – the Concept Estate – that continues the widely-admired exterior design language revealed in the first two concepts, but for the first time reveals how the interior of Volvo's forthcoming models will both look and function.

The Volvo Concept Estate's most striking interior design feature is its simplicity. The traditional selection of buttons and controls have been replaced by one large tablet-like touch screen control panel in the centre console, bringing the interior firmly into the 21st century.

"The basic idea is to organise controls and information in a perfectly intuitive and user-friendly way. Everything is exactly where you expect it to be, making the drive more enjoyable, efficient and safe," says Thomas Ingenlath, Senior Vice President Design at Volvo Car Group.

In association with Volvo's specially designed software, the touch screen will be the main control panel for Volvo's new in-car user experience. It replaces all buttons and controls except for a few crucial functions such as volume, play/pause, hazard warning and window heaters. It also interacts seamlessly with the digital instrument cluster in front of the driver. 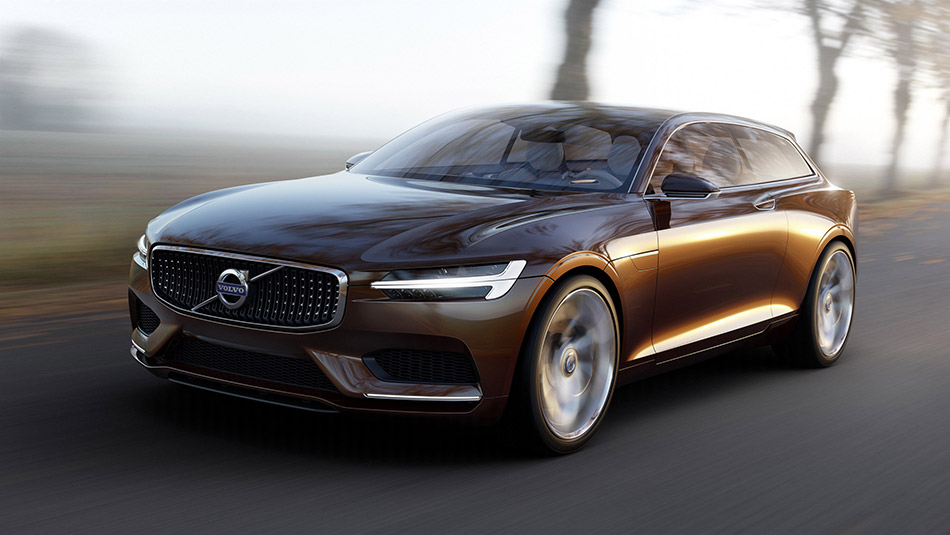 "Not having to deal with buttons and controls for a growing number of functionalities is like being freed from a pair of handcuffs," says Robin Page, Design Director Interior of Volvo Car Group. "This has made it possible to build a beautiful interior architecture around the portrait screen. The concept car showcases how this user interface will be integrated in our new car generation."

Volvo is the company that redefined the Estate car by combining functionality, sturdiness and practicality with performance. The V70 and XC70 are among the most respected Estates on the market and the new Concept Estate points to how the company could capitalise on this heritage in its forthcoming models.

Volvo has been on a winning streak with its concept cars. The Concept Coupé was named ‘Car of the Show' by a leading German auto magazine at the Frankfurt Motor Show, while the Concept XC Coupé received the prestigious ‘Eyes ON Design' award at the Detroit Motor Show.

Global attention on Volvo's concept cars has been intensifying as they provide the first significant clues as to how the all-new and much-anticipated XC90 SUV and subsequent cars will look. The XC90 is due to be launched later this year.

The rear of Concept Estate echoes the design of the Volvo 1800 ES from the early 1970s.

"The 1800-models are iconic Volvos, renowned for their beautiful forms and detailing. However, using elements from their exterior and interior has nothing to do with being retro. We are using these subtle links to a glorious past to create a future in which sheer beauty becomes a recognised part of Volvo's identity," says Thomas Ingenlath.

The subtle inspiration from the 1800-models is also evident on several details inside the Concept Estate, such as the two-spoke steering wheel, the instrument panel and the dials.

Robin Page explains: "The first four decades of the Volvo history was characterised by classic craftsmanship and high quality materials. We are merging this vital part of our brand DNA with the more recent focus on technology and smart functionality. In the Concept Estate we also add the creative side of Scandinavia. The result is an exotic interior with genuine materials and beautiful detailing."

Applying this approach to the iconic estate car – which is the essence of versatile Volvo functionality – creates a car that is both beautiful and different.

The generous dash to axle ratio, low bonnet, sleek silhouette and the glass roof all contribute to the impression of a dynamic, yet capable three-door sports wagon. The contrast between the deep, dark brown pear colour and the bright five-spoke, 21-inch wheels contributes to the modern, cool aura.

Just like the recent Concept Coupé and the Concept XC Coupé, the face of the Volvo Concept Estate is characterised by a new topography on the bonnet and the ‘floating' grille, flanked by headlights featuring new T-shaped DRL light guides. The rear light signature is another distinctive element in Volvo Cars' new design direction.

Swedish inside and out

Extrovert and colourful trends within contemporary Swedish lifestyle and design have been powerful sources of inspiration for the design team. Occupants in all four seats are embraced by orange seat belts, and the exclusive, woven wool carpets from the Swedish designer Kasthall have the same deep accent colour.

The crystal gear leaver from Orrefors/Kosta Boda also has an orange glow, while the chequered black and white wool textile on the headliner and rear sides of the front seats adds playfulness to the ‘room'.

"Creativity is thriving in Swedish society. This includes design and technology as well as the fashion, music and art scene. We have used all this as inspiration to create a new, exciting way to express Sweden's soul," says Thomas Ingenlath.

The feel of a Scandinavian living room

"The interior is exceptionally vivid. Yet the glass roof and seats covered by light, soft Bridge of Wear leather help to retain that bright and cosy feeling that is the hallmark of a Swedish living room. A place that makes you feel so comfortable that you are reluctant to leave," says Robin Page.

The ambiance might inspire occupants to stop for a picnic and game of Swedish "kubb". The specially designed game set is visible through the load floor in the back.

"Don't know the rules? No problem. They are printed on the transparent floor. And rain is no excuse. You will find exclusive Stutterheim raincoats in the back of the car as well," explains Robin Page.