With the Abt TT-R Abt Sportsline celebrated the most amazing motor sport victories in the season 2002. Hardly anyone was able to beat the Abt TT-R. In nine of the ten DTM races at least one of the Abt pilots clinched a podium position, and at the end Laurent Aiello won the DTM championship in the yellow Abt TT-R. Therefore it is no wonder that the Abt team from Kempten has a special relationship with "their" TT and it is a fortunate coincidence that the second version of this sporty Audi model just appears on the market when the family enterprise celebrates its 110th company anniversary. At the same time, this happenstance means a challenge for Abt Sportsline - a challenge the team from Kempten meets by enhancing this exceptional sports car.

The new Audi TT is a model which already combines clarity and form with modern technology in the serial car and therefore offers maximum driving pleasure. "This is the best precondition we can imagine to perfect a car," explains Hans-Jürgen Abt, managing director of Abt Sportsline - and presents convincing data:

The masterpiece in the new Abt TT model range is the Abt TT-R equipped with a VR6 3.2 ltr. engine and a performance of 355 HP (262 kW). Article originally posted on Babez.de! This outstanding sports car offers real racing adventure for the roads. The Abt TT-R accelerates from standstill to 100 km/h in 5.1 seconds compared to the serial model that takes 5.9 seconds. 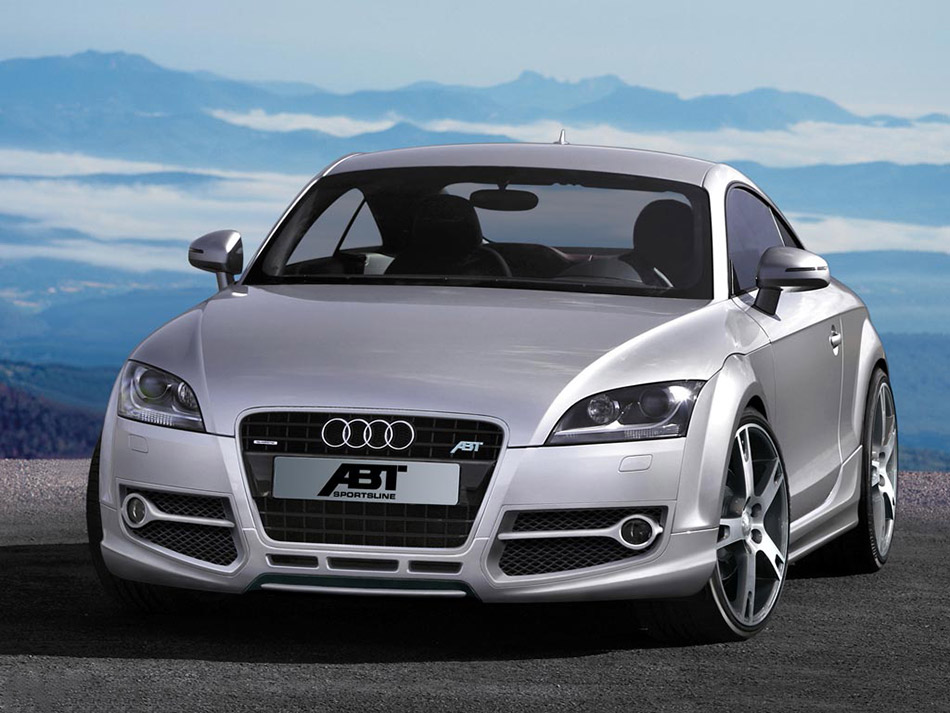 For the new 2-litre TT Abt also offers its innovative intelligentSport-technology. Specific modifications of the motor management allow the Abt TT-iS to be fuelled with standard, super or superplus gasoline. The performance increases to as much as 240 HP (177 kW) depending on the fuel quality. More power – less thirst. With an additional Abt gearbox modification the fuel consumption of the Abt TT-iS can be reduced by up to four litres.

Besides the power boost, the modified design of the Abt TT models was one of the most important factors. In this connection Abt Sportsline has developed special body styling parts that make the TT a real eye-catcher communicating power and dynamics. With an integrated grille element, the front skirt emphasizes the area around the fog lights and single-frame grille so that the face of the Abt TT becomes even more aggressive and marked. The lateral body styling parts continue the dynamical body language and lead directly to the extravagant rear with rear skirt inset and rear wing. In contrast to the filigree serial part the Abt rear wing cannot be folded but is a part that is firmly integrated into hatchback. The result is not only a racier design; it also brings about more downforce. The 4-pipe rear muffler is the finishing touch that perfectly harmonizes with the black rear skirt inset and rear diffuser. To round off the striking overall optical design, Abt Sportsline recommends the 19-inch wheels AR19 and SP1 with tyres sized 255/35 ZR 19.

What is more, Abt has also included a special suspension kit and suspension springs in its product range so as to meet the demands of the power upgrade and modified design. Article originally posted on Babez.de! The new Abt TT with its extraordinary driving performance and body styling has everything a winner needs.