The Audi TT's original shape with its curved roof is a real design classic. More pronounced and geared to the zeitgeist, a brand new edition will now be seen in showrooms. At the German Essen Motor Show 2014, ABT Sportsline will feature its interpretation of this racy Audi coupé, a world premiere. "The purist body gives us a lot of leeway for differentiation", says CEO Hans-Jürgen Abt. At its booth at the Essen Motor Show, the globally largest tuner of cars produced by the Volkswagen and Audi Group will therefore present a comprehensive body kit for this new edition, which is in line with a number of TT conversions by ABT Sportsline for both public roads and race tracks, including the DTM touring car winner ABT TT-R from 2002, driven by Laurent Aiello. No less spectacular were the derived road versions TT Limited, TT Limited Widebody and Limited II, which, given their small number, show real collector's potential. And of course ABT also has two attractive performance and styling packages for the 2nd TT generation. 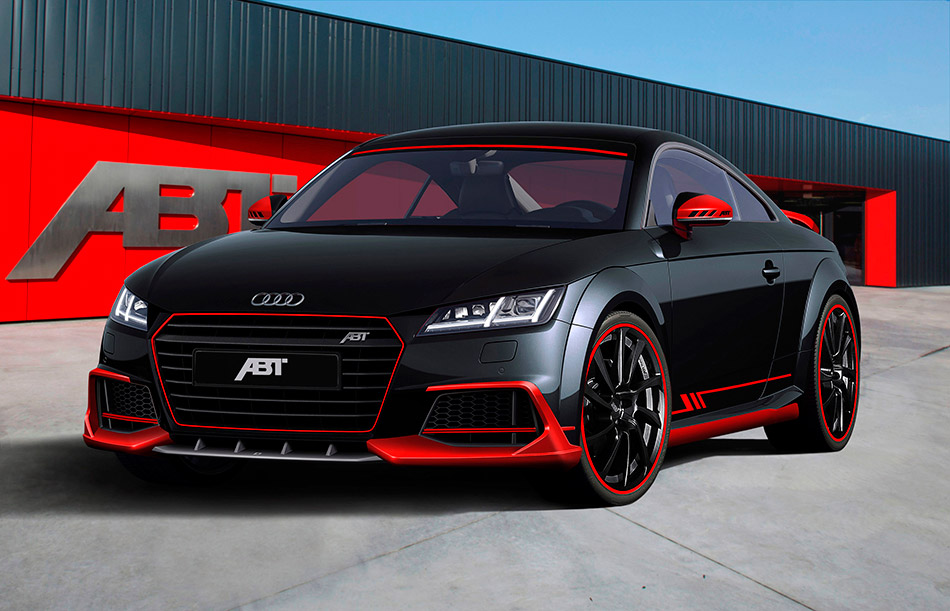 With a particularly masculine front skirt add on, ABT Sportsline lends the much more edgy face of the "TT III" now an even more pronounced look. Specially designed mirror caps and black 20'' DR alloy wheels with sporty Continental tires adorn the side of the car to be shown. Of course, there are alternative designs, finishes and sizes as well. The highlight of the set is the ABT Sportsline-refined rear. While the serial version with its retractable spoiler and round back is rather elegant, the Bavarians use a fixed wing, which makes the car appear more aggressive and racy. A rear skirt insert with two additional side attachments that underscore the sport coupé's width and a striking four-pipe rear muffler complete this impression.

The car to be shown in Essen uses an ABT Power uprating based upon the 2.0 TFSI to turn 230 hp/169 kW into 310 hp/228 kW and 440 Newton metres of torque (serial: 370 Nm). In combination with the new TT's compact dimensions and low weight, this car's performance may not be experienced live at the booth but can certainly be guessed at. "Looks fast and is fast, too," Hans-Jürgen Abt summarises the philosophy behind the car.