Featuring original patrol car markings, blue lights, a hefty 530 hp (390 kW) and 690 Nm of torque: This year's campaign vehicle for TUNE IT! SAFE! will be ceremonially unveiled at the Essen Motor Show and is the dream of every police officer. But despite its hot pursuit potential, this Avant will not be chasing criminals. Like its predecessor, this eye-catcher is the poster-boy for the safe tuning initiative from Germany. 2019 is the first year an estate has been used – and it is brimming with power: The vehicle was tuned by Kempten's ABT Sportsline. 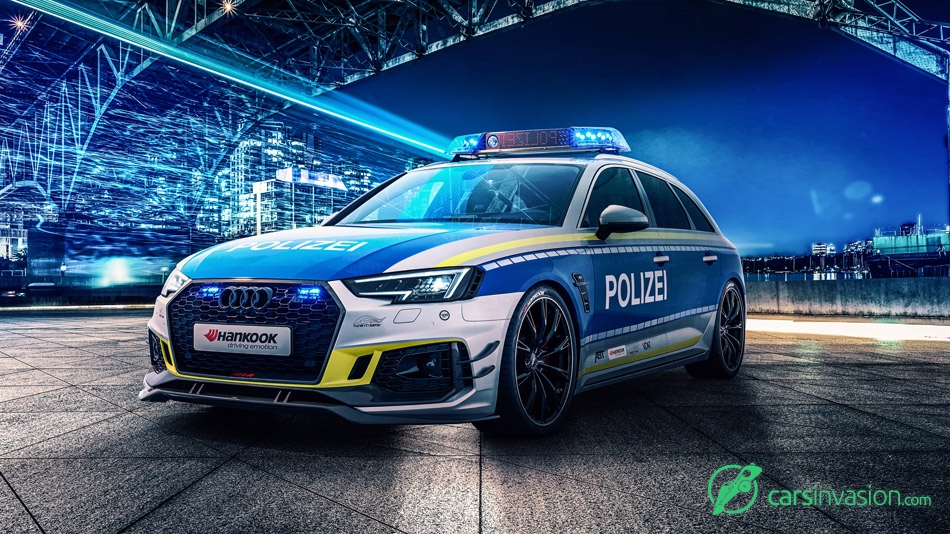 For its core, the world's largest Audi and VW tuner chose the Audi RS4 Avant, with a standard performance of 450 hp (331 kW). The company installed an ABT Power S performance upgrade, including additional water cooler and air intake, thereby giving the powerful RS4 an extra 80 hp and transforming it into a truly advantageous Avant. What's more, it also features an ABT exhaust system with four 102 mm carbon end pipes. And the rest is more than impressive. The ABT RS4-R in original police design makes its global debut on 29 November 2019, the Essen Motor Show Preview Day. Afterward, until 8 December, it will be on show at the legendary PS Festival on Stand C26, Hall 7. There, it will be the new eye-catcher for the TUNE IT! SAFE! an initiative by the German Federal Ministry of Transport, the German Association of Automobile Tuners (VDAT), the premium tire manufacturer Hankook and many other partners.  Hella was responsible for the Power Avant's signaling equipment and the original markings were recreated in exact detail by FOLIATEC.com.

Whether for wheels and tires, suspension, bodywork, engine, exhaust system or interiors, TUNE IT! SAFE! proves once more that automotive tuning provides many options, whilst maintaining traffic safety and regulatory compliance. In the new campaign year, the safe tuning initiative shows how you can make a statement, even in a sports estate.