The basis for the latest concept vehicle, which remains a one-off and carries the name AC Schnitzer ACZ4 5.0d, is the BMW Z4 sDrive 23i (E89), but it's been modified from the bottom up.

The rear axle gear and limited slip differential from the BMW M3 (E92) replace the standard rear differential, and the standard manual gearbox has been replaced with an 8-speed automatic with pedal sports shift. 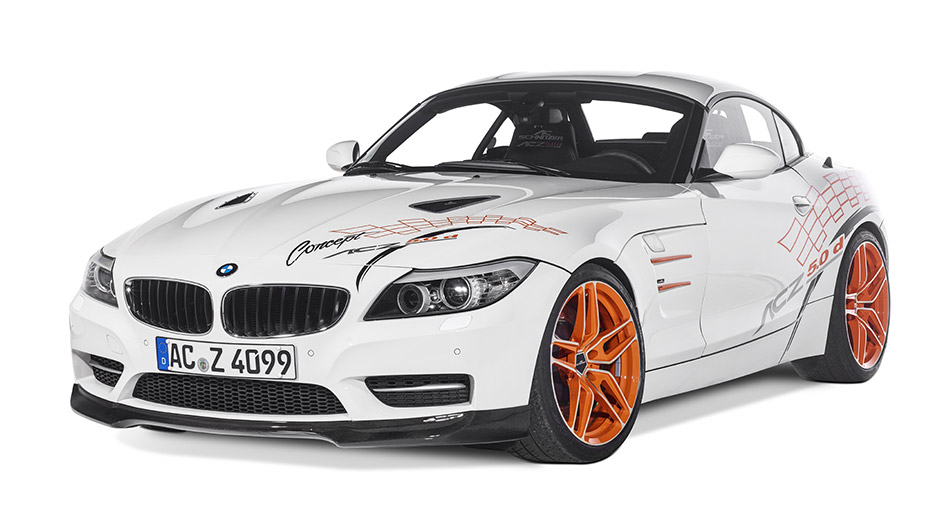 Equipped in this way, the AC Schnitzer ACZ4 5.0d sprints from 0 to 100 km/h in an incredible 4.5 seconds, only reaches its top speed beyond the 300 km/h mark, and at 1:37.22 min - according to the test in "Auto Bild sportscars" - is the fastest diesel on the Sachsenring.

New engine styling and a modified instrument console are also part of the extensive modifications.

The increased engine power alone however would not have pushed the power curve of the ACZ4 5.0d up quite so far. The other part of the equation is the systematically applied lightweight construction - some examples: the electrohydraulic metal folding roof and the boot lid have been replaced by CFC constructions. These optimisations alone account for a 90 kg weight reduction.

The standard silencer has been replaced by a lightweight silencer, so now the exhaust doesn't add 23 kg ballast, but just 4 kg.

A further 25 kg are saved in the wheelset - based on the AC Schnitzer forged alloys Type VIII -  which combines rims in 9.5J x 19 inch with tyres size 265/30 R 19.
As a whole, with a few further measures, 131 kg has been "trimmed off" so that despite the significantly heavier M50d power plant, the car weighs in at just 1469 kg.

The suspension dynamics of the ACZ4 5.0d have also been optimized using the power-to-weight formula. The racing suspension, fully adjustable in both compression and rebound stages while also lowering the Z4 bodywork at the same time, is combined with the lightweight high performance braking system on the front axle to ensure excellent and stable deceleration.

The interior too of the AC Schnitzer ACZ4 5.0d leaves no doubt that this is a very special car: interior trim elements in orange, and carbon racing bucket seats offering strong lateral support, with the embroidered ACZ4 5.0d logo, were all specially made. Aluminium pedals and foot rests, and velours floor mats complete the range.

The AC Schnitzer ACZ4 5.0d is a concept vehicle not for sale, which was produced to customer specifications and at the same time acted as a technology platform for AC Schnitzer product development. In its current form, the vehicle would cost € 113,965.00.

The conversions in the brakes, suspension, body, interior and wheelset are part of the AC Schnitzer retail range for the Z4 model series. All are homologated and available via BMW dealers.