Acura today held the world debut of the Acura RLX Concept at the New York International Auto Show, providing luxury buyers with a first look at the design and engineering direction for its all-new Acura RLX flagship sedan, slated for launch at the beginning of 2013.

The RLX Concept employs an extraordinary array of new Acura technologies, including the Sport Hybrid SH-AWD® system, in combination with sophisticated styling and smart packaging to deliver an entirely new level of performance, sophistication and comfort.

"We have created a true luxury sedan based on our Acura DNA," said American Honda president & CEO, Tetsuo Iwamura. "This means achieving advanced performance through engineering efficiency to create a unique synergy between the vehicle and its driver. Inside and out, on the open road or city streets, the sophisticated and elegant Acura RLX will offer a level of connectivity, comfort and advanced performance demanded by today's luxury buyers."
Acura also announced that the production RLX will be offered in a 310-horsepower, front-wheel-drive version, which will also deliver superior handling performance through the application of another new Acura technology- Precision All Wheel Steer™. 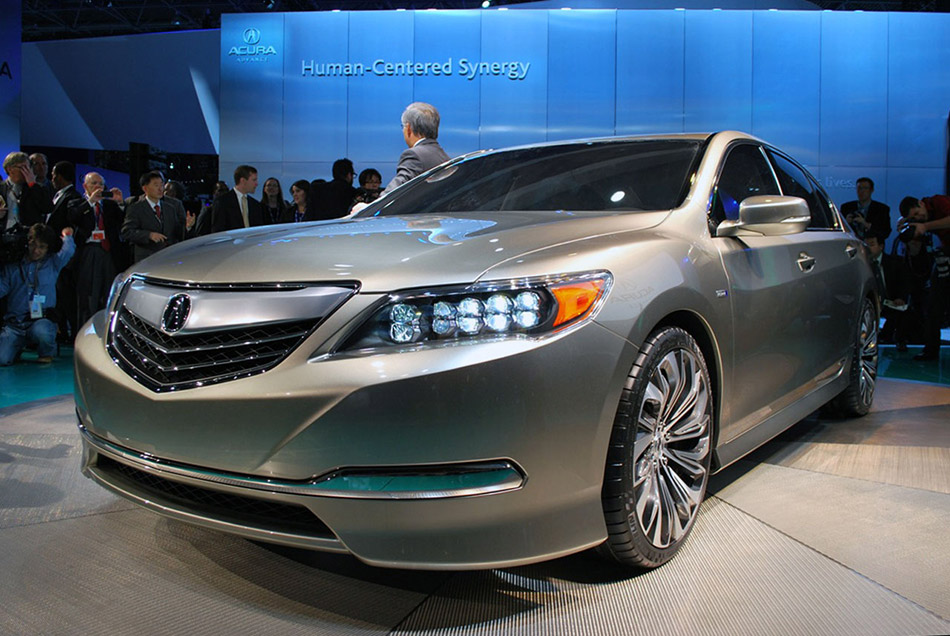 Styling-Design
The RLX Concept styling builds on Acura's 'Keen Edge' design motif with its taut and aerodynamic shape, carefully tailored proportions, and sophisticated and distinctive detailing. Its athletic stance is accented by 20-inch forged aluminum wheels and 255/35 R20 high-performance tires. Dimensionally, the RLX Concept is approximately the same length as the current RL, but with a two-inch longer wheelbase and two-inch shorter front overhang. Both the track and vehicle width increase by approximately two inches.

Acura's exclusive new Jewel Eye™ LED headlamps debut on the RLX Concept. The Acura signature Jewel Eye™ headlamps use a dual-stacked array with a total of eight separate high-intensity LED lamps, with ultra-reflective optical lenses and high-gloss trim, to provide powerful down-the-road illumination while simultaneously giving the RLX a highly distinctive and bright-eyed look in both daytime and nighttime conditions.

Body and Chassis
Through engineering efficiency, including substantial use of high-strength steel and aluminum, the RLX Concept achieves an ultra-rigid and light body design, with the front wheel drive version to weigh in at well under 4,000 pounds. An all-new double wishbone front suspension, multi-link rear suspension, Amplitude Reactive Dampers and electronic power steering with a variable gear ratio team to provide the foundation for the RLX's precise and intuitive handling control - termed by Acura as "Inomama" or "at the will of the driver."

Safety
The Acura RLX will offer an extensive array of passive and active safety features. These include a Collision Mitigation Braking System™ and the first application of Acura's Lane Keep Assist System. In addition, Forward Collision Warning and Lane Departure Warning will be offered as standard equipment on the RLX.

Passive safety features will include front, side and side-curtain airbags for the driver and front passenger, and a driver's knee airbag. The RLX also incorporates the second generation of Acura's Advanced Compatibility Engineering™ (ACE™) body structure, with reinforced front frame members for further enhanced frontal crash energy management. The RLX is expected to achieve a 5-Star Overall Vehicle Score from NHTSA and TOP SAFETY PICK status from IIHS.

The RLX also will be available with Acura Navigation System with Voice Recognition™. This innovative system offers the driver a wide range of search options including Bing™ search functionality and the option for an AcuraLink® concierge to send a destination to the vehicle's navigation system. In addition, the RLX navigation system will feature AcuraLink Real-Time Traffic™ for both highways and surface streets.