Launch of the most exclusive model version in Audi's new A8 car line – the A8 L Security. The high-security version of the luxury sedan meets the highest level of criteria that apply to civilian vehicles. An array of high-security equipment features complement the armor plating. The new Audi A8 L Security is available with two outstanding engines, the 4.0 TFSI and the W12.

Body
At 5.27 meters (17.29 ft) long and with a 3.12 meter (10.24 ft) wheelbase, the new Audi A8 L Security is a representative sedan that is, visually, barely distinguishable from the production version. And like its mainstream counterpart, its sporty, elegant design is now even more expressive: The hood, the Singleframe grille and the bumper have acquired sharper contours. The headlights have been made flatter and the LED rear lights have been modified too. The exhaust system is terminated by two large trapezoidal tailpipe trims on both sides of the tail end.

LED headlights are part of the standard specification in conjunction with the V8 engine; the W12 comes with Audi's innovative Matrix LED technology. With these headlights, the high-beam comprises 25 small, individual light-emitting diodes per unit that can be switched on and off or dimmed individually as needed. The headlight system can very precisely mask other road users out of the cone of light, without significantly reducing illumination of the road.

When developing the A8 car line, Audi included the high-security version in its plans right from the outset, resulting in an integral overall concept that is far superior to retrofit solutions. The deformation properties of all key components were investigated to ensure the new A8 L Security exhibits excellent crash behavior which also seeks to minimize the impact on the other party. Complete with its quattro permanent all-wheel drive, it is still the lightest luxury sedan in the high-security segment.

Its basis is a modified production body made largely from aluminum according to the Audi Space Frame (ASF) principle at the Neckarsulm plant, the home of the A8; as a result, it weighs roughly 40 percent less than an equivalent body made from steel. The components that are specific to this version are made by hand in a secure production zone. It takes specially trained workers about 450 hours to fit them, before the body is sent back to the plant for final assembly. 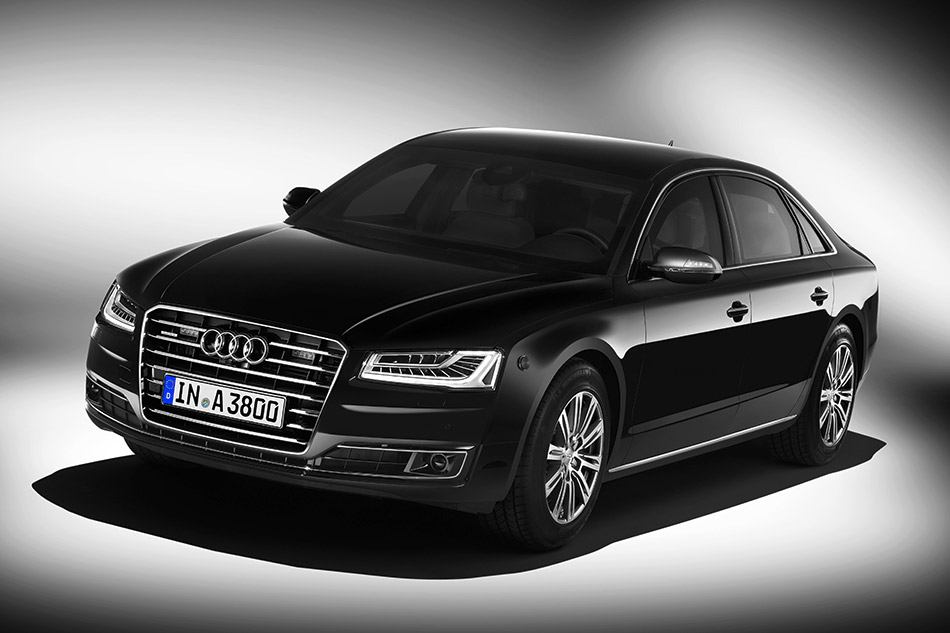 The new Audi A8 L Security has been officially certified by the German Ballistics Testing Center in Munich; it complies with the requirements of the class VR 7 ballistic protection standard in accordance with the BRV 2009 guideline. BRV stands for "Bullet Resistant Vehicles". Class VR 7 imposes the strictest criteria on civilian high-security sedans: The body panels and glazing of the passenger cell must withstand firing with NATO sub-caliber ammunition. In certain areas, the armor plating on the A8 L Security even complies with the criteria for the classes VR 9 and VR 10. Resistance to explosives is tested in accordance with the ERV 2010 guideline (Explosion Resistant Vehicles).

The aluminum side sills incorporate massive ballistic-proof profiles that afford increased protection against explosive weapons – an area in which the requirements have become considerably tougher in recent years. The armor-plated vehicle floor made from a special aluminum alloy has the same purpose. The new Audi A8 L Security can withstand attack by military hand grenades. Even an explosive charge, as specified in the test program, does not pose a lethal threat to passengers, as demonstrated by tests involving dummies.

For the door windows, windshield and rear window, Audi uses special glass with a splinter-inhibiting polycarbonate layer on the inside. As an option, there are electromechanical side windows that almost fully open the panes. A doorstop function holds the door in any desired position.

The communications box in the trunk of the high-security saloon is one of its central elements. It houses the control units for the vehicle and communications electronics, as well as a supplementary battery and elements of the optional components that increase passenger protection still further. The highly armor-plated communications box has comparatively lightweight ceramic doors, and its frame is made from aluminum. Special protection for the battery and fuel tank can also be supplied as an option.

The standard equipment of the new Audi A8 L Security also includes the intercom system that the passengers can use to communicate with the outside world with the windows shut. It comprises a loudspeaker in the Singleframe grille, along with microphones for the interior and for the vehicle's surroundings.

Optional high-security equipment
Audi can supply a wide range of options to enhance protection in the new A8 L Security. These include the emergency exit system, a technology for which the brand holds the patent. If the driver or rear passenger presses a sealed switch while pulling one of the inside door handles, pyrotechnic fracture bolts in the hinges detach the door from the body so that it can then be opened with a light push.

Another feature is the fire extinguisher system, which is activated at the press of a button or by heat sensor. The extinguishing agent is supplied through pipes on the underbody from two tanks fitted in the trunk. Nozzles spray it into the wheel arches, onto the underbody and tank, and into the engine compartment.

The emergency fresh-air system operates with two pressurized cartridges housed in the protected zone. At the push of a button it supplies the interior with breathing-quality air through vents – in most cases for long enough to drive through or out of a hazard zone. The system generates overpressure inside the vehicle and thus prevents infiltration by toxic gases. Another option is the security start – a feature that allows the driver to start the engine remotely by radio signal.

Numerous additional solutions round out the offering. These include selective unlocking of doors, a smoke extractor for the interior, an LED signal system for convoy driving, pennant holder, flashing lights, a siren, a preparation for or installation of analog and digital radio networks for security authorities and organizations, a built-in phone, an accident data recorder, an additional rear camera and a heated windshield including partly heated side windows. Audi is also able to meet special requests of customers.

Interior
The interior of the new Audi A8 L Security is an elegantly styled relaxation zone offering a bespoke-standard build quality. There are two electrically adjustable individual seats in the rear. The front comfort seats, with an equally wide range of adjustment options, can also be supplied with massage and ventilation functions.

On request Audi will fit the relaxation seat – an extensively adjustable front-passenger seat with electric-control footrest, ventilation and massage function. A continuous center console with large storage compartments is also available, rounded off by the Rear Seat Entertainment with two 10.2-inch displays. Optional features such as a folding table, a cool box and auxiliary heating make for an even more pleasant trip.

The range of upholstery materials, inlays and colors available for the interior has been revised. The highlights include the new Unicum leather, which is especially natural and breathable. The range of inlays offered by Audi includes poplar brown silver and fine grain ash natural gold brown; these have a finish enhanced with silver and bronze pigments respectively. Especially discerning customers will find many other individual features in the Audi exclusive range.

For all its array of functions, the new Audi A8 L Security has a clear, easily understandable operating concept. One of its central elements is the MMI terminal on the console of the center tunnel. The driver can control a wide range of navigation and multimedia functions by character input using the large rotary pushbutton and a touchpad – the MMI touch.

The high-tech character of the V8 biturbo is manifested in numerous details, such as the twin-scroll turbo chargers that provide for the early and rapid development of torque, in the innovative thermal management and in the layout of the cylinder heads. Their intake end is on the outside and the exhaust end on the inside. The turbos and their intercooler are located in the inner V. This layout results in short gas flow paths with minimal flow losses and spontaneous response.

The W12 engine, with a displacement of 6,299 cc, is notable for its extremely compact layout. Its crankcase consists of four rows of three cylinders. Two rows face each other, offset by 15 degrees, and combine to form a single, wide bank. The two cylinder banks are arranged at an angle of 72 degrees. The crankshaft has a crankpin offset of 12 degrees so that the twelve cylinders ignite in the ideal interval of 60 degrees.

On both engines, an eight-speed tiptronic with a high overall spread takes charge of the transmission. Its fully electronic control is operated from a selector lever or by paddles on the steering wheel. The quattro permanent all-wheel drive system distributes the power to all four wheels. The basic setup is sporty, with a bias towards the rear wheels; if need be, the system transmits most of the power to the axle with the better traction.

Chassis
The new Audi A8 L Security provides luxuriously smooth ride comfort. Its chassis, brakes and electronic control systems have been specially developed to handle the increased weight; the strength, materials and wall thicknesses of the control arms, for example, have been redefined. The adaptive air suspension complete with controlled damping is incorporated into the driving dynamics system Audi drive select, with which the driver can vary the way a whole range of technical modules operate. As an alternative to hydraulic rack-and-pinion steering there is dynamic steering, where the ratio is adapted to the road speed.

The high-security sedan comes with forged 19-inch wheels as standard. The tires have the unconventional dimension 255/70 and the high load index 117. Polymer rings on the rims enable the vehicle to continue traveling at a maximum speed of 80 km/h (49.71 mph) even after a puncture. A direct-measurement tire pressure monitoring system is likewise standard, and Audi can supply a full-specification spare wheel as an option.

Equipment and trim
The interior of the new Audi A8 L Security presents a First Class atmosphere – as well as the luxurious seats, standard equipment items include four-zone automatic air conditioning with an ionizer, electric rear blinds, the Bose surround sound system and a TV tuner. The MMI navigation plus interprets the route in advance and transmits the data to the control units for the tiptronic, the headlights and the optional adaptive cruise control with stop & go function. Another standard feature is the parking system plus with surround view camera.

The Audi pre sense safety system can reduce the severity of accidents and their consequences in many cases. The new A8 L Security comes with the pre sense basic version as standard, complemented by the pre sense rear function, which is linked to the Audi side assist lane-change assistant. Safety and comfort can be enhanced by other systems if desired: Audi pre sense front as a component of adaptive cruise control (ACC) stop & go, night vision assistant, and Audi lane assist, which identifies lane markings.

The new Audi A8 L Security also leads the way in terms of multimedia – the standard-fit hardware component Audi connect including car phone provides Internet connectivity. The system delivers tailored online services into the car for the driver's benefit, and the passengers can connect their mobile devices to a Wi-Fi hotspot. Separate phone receivers are available as an option.

Orders can already be placed for the new Audi A8 L Security W12, with deliveries starting in the third quarter of 2014. Audi provides extensive services to support its customers and offers special training for drivers and vehicle owners.