Unadulterated luxury is delivered with even more élan and even greater efficiency in the new generation Audi A8, which makes its debut at next month's Frankfurt Motor Show. The latest flagship combines revisions to its weight-optimised, predominantly aluminium body with a raft of technological advances including new MatrixBeam LED headlights and an upgraded line-up of EU6-compliant engines.

Built around the lightweight aluminium Audi Space Frame, the almost entirely aluminium body of the new generation A8 has been finessed by subtle resculpting of the bonnet, the single frame grille, the front bumper and the lower edge of the headlight units. At the rear, the design of the LED tail lamps has been revised and the bumper in all models bar the S8 now incorporates two rhomboid tail pipes. New chrome elements, new high gloss black window surrounds and five new colours also mark out the updated car.

The high-beam function in these unique headlights uses 25 individual LEDs per unit that can be switched on and off or dimmed individually depending on the situation. This enables the headlight system to react extremely precisely to other vehicles while always brightly illuminating the road. When the on-board camera detects other vehicles ahead, the Audi MatrixBeam LED headlights mask the relevant sections of the high-beam by dimming or shutting off individual diodes. Very bright illumination is preserved in the remaining zones.

The lighting system in the A8 uses predictive route data from the navigation system with MMI Touch to adjust the distribution of light in response to the current driving situation, and can recognise and act on route data, such as corners and road classifications. 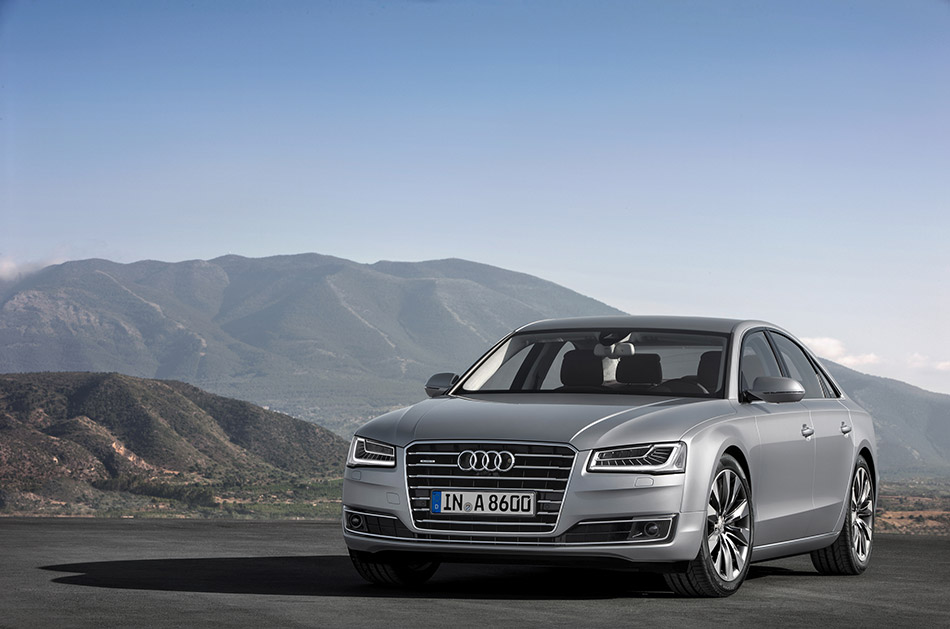 Additional features of the new headlights are the intelligent cornering lights, new-look daytime running lights and dynamic indicator lights. These indicators with a progressively expanding strip of light have the potential to significantly enhance traffic safety by making the fact that the vehicle is turning even clearer to other road users, even at long distances and in poor visibility.

Each of the indicator sections in the enhanced headlights contains 18 LEDs arranged in a strip that is subdivided into seven blocks. Each tail light indicator section contains 24 LEDs in eight blocks. When activated, the blocks are sequentially illuminated at 20 millisecond intervals, from the inside outwards in the desired turning direction. After 150 milliseconds, all segments are bright; for another 250 milliseconds they illuminate with full intensity. After very briefly extinguishing completely, they then repeat the sequence.

The length (5.14 metres), wheelbase (2.99 metres), width (1.95 metres) and height (1.46 metres) of the new generation A8 remain unchanged, and this also applies to the A8 L models with their additional 13 centimetres of wheelbase and body length added in the interest of rear passenger space.

The even sleeker new standard and long wheelbase bodies house a choice of seven petrol and TDI engines, the majority of which have been revised to improve performance and efficiency. The supercharged 3.0 TFSI petrol engine is boosted from 290PS to 310PS, the V8 twin-turbo 4.0 TFSI moves from 420PS to 435PS, the highly efficient 3.0 TDI clean diesel increases from 250PS to 258PS and the 4.2 TDI clean diesel gains 35PS, taking it to 385PS. Its already mighty torque output is also increased by 50Nm to a prodigious 850 Nm (626.93 lb-ft).

Paired with quattro all-wheel drive, the 4.0 TFSI now powers the A8 from 0 to 62 mph in 4.5 seconds, but under partial load the Audi cylinder on demand (COD) system deactivates four of its eight cylinders to give priority to fuel economy. The most efficient diesel engine is the 3.0 TDI, which returns up to 47.9 mpg, corresponding to 155 grams of CO2 per kilometre. All engines satisfy the Euro 6 standard, helped by friction-reducing measures which reduce fuel consumption by as much as 10 per cent.

The luxuriously equipped Audi A8 L W12 quattro occupies the top rung in the A8 line-up. The short and lightweight engine with its W layout displaces 6.3 litres and produces 500PS. It also boasts best-in-class combined fuel consumption of  24.1 mpg, corresponding to 270 grams CO2 per kilometre, thanks in part to a newly adopted version of the cylinder-on-demand system developed especially for this model. At low loads, it deactivates the fuel injection and ignition for six cylinders.

The 520PS S8 fulfils a different brief as the ultimate Audi sports saloon. Its 4.0 TFSI engine blasts it from 0 to 62 mph in 4.2 seconds, yet cylinder on demand technology also renders it capable of up to 28 mpg, corresponding to 235 grams CO2 per kilometre.

Active Noise Cancellation (ANC), a technology that is also employed in the A8 4.0 TFSI quattro, the A8 L W12 quattro and the A8 hybrid, ensures excellent acoustic comfort by using precise antiphase noise to combat intrusive noise in the cabin while cylinders are deactivated. Active engine mounts also dampen vibration.

At the other end of the spectrum, the overtly efficiency-focused A8 hybrid combines a 2.0 TFSI engine and electric motor to produce a system output of 245PS and system torque of 480 Nm (354.03 lb-ft). The lithium-ion battery in the rear enables purely electric driving at up to 62 mph with a range of roughly 1.9 miles. The A8 hybrid returns up to 44.8mpg and emits 147 grams of CO2 per kilometre.

The new A8 is equipped as standard with a fast and smooth-shifting, eight-speed tiptronic automatic transmission which transmits power to all four wheels via the quattro permanent all-wheel drive system in all six, eight and twelve-cylinder versions. A sport differential acting on the rear axle is fitted as standard to the A8 4.2 TDI quattro and the S8 and optional for all other versions bar the hybrids – it distributes power between the rear wheels as required for even greater handling adjustability. 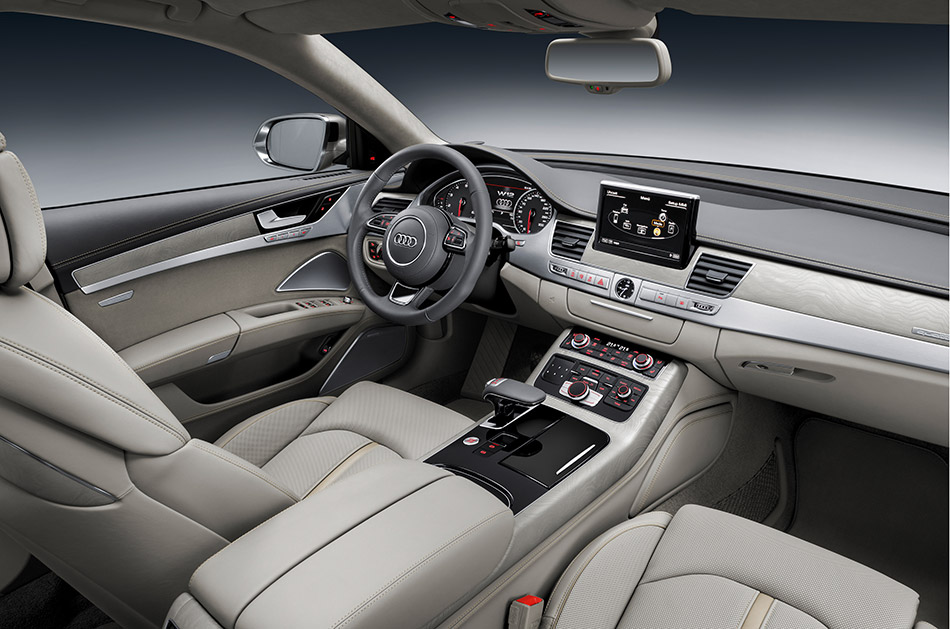 The saloon owes its sporting character as much to its sophisticated chassis as to its responsive engines and its lightweight shell. The Audi drive select system, which adjusts the operating characteristics of various controls and functions, is standard. It also influences the standard adaptive air suspension, which is available with sport settings on request. The power steering uses an efficient electromechanical drive, and can be enhanced by a dynamic steering option which varies boost as a function of the speed driven. Carbon fibre ceramic brake discs are available for V8 models and the A8 L W12 quattro. These can also now be combined with new high-tech 20-inch alloy wheels with high-strength polymer spokes.

Hand-built character: The interior of the Audi A8

In the lavishly trimmed and very comprehensively equipped interior, customers can choose from a new range of upholstery and inlays in new colour schemes. Additions include the woods Fine grain poplar brown-silver and Fine grain ash brown-gold natural as well as the leather Unikat, which is particularly natural-looking, soft and breathable.

Improvements have also been made to the optional assistance systems. Audi active lane assist, which makes slight steering adjustments when necessary, is new to the A8, as is the park assist system with 360° display, which handles steering when parking, and the head-up display, which projects important data in the driver's field of vision on the windscreen. The night vision assistant can now also recognise larger animals in addition to pedestrians.

On the infotainment front, Audi connect is available as a supplement to MMI navigation plus. It uses an integrated UMTS module to connect the new A8 to the Internet. Passengers can surf and e-mail freely via a WLAN hotspot. For the driver, the system delivers the tailored online services from Audi connect, such as online traffic information, Google Earth, Google Street View and online news, to the car. The audio highlights are the Bang & Olufsen Advanced Sound System and the Rear Seat Entertainment system which includes two displays, Bluetooth headphones and a DVD player.

The new Audi A8 is expected to reach its first UK customers in January 2014. Full pricing and UK specification information will be announced in due course.