Audi has pooled the genes of its rugged allroad models and its forthcoming e-tron hybrids to create a striking and fittingly futuristic new crossover concept bound for this month‘s  2014 North American International Auto Show in Detroit.

Incorporating a host of design elements that define the brand's future design values, the Audi allroad shooting brake combines the elegant lines of a shooting brake with the purposeful stance of an allroad. As befits an allroad-themed study, its hybrid drive – which is as powerful as it is efficient – also makes a new form of quattro drive possible - e-tron quattro.

"The show car combines sex appeal, highly efficient e-tron-quattro technology that produces 300 kW of power yet only consumes 1.9 l/100 km of fuel (equating to 149 UK mpg) and cutting-edge electronic applications," says Prof. Dr. Ulrich Hackenberg, Member of the Board of AUDI AG, Technical Development. "We are offering very concrete glimpses of the near future in this show car."

With exceptional functionality and versatility the Audi allroad shooting brake is geared towards those with an active lifestyle, but it also advances the development and design elements of one of the most recent Audi show cars, the mighty Sport quattro concept originally shown at the 2013 Frankfurt Motor Show. The main highlights of the show car are an aluminium and carbon fibre body shell, MatrixBeam LED headlights and the e-tron quattro drivetrain.

The allroad shooting brake has a wheelbase measuring 2.51 metres. It is 4.20 metres long, 1.85 metres wide and 1.41 metres tall, giving it a powerful stance on the road. The exterior shell appears as though it were sculpted from one solid piece, from the single-frame grille to the distinctive tornado line and crisp rear styling, in which the characteristics of the allroad and the shooting brake come together.

The outer body of the Audi allroad shooting brake is a material mix of aluminium and carbon fibre reinforced polymer (CFRP). Dark grey rubbing strips are typical allroad elements, and they visually reduce the volume of the body; they ascend dynamically from front to rear. Together with the large wheels and flared arches, they accentuate the car's offroad character. 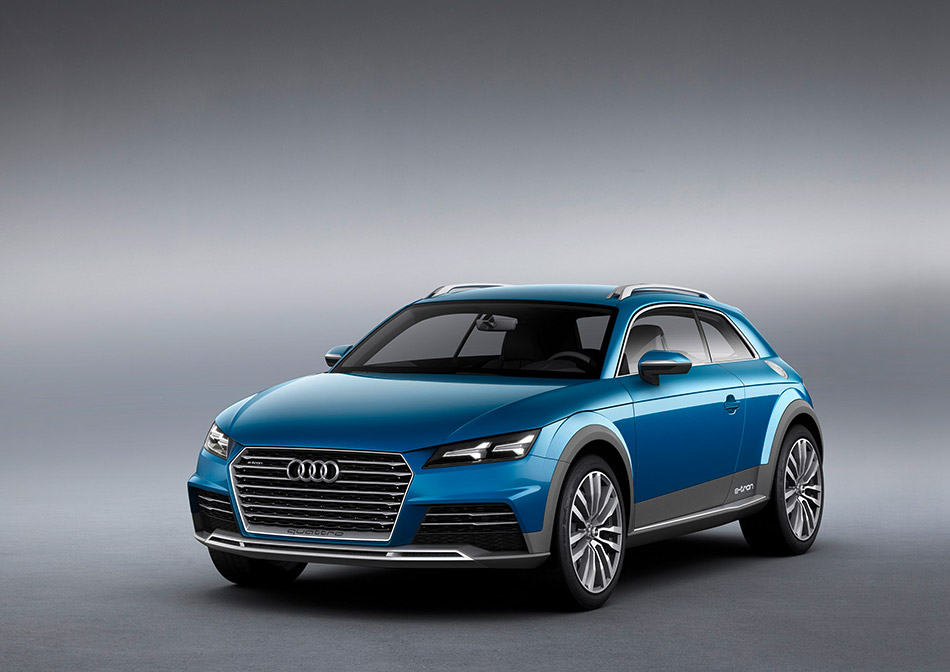 e-tron and allroad in unison

The Audi allroad shooting brake represents the first time that Audi has combined elements of the allroad and e-tron model types. As on every Audi, the large hexagonal single-frame grille dominates on the impressive sculptural front; it is slightly offset towards the rear of the body. Typical of an e-tron model, it has an insert with narrow fins, which resemble the cooling ribs of an electronic component. There is a quattro logo on the lower part of the single-frame. The low-profile central air inlet is milled into the underbody protection that is made of aluminium.

The low-profile dual headlights of the Audi allroad shooting brake are a classic reference to the look of the Audi quattro models. Braces partition the headlights into four segments; the matrix LED technology with its individually controlled light-emitting diodes guarantees excellent visibility without causing glare to oncoming traffic. Beneath the headlights, narrow cross fins provide structure to the large air inlets.

In a side view as well, the characteristic lines of the show car give the impression of concentrated energy. Its overhangs are short, and its roof line stretches low over the vehicle body. Typical of the shooting brake style, it descends early and runs out into the distinctive C-pillars. There is a charging port in the left pillar and a fuel door in the right pillar.

Fine details attest to the precision with which the show car was designed. There are aluminium inlays in the angular sill add-ons. The 19-inch lightweight wheels shod with 255/40 tyres have rims made of Carbon Fibre Reinforced Polymer (CFRP). Their finely detailed styling with seven arms is based on the look of the e-tron models, while their central locks are another feature that highlights the sporty character of the compact crossover.

At the rear, the aluminium underbody protection emphasises the car's width; its implied grooves vary from the e-tron motif. Horizontal, logically sequenced lines define the outlines of clean surfaces and taut volumes; the styling of the tail lights takes up the motif of the headlights. A diffuser integrates the two large exhaust tailpipes. The open roof spoiler further accentuates the design. The third brake light, implemented as a flat light conductor, elegantly complements the rear design.

There is plenty of room for four passengers inside. In front, the narrow sports seats give the driver and front passenger optimal body support. They feature highly contoured lateral panels and integrated head restraints, while cushioned pads support the thighs in quick driving through curves. An easy entry function makes rear seat access simpler. When the rear seatback is folded down, a cargo area with a level cargo floor is created, in which there is space for rather large sports equipment.

Designed with clean and taut lines, the interior of the show car utilises the colors anthracite and rock grey. The materials reflect the skillful handiwork of Audi designers – this is evident in the alcantara rooflining and in the various qualities of leather and the bright and dark aluminium materials that are used for controls and trim, such as on the air nozzles and the spokes of the multifunction steering wheel. 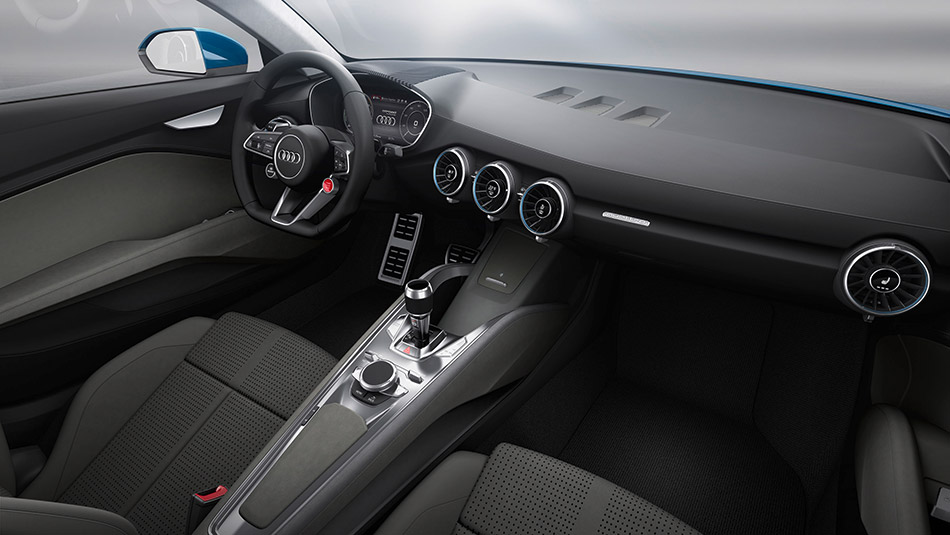 The interior design of the Audi allroad shooting brake also follows the Audi philosophy of lightweight design, sporty elegance and easy to use controls. When viewed from the top, the instrument panel resembles the wing surface of an airplane, and the round air nozzles elicit associations to jet engines. The controls for the climate control system are located here. Their centre spindles contain the controls for seat heating, temperature and the direction and intensity of the air streams. They automatically extend out from the instrument panel when they sense a hand approaching. The lights are activated by a button, and a plate-type handle opens the door.

The centre console travels together with seat adjustments so that the controls remain at an optimal distance to the driver. Individual fine adjustment is also possible. The controls – the electronic selector lever of the e-S tronic (shift-by-wire) and the terminal of the MMI user interface – are always ideally within reach and can be optimally adjusted to the height and preferences of the driver.

The new design of the MMI terminal and sporty design of the multifunction steering wheel lets the driver control nearly all functions of the Audi allroad shooting brake intuitively. The menu structure is based on that of a smart phone, which includes a free text search function. It is easy to access all major functions, and multitouch gestures on the touchpad of the MMI terminal enable quick scrolling and zooming in lists and maps.

The cockpit is very focused on the driver. The steering wheel and digital instrument cluster lie in a single direct line of sight. The TFT display with its 12.3-inch screen presents all key information in top quality 3D graphics and offers a variety of modes. In the classic view, the powermeter for the plug-in hybrid drive system and the speedometer are in the foreground, while in Infotainment mode elements such as the large navigation map dominate, and in Sport mode the tachometer is prominently displayed.

Another forward-looking feature in the show car is the Audi phone box, which links the driver's mobile phone to the vehicle electrical system and can inductively charge it as necessary.

The plug-in hybrid drive delivers impressive key performance data with 408 PS of system power and a system torque of 650 Nm (479.42 lb-ft). The show car, which weighs around 1,600 kg unladen, launches from a standstill to 62 mph in 4.6 seconds, and is capable of reaching an electronically limited top speed of 155 mph.

Fuel consumption is measured at 148.7mpg according to the relevant ECE standard, which equates to CO2 emissions of 45g/km. A total driving range of up to 510 miles is achievable.

The 2.0 TFSI in the Audi allroad shooting brake delivers 292 PS of power and generates 380 Nm (280.27 lb-ft) of torque. The transverse mounted 2.0-litre four-cylinder with a large turbocharger is a high-end engine. In part-load operation, indirect injection supplements direct gasoline injection to improve fuel economy; the exhaust manifold that is integrated in the cylinder head enables high-performance thermal management.

The 2.0 TFSI operates together with a disc-shaped electric motor via a decoupling clutch; the electric motor outputs 40 kW of power and 270 Nm (199.14 lb-ft) of torque. It is integrated in the six-speed e-S tronic. The ultra-fast shifting dual clutch transmission sends torque to the front wheels.

A second electric motor, which is separate from this drive unit, is mounted to the rear axle. It supplies propulsive power at low and moderate vehicle speeds with its maximum power of 85 kW and 270 Nm (199.14 lb-ft) of torque. It can also be operated in tandem with the motor and engine at the front axle if the hybrid management system decides that all-wheel drive makes sense. In such situations, e.g. on a slippery road or in light off-road conditions, this essentially makes the Audi allroad shooting brake an e-tron quattro.

Located just forward of the rear axle is a lithium-ion battery that consists of eight modules. It contributes towards a balanced distribution of weight, and it hardly affects cargo capacity at all. The liquid-cooled battery has an energy capacity of 8.8 kWh, which is enough for 31 miles of all-electric driving. An Audi wall box is used for stationary charging; it can operate with different voltages and plug connector types, and it regulates the energy transfer conveniently and intelligently.

Drive select management offers three driving modes. EV mode, which can be selected by a button on the multifunction steering wheel, prioritises all-electric driving. Here, the front drive unit is inactive, and the electric motor at the rear axle with its powerful torque can rapidly accelerate the two-door car to a top speed of 81 mph.

In Hybrid mode, the drive sources operate highly efficiency, and they work together in various ways as necessary. In many situations, the electric motor in front acts as a generator – driven by the engine, it charges the battery, and this extends the car's effective electric driving range.

In Sport mode, which the driver can select via the Audi drive select system, the car's full system power is available. When a high level of power is demanded by the driver, the electric motor at the rear axle works together with the 2.0 TFSI in a boost mode, in which both drive units output propulsive power.

Depending on the driving situation, releasing the accelerator pedal can cause all drive units to be decoupled, or it can result in energy recovery by regenerative braking. In the first case, the show car coasts with zero emissions since the combustion engine is shut off; in the latter case, braking energy is fed back into the high-voltage battery.

The driver can use the "Hold" and "Charge" functions in the MMI user interface to specifically influence the battery's charge state, e.g. to increase storage of electric energy so that it can be used over the final miles to the destination.

An electro-mechanical steering system is at work in the chassis of the Audi allroad shooting brake; it works together with a MacPherson front suspension and a four-link rear suspension. The sporty crossover is very talented in off-road driving thanks to its high ground clearance, compact wheelbase, short overhangs and electric quattro drive. It has a taut and sporty stance on the road, and the Audi drive select vehicle dynamics system offers various modes to the driver.