Martin Tomczyk in 2011 and Mike Rockenfeller in 2013: Two titles have gone to Audi and the race car sporting the yellow-green colors of the Schaeffler Group in the most recent past, and the reigning champion wouldn't mind if the string of success in the most popular international touring car series continued. "If the car is as fast as it looks, we've got good chances of being in contention," Rockenfeller commented about his new Audi RS 5 DTM.

The new generation of the race car that made its world debut at the Geneva Motor Show last week features newly developed aerodynamics and numerous detailed improvements underneath the carbon fiber skin. Audi has revealed the Schaeffler Audi RS 5 DTM as the first of the total of eight liveries with which the brand is competing in the DTM in 2014. While the basic colors of ‘Rocky's' car have been retained, the body contours of the near-460 hp (340 kW) touring car are now even more dynamic than before. 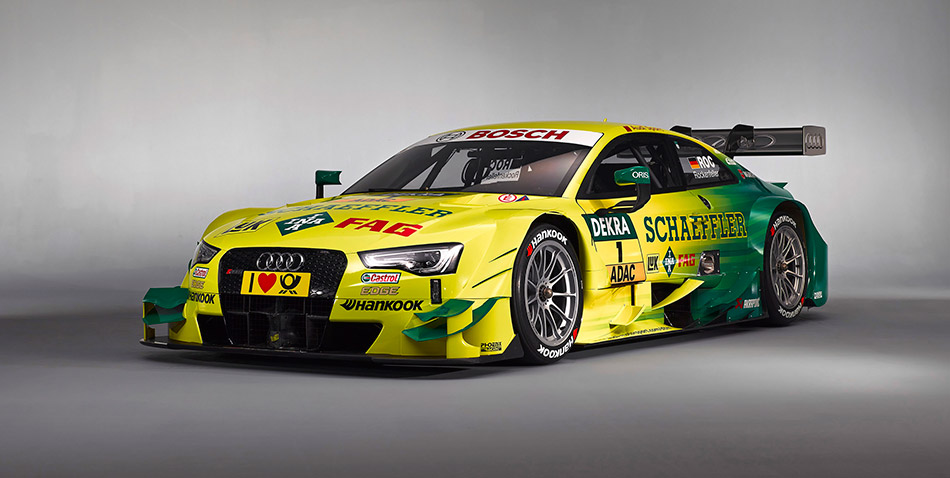 "I was thrilled as soon as I saw the initial designs but the car itself looks even more impressive," says Mike Rockenfeller, who presented his RS 5 DTM to guests on the night before Audi's annual press conference. "I'm incredibly excited about my first DTM season with ‘#1' emblazoned on the car and can hardly wait for the next track tests to start."

The schedule before the season opener at Hockenheim on May 4 has been confirmed. The Audi RS 5 DTM was homologated at the beginning of March. From March 31 to April 3, the DTM will be testing on the Hungaroring in Budapest to which the series is returning this year. From April 14 to 17, the ‘rehearsal' for the first race will follow at the Hockenheimring. Furthermore, the eight drivers including the three DTM Champions Mike Rockenfeller, Mattias Ekström and Timo Scheider got ready for the new season, which Audi has totally dedicated to the ‘title defense' mission, at a one-week teambuilding and fitness camp.