On 14 June 2005, Peugeot announced its decision to accept a new technological challenge: to win one of the world's most prestigious and demanding motor races, the Le Mans 24 Hours, with a car powered by an HDi diesel engine equipped with a diesel particulate filter system (DPFS).

This legendary race, which every year attracts more than 200,000 spectators, will provide Peugeot with an opportunity to express fully the values enshrined in its philosophy: excellence, demonstrated by the choice of endurance coupled with reliability, dynamism, emphasised by a team challenge based on performance, looks, illustrated by the car's feline profile, and lastly innovation, expressed amongst other ways through the use of technology designed to protect the environment.

The car that will display the Peugeot colours in the Le Mans 24 Hours race and in the "Le Mans Series" in 2007 will be the Peugeot 908. The choice of number comes from, "90" designating an exceptional Peugeot model and 8 the next number in sequence after the 907 concept car. 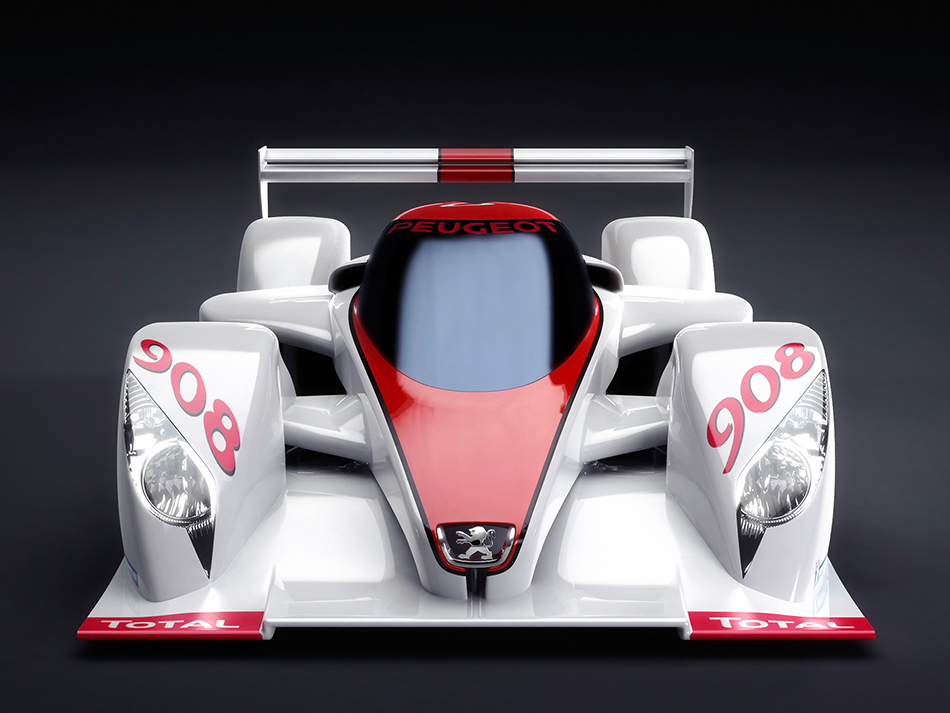 The choice of body style is that of a closed car, in line with changes to the regulations announced by the Automobile Club de l'Ouest on 16 June 2006. Equally there was also a desire to keep a link with the two-times winner of the Le Mans 24 Hours in 1992 and 1993, the Peugeot 905.

While from a technical point of view this solution presents a number of drawbacks (weight, height of the centre of gravity, operational problems), the Peugeot Sport team felt that it also offers advantages, particularly in terms of chassis rigidity and aerodynamics.

The monocoque body is made of carbon and presents a truly closed structure, contrary to the 905, which was a "racing car" with a detachable tubular rollover bar. This type of structure offers strong natural rigidity (the "eggshell" effect) and allows the weight of the monocoque body to be optimised.

Created from scratch at the beginning of 2006, Peugeot Sport's aerodynamics department had the difficult task of designing in just a few weeks an exterior body that was both original and aerodynamically efficient.

Three months after the appointment of the aerodynamics project team leader, a model of the car was undergoing the first tests in the wind tunnel!

The car's profile results not only from the necessary compromise between aerodynamic efficiency and drag, but also the need to provide optimum airflow to the different radiators and intercoolers located within the generously dimensioned bodywork.

Given the challenge of designing a complete car in record time and the particular constraints of the HDi DPFS engine, the Peugeot Sport team relied on proven solutions for the front and rear suspension design, the electric power steering and the brakes.

This is positioned longitudinally and will allow the fitment of up to 6 gear ratios, the limit laid down by the regulations. It has been designed to withstand the enormous torque of the engine, while ensuring optimum weight and size characteristics.

This is the maximum capacity permitted by the regulations and was chosen due to its greater internal airflow at low engine speeds. It also gives potential future development opportunities to use different grade fuels.

The choice of a twelve cylinder engine helps keep the cylinder bore diameter very close to that of a production series engine. In doing so, Peugeot can call on its extensive knowledge of diesel combustion and also ensure the engine has a reasonable piston stroke. The V12 architecture, well known for its good balance, also reduces vibrations to a minimum.

The 100° V angle, like the V12 architecture, makes it possible to lower the height of the centre of gravity without affecting the engine's torsional rigidity. Two diesel particulate filters are located at the end of each exhaust system and guarantee "smoke-free" operation of the engine under all conditions.

The two exhaust systems are as short as possible. On each side a 6 into 1 exhaust manifold is connected to a Garrett turbocharger, then to a very compact diesel particulate filter before ending in a side exhaust pipe, located in front of the rear wheel. The expected level of performance – a power of more than 515 kW (700 bhp) and a torque in excess of 1200 Nm, which is unprecedented for a diesel engine – is a direct results of Peugeot's diesel engine expertise, combined with the mechanical specification of the V12 engine.

The 908 will benefit fully from Peugeot Sport's considerable expertise and knowledge in electronics, acquired as a result of its extensive experience with WRC cars – which are generously equipped with electronic systems – and in particular with respect to their experience of electronically controlled differentials.

Peugeot Sport will also benefit from the experience of the main supplier Bosch, who will be supplying and developing the "car system" on the basis of specifications provided by Peugeot Sport.

A high level of performance is therefore expected in terms of "traction control", a key function for controlling engine torque in a race track environment, whilst also ensuring optimum performance of the Michelin tyres.