With more power, a retuned suspension, an upgraded interior, a host of new features and a restyled coupe model, the 2014 Civic Si is ready to impress. Add to this a Best Resale Value Award from trusted vehicle valuation source Kelley Blue Book and a minimal $275  increase in the starting price, and the 2014 Civic Si is poised for success. The 2014 Honda Civic Si Coupe goes on-sale tomorrow, March 12, with a manufacturer's suggested retail price (MSRP) starting at $22,790. The 2014 Civic Si Sedan goes on-sale March 26 with an MSRP starting at $22,990.

The restyled 2014 Civic Si Coupe, riding on larger (+1 inch) performance-styled 18-inch alloy wheels, has an aggressive, sporty presence. As with all 2014 Civic coupe models, the Si styles a more aggressive hood, front fenders and headlight designs, and new taillight lenses and side mirrors. The sporty aura of the Si is further accentuated by an Si-exclusive grille and lower front-bumper garnish and rear air diffuser, and a large wing spoiler. Inside, Si-exclusive seat fabric and trim is enhanced with a sport-oriented black and red color scheme and the audio panel received a high tech, race-inspired carbon fiber-style design. 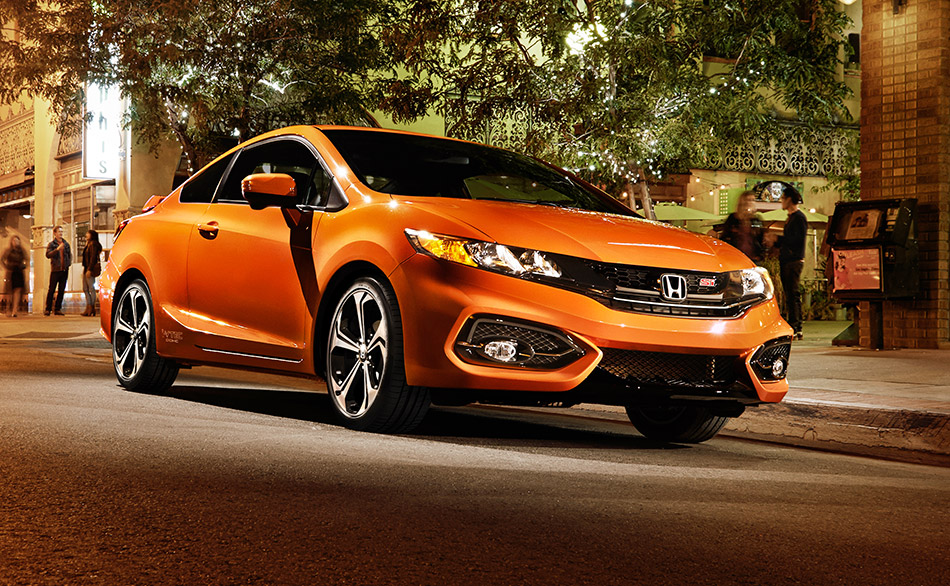 To back up the bling, a retuned exhaust system boosts the engine output of both the Si Coupe and Si Sedan by 4 horsepower (205) and 4 lb-ft of torque (174). The Si's 2.4-liter i-VTEC® DOHC 16-valve engine is mated to a close-ratio, 6-speed manual transmission. For superior sport handling, the suspension is revised with higher rate springs, new dampers and a stiffer rear stabilizer bar.

As much fun as the Si's engine and chassis offer, there is more to enjoy in the interior. For 2014 the Si Coupe and Si Sedan add as standard equipment Honda's new 7-inch Display Audio touchscreen, which uses a smartphone-like interface, allowing users to swipe, tap and pinch their way through audio, phonebook, media, vehicle information and available navigation features. The display is also the interface for the next generation HondaLink™, the application based platform that connects customers to smartphone-provided online content both inside and outside the car. Also standard on the 2014 Si is the convenient Smart Entry with Push Button start, expanded view driver's mirror and Honda LaneWatch™ display for enhanced driver visibility.