More powerful, more efficient, more intelligent: the new Audi A4 and A4 Avant feature numerous premium technologies which set higher benchmarks for their class. Elegant design blends with an innovative control concept, and lightweight construction meets new, efficient drivetrain solutions. The A4 and A4 Avant are also ahead of their peers in terms of infotainment and assistance systems. As a result, UK customers who will begin taking delivery of their cars in late 2015 can look forward to a truly high-tech experience ― an innovative synthesis of technology and aesthetics.

When it comes to aerodynamics, the two new models dramatically outpace the competition. The A4 Saloon has the best drag coefficient in its class at 0.23, and the A4 Avant pierces the air almost as cleanly with a 0.26 figure. The new models also have impressively low CO2 emissions which in the 2.0 TDI ultra dip below 100g/km. 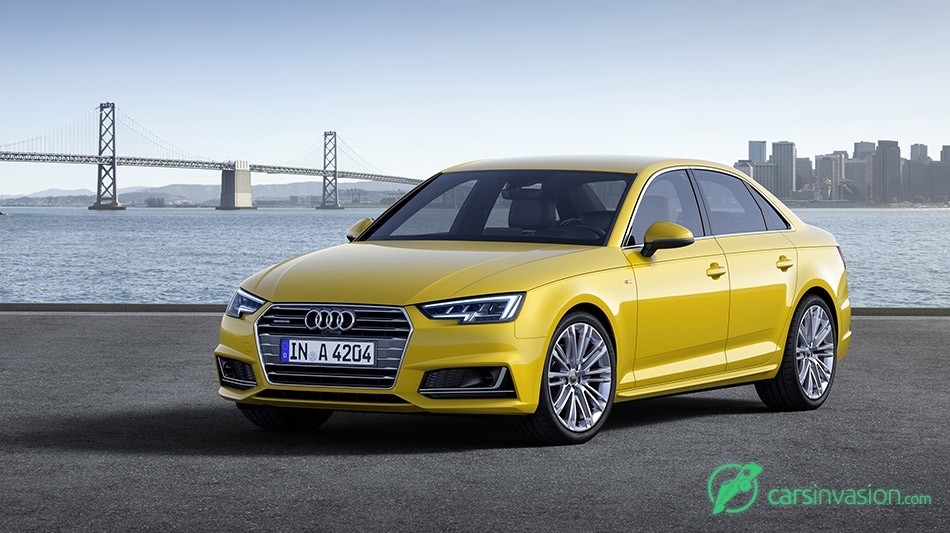 The most powerful engines are two TDI six-cylinder units with up to 272PS. Driver assistance and infotainment systems are of luxury quality. A new generation of four-cylinder TFSI engines with newly developed combustion methods sets benchmarks in terms of fuel consumption, emissions and performance for four-cylinder petrol engines.

At 4.73 metres long and with a wheelbase of 2.82 metres – the new Audi A4 and A4 Avant have a confident stance on the road. A prominent horizontal line on the front and rear emphasises the car's width. The flowing design with concise lines communicates the sporty elegance of the brand. The Singleframe grille is wide and low; the optionally available headlights in LED and Matrix LED technology (including dynamic indicators) make technology a visual trademark.

Up to 120 kilograms lighter

Compared with the previous model, the car's dimensions have grown but its weight has been reduced significantly – by up to 120 kilograms, depending on the engine. The body of the new Audi models is one of the lightest in its class thanks to an intelligent material mix and lightweight construction.

The Audi A4 is a leader in its class also in terms of noise levels. All occupants enjoy generous space; the smooth lines emphasise the width of the interior. The front of the dashboard features a broad band of air outlets and a large decorative surface. At night, optional discreet contour lighting illuminates the doors and the central console. The quality of workmanship is uncompromisingly high. Colours and materials follow a new line concept allowing customers even more freedom during configuration.

Sensor-controlled opening of luggage compartment: the A4 Avant

The luggage compartment of the new A4 Avant offers storage space of 505 litres, which is the highest value in this class. With the rear seats folded down and loaded to the roof, a volume of 1,510 litres is available. The electric luggage compartment cover and electric tailgate are standard equipment. An optional extra is sensor control for opening and closing the tailgate.

The two new models offer an abundance of intelligent technologies, the use of which is even more intuitive with the new Audi MMI display and control concept. Technological highlights of the new A4 include the Audi virtual cockpit, the Audi Matrix LED headlights, the Audi smartphone interface, the Bang & Olufsen Sound System with 3D sound, the Audi phone box with wireless charging, the head-up display, and new driver assistance systems and Audi connect services.

Information and fascination: the Audi virtual cockpit and the MMI

The focus here is on two innovations. The optional Audi virtual cockpit, a fully digital combination instrument, features a 12.3-inch LCD screen that displays the most important information in brilliant high-resolution graphics, with great detail and sophisticated effects.

The MMI control concept in the centre console is also a newly designed feature and acts as the main control element. The top-end infotainment system, MMI Navigation plus with MMI touch and a large 8.3-inch monitor, has a touchpad in the rotary controller to zoom in and out and to enter characters. The entire MMI control logic is similar to that of a smartphone and includes an intelligent free-text search function. The new, more natural, voice-control system also understands input in normal everyday language, such as "I want to call Peter Miller." 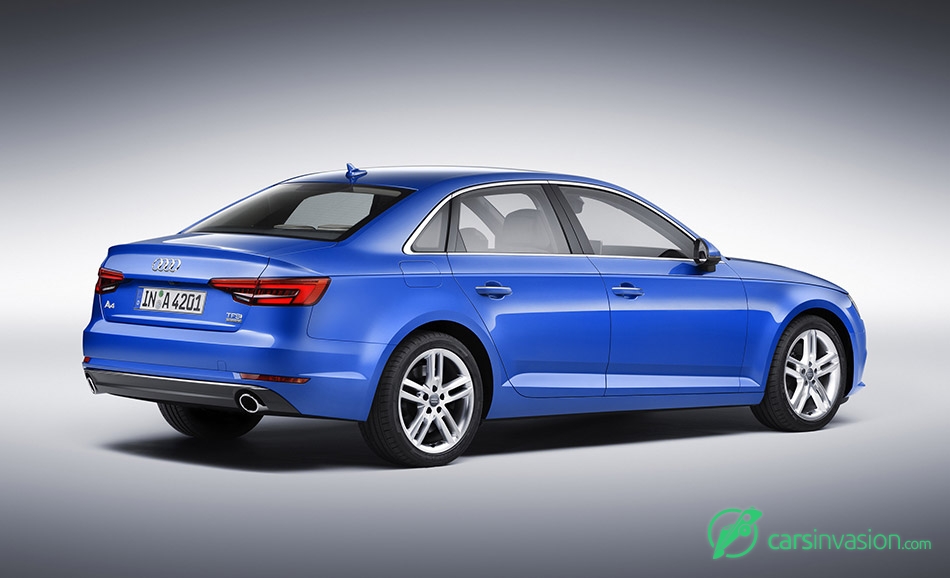 MMI Navigation plus is backed by the computing power of the second-generation modular infotainment platform, which allows Audi to bring consumer electronics innovations into the vehicle quickly.

If customers order a car with MMI Navigation plus, they automatically receive the Audi connect hardware module, which connects the A4 and A4 Avant with the Internet via the high-speed LTE network. Passengers can surf the Internet and send and receive e-mail with their mobile devices via a Wi-Fi hotspot while the driver can use the tailored services of Audi connect.

The Audi smartphone interface is a new standard feature. It supports Apple CarPlay and Android Auto platforms and displays smartphone contact and information such as navigation mapping on the MMI screen. The Audi phone box connects smartphones to the on-board antenna and charges them inductively according to the Qi standard. For discerning hi-fi fans, the Bang & Olufsen Sound System with innovative 3D sound is available, which introduces the additional dimension of height. The new Audi tablet can also be used as flexible rear seat entertainment.

The new Audi A4 and A4 Avant will launch with seven engines - three TFSI and four TDI. Their power output has increased significantly and ranges from 150PS to 272PS, but fuel consumption has been reduced by up to 21 percent. CO2 dips below 100g/km in the 2.0 TDI ultra Saloon. All engines combine high efficiency with outstanding responsiveness and refinement. This applies in particular to the two 3.0 TDI six-cylinder engines.

The new Audi A4 has a groundbreaking innovation for the petrol engines: The 2.0 TFSI ultra with 190PS uses an absolutely new combustion method that makes it especially efficient. During the model lifecycle, a g-tron version will be launched in markets with the appropriate infrastructure which can use natural gas or the sustainably produced Audi e-gas as fuel.

The powertrain and the chassis of the new Audi A4 and A4 Avant have been completely redeveloped. The six-speed manual transmission, the seven-speed S tronic (now also available for front-wheel drive) and the eight-speed tiptronic have been redesigned; the automatic transmissions now offer a fuel-saving freewheeling function. Wheel-selective torque control supplements the work of the front-wheel drive and the quattro drive. For the most powerful TDI, Audi will offer the sport differential on the rear axle as an option from 2016.

The handling of new A4 makes a great leap forward. The suspension and steering filter out disturbances such as an uneven road surface, but communicate to the driver important information such as increases in lateral forces and tracking. This performance is based on the redeveloped five-link axles and the electromechanical power steering. They lay the foundation for dynamic handling and first-class ride comfort while also reducing fuel consumption. Additional options are dynamic steering, which varies its ratio according to the car's speed and the steering angle, and suspension with adjustable shock absorbers with which the driver can for the first time select between two settings: sports or comfort. Both of the suspension settings are included in the Audi drive select driving-dynamics system, which is standard equipment in the UK. 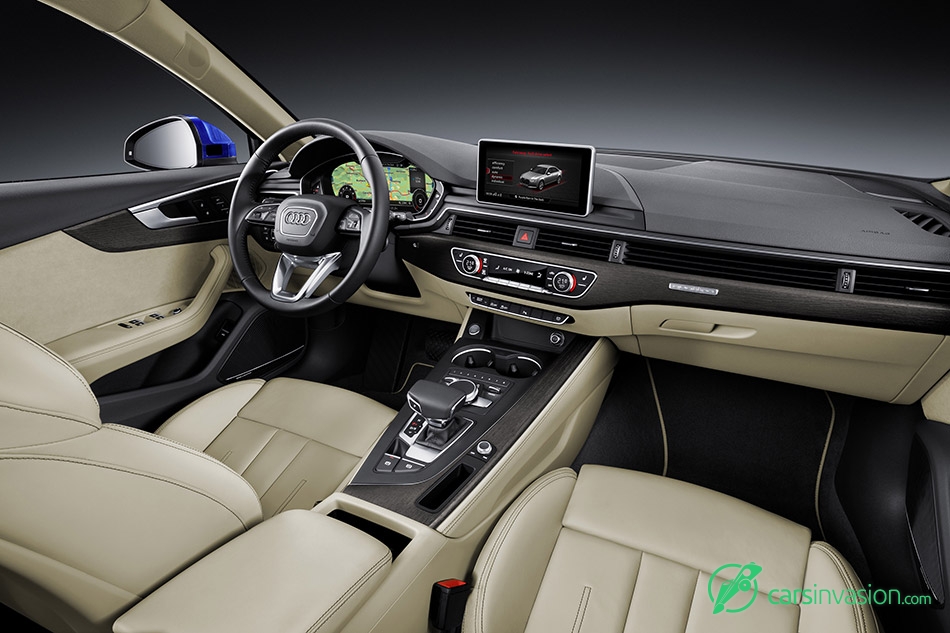 Widest range in its class: driver assistance and safety systems

The Audi A4 and A4 Avant set the benchmark in their class with numerous driver assistance systems. The predictive efficiency assistant helps drivers to save fuel, Audi active lane assist helps them to stay in lane and the Stop&Go adaptive cruise control including traffic-jam assist eases driving in slow-moving traffic. One special feature of traffic-jam assist is its control strategy. It takes into account a large number of parameters such as road markings and the traffic ahead. Some more innovations that make important contributions to safety are parking assist, rear cross-traffic assist, exit warning, collision avoidance assist, turn assist and the Audi pre-sense systems. Camera-based traffic-sign recognition is also available.

The two new Audi A4 models will be available to order in the UK later this summer - deliveries of the Saloon will begin towards the end of the year and the Avant will follow in early 2016. Their standard equipment is even more comprehensive than that of their predecessors. It includes 17-inch alloy wheels, xenon headlights with LED daytime running lights, the Audi smartphone interface, keyless go, a Bluetooth interface, Audi drive select, a 7-inch MMI colour display and three-zone climate control.