Once the BMW RS/M3 made by the RS-RACINGTEAM company is still successful, by now, the tuning company from Viernheim, Germany, does consequently the next step presenting starting from about April 2014 another highlight: The top model of the new BMW 2 coupé, named M235i, offering itself seen its weight and size as tracktool, thoroughly, when power improved, able to stand up to BMW M3.
Of course, the equipment of the bolide can be picked individually. In the case of the here presented special edition model named GREEN HELL EDITION the professionals of the South Hesse RS-RACINGTEAM have played out the whole program of possible tuning features. 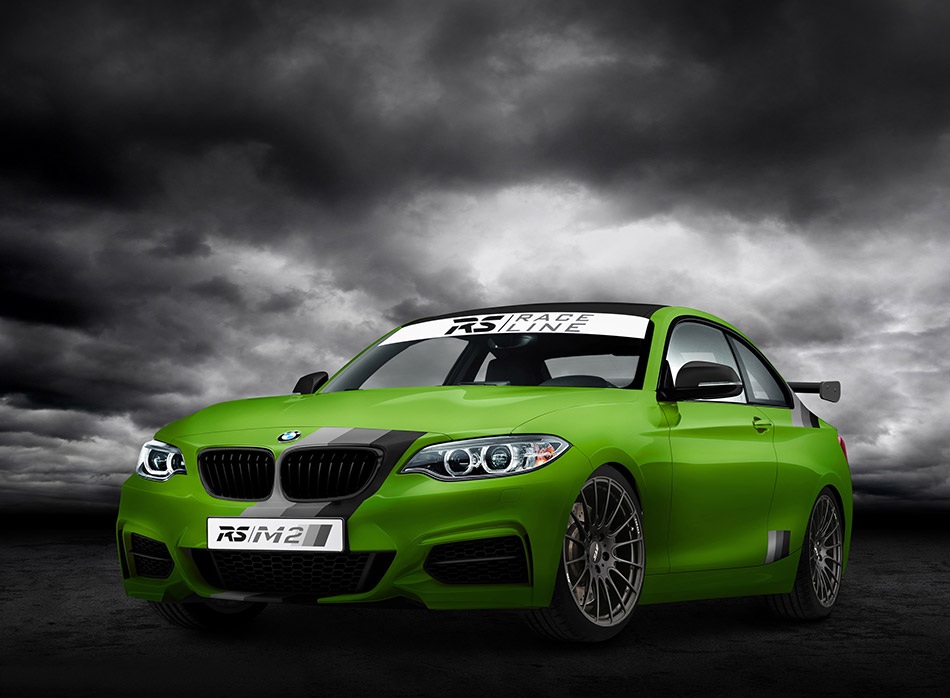 The interior including bitumen mats has been "cleared out" in favor of weight minimizing and completely painted, the floor pans on driver and passenger sides in mat black and all kind of cable harness have been carefully wrapped. The full cell safety cage without back seats is screwed and also painted. As seats you can find on both sides racing shell-type seats with 6 point seat belts and both door panels made in carbon. Finally, the fire extinguisher in the passenger cabin earns to be mentioned honorably.

As wheel-tire-combination for "exploitation" there are available Michelin semi-slicks on BBS or ATS rims in 18 inches that one can choose by colors. Another 18 inches rim set for rain with street tires large of 225 or 245, respectively, is also offered within the program. Instead of screws, the wheels are fixed by studs with wheel nuts. The wheelwork is combined with KW Clubsport coilovers.
The braking system is equipped by steel flex tubes and racing sports braking fluid. Likewise, the motorsport brake pads by Ferodo have been preferred on front and rear axle.

The bonnet has e.g. two lockable motorsport clasps. Because of the higher strain on race track, a sufficient air supply has been made sure for the front braking system some deeper. Also, a tow slope eye each in front and rear is installed. The made by GFK rear wing rests on aluminum holders.

Equally because of the higher strain on race track, there have been installed engine and gear brackets for motorsport. The manual 6-speed gearbox has sports automatics with steering wheel paddles. The two exhaust system end pipes are made by the Supersprint company in stainless steel, allowing also other configurations. Last but not least, there has been made a "RS-Wrapping" with M-stripes, lettering and window key. Power improvements and speed delimiting are also possible, of course. But since there are several options, this kind of performances is offered individually for each buyer.

Of course, another equipment is possible, like a fire extinction system with interior or remote control, differential cooling with temperature indication, alternative exhaust systems, wheels and tires, electrical emergency stop system with interior or remote control, welded safety cell etc.
For more information and details about the configuration possibilities for your car please contact RS-RACINGTEAM directly.
New cars with street allowance are available – depending on scope of equipment – beginning at 57.800,00 € including 19 % VAT directly from RS-RACINGTEAM, and, in all probability, since the above mentioned date (April 2014).