The first-generation Nissan Murano had a profound impact on the SUV market when it was introduced for the 2003 model year. In addition to being one of the first crossovers on the market, it offered a fresh design sensibility that combined an elegant style with premium features - without a luxury price tag. Murano quickly attracted a loyal, enthusiastic owner base and remained a "class of one" as other manufacturers scrambled to catch up.

The second-generation Murano, introduced for model year 2009, maintained its strong position as the halo vehicle for Nissan crossovers - even as new Nissan SUVs like the bold JUKE sports crossover, all-new unibody Pathfinder and compact Rogue joined the product portfolio.

When it came time to consider an all-new third generation, Murano had a high standard to meet - its own. So while the original was inspired by the elegance of the famed Italian Murano glassware from which the model took its name, the third-generation took its cues from the future, expressed in the form of the Nissan Resonance Concept vehicle. 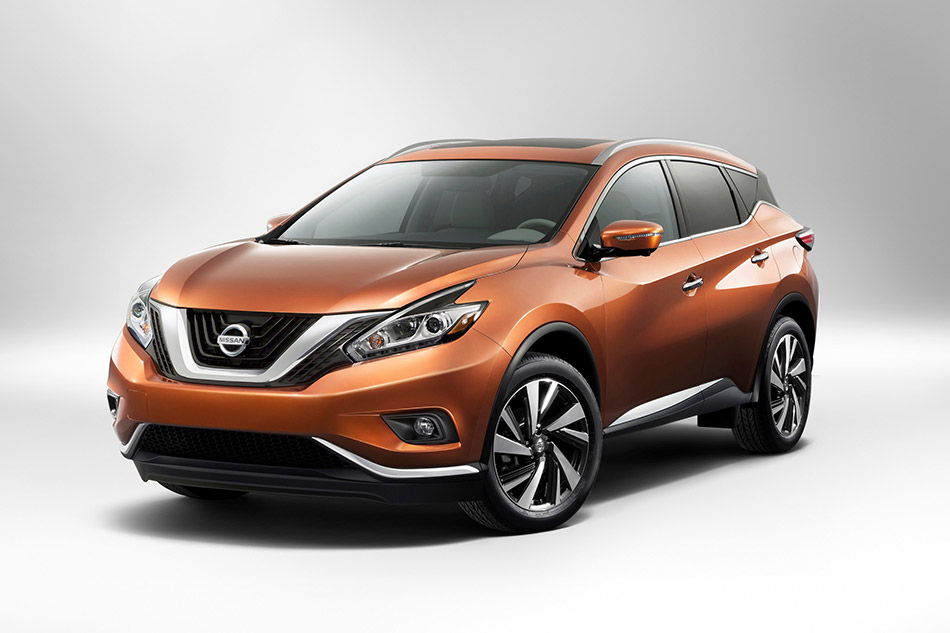 A Concept Brought to the Showroom

"At Nissan, we create concept vehicles with an eye toward production, rather than just for entertaining auto show audiences," said Andy Palmer, chief planning officer and executive vice president, Nissan Motor Co., Ltd. "Likely few people who saw Resonance in its North American International Auto Show debut imagined that we could build such a futuristic design. But here it is, ready to hit Nissan showrooms less than 24 months later."

Though one was conceptual and the other production-based, Resonance and the new Murano were created on parallel tracks - with shared design themes and key attributes such as their boomerang lights and unique floating roof treatment.

Like the first-generation Murano, the 2015 version is a highly sculptural, highly emotional design - one that once again stands out in a field known more for uniformity and utility-based styling.

"Murano owners live in an environment - home, work and car - that is beautiful, well-designed and efficiently run. They are social and embrace technology," said Palmer. "The new Murano had to embrace all of these values, while also taking a major leap forward in terms of its 'Wow' factor."

Working to capture the breathtaking spirit and artistry of the first Murano, the designers began by concentrating on the new vehicle's sculptural qualities. Breaking the usual order of sketching, computer renderings and then clay modelling, the Murano team started working with small three-dimensional clay forms - literally exploring organic shapes and volumes with mini desktop sculptures. The process helped narrow down a new Nissan design direction focused on lightness and efficiency.

A Lightness of Form

"One of the central constructs for both the exterior and interior of the new Murano was to 'elevate your experience,' which is counterintuitive to the heaviness and chunkiness of the traditional sport utility vehicle," said Nakamura. "This helped inspire the push for leading-edge aerodynamic and three key elements of our future designs - the V-Motion front end, signature lighting and the 'floating' roofline."

In keeping with the idea of futuristic travel, the designers sought to create a gravity-like power to pull viewers into the design visually, while defying gravity with a lightness of form through the use of glass and flowing lines. The prominent glass areas of the first-generation Murano were retained and expanded with the new design, including the use of its jet-inspired roof and D-pillars that appear disconnected from the roof that help visually lighten the cabin. The result is a unique floating feeling that can be recognised from very far away.

Another key element is the continued refinement of the boomerang-style headlights and taillights, which were originally introduced on the Nissan 370Z. For use with the new Murano, the shapes were slimmed and pushed to extremes to look like they flow with the wind. "The lights' LED Daytime Running Light accents are instantly recognisable at night. While becoming a Murano signature, they were an engineering challenge," explained Nakamura.

The available LED headlights, while providing excellent efficiency and durability (versus halogen and xenon lights), required extensive tuning to refine the shape and light intensity. The design of the standard LED taillights had to be balanced with the required crossover utility, with the final shape seamlessly integrated into the rear glass, conveying a high-tech quality.

Murano's sculptural bodysides also created an engineering challenge, especially in the strong curvature of the rear fender stampings. While similar in dimensions to the previous generation Muranos, the new design is slightly lower, wider and longer, enhancing the aerodynamics while not compromising the desired crossover height and stance. The lower rocker panels offer a balance of aerodynamics and ruggedness. Other critical details, such as the grille shutter, fender lip mouldings, rear bumper surfacing, rear tyre deflectors and integrated rear spoiler help achieve a more than 16 percent improvement in overall aerodynamics (versus the previous generation design).

"The designers and engineers invested three times the normal wind tunnel testing of the new Murano to get to its 0.31 coefficient of drag, on par with many sports cars," added Nakamura.

A New Way to Travel

"Beyond the sense of elegant style and premium features, owners of the first two generations often tell us about the 'effortlessness of Murano' - the great front view, the low instrument panel, the comfort and ease of operation. These are all things we kept and exaggerated in the new model," said Nakamura.

The exterior theme of futuristic travel and refined intensity continue throughout the Murano interior, starting the moment the doors are opened with its available advanced lighting system, open and comfortable feeling and use of premium materials.

Continuing the idea of a concept car brought to production, the new Murano shares the look and feel of the Resonance. The upscale social lounge interior, for example, creates an inviting and comfortable atmosphere. The instrument panel height is lower than previous Muranos. Centered between the outer wings is a large information and control centre with an available 8.0-inch color display with multi-touch control. Keeping with the idea of "beauty with simplicity," the number of audio and navigation switches has been reduced by 60 percent - from 25 to 10 - for a more user-friendly experience.

"We've learned from personal electronics that consumers aren't always looking for devices that do more, they just want it done better," said Nakamura. "People rarely read the directions for their smartphone because they know intuitively how to operate them. We believe vehicles should behave the same way - it's a new and better way to travel."

Adding to the driver's sense of connectedness with security is Nissan's Advanced Drive-AssistTM Display - an enhanced version of the popular instrument panel feature offered in the new Altima and Pathfinder. For use in the new Murano, it includes a number of new features, including a 7.0-inch high-resolution color display.

Nissan's advanced NASA-inspired Zero Gravity seats are standard for front and rear outboard occupants. The rear seats are a three-cushion design, a first for a Nissan vehicle. Climate-controlled seats (heating and cooling) are available in front, along with available Quick ComfortTM heated rear seats.

Overhead, the available Power Panoramic Moonroof enhances the open, airy feeling. The moonroof has a 40 percent longer sliding length and 29 percent larger opening than the previous generation design. It is projected to be among the largest moonroofs in the segment.

Conversation between front and rear occupants is encouraged by the new Murano's "communication alley" created by the wide, low centre console. The console also includes a compartment for rear occupants' smartphone. There is also an available USB port for the rear seats that allows for control of music and display, along with ample storage areas and compartments throughout the interior.

"We want everyone to feel like they are being taken care of, not just the driver. It's a continuation of the social lounge theme introduced in the Resonance Concept - a place you want to share with friends," added Nakamura. "Of course, not to be overlooked is Murano's crossover versatility, which is why the segment has become so popular in the first place."

The new Murano's cargo area has been reconfigured (versus the previous generation) to provide a projected best storage space in the segment (with seats up). The rear cargo area, for example, accommodates four large suitcases, while the rear seats fold flat for greater cargo convenience. With the easy rear seat release and available power rear seat return, Murano converts from people hauler to cargo ship or back within seconds. All configurations can be done from the back, with no walking to each door.

Standard 3.5-liter V6 and an Extra Set of Eyes

The 2015 Murano will be available at launch with a standard 3.5-litre DOHC V6 rated at 260 horsepower and 240 lb-ft of torque. Also standard is an advanced Xtronic transmission tuned for quick response and smoothness. Fuel economy is projected to be enhanced by approximately 20 percent versus the current generation Murano, due to the approximate 130-pound overall weight reduction, enhanced aerodynamics and engine/transmission efficiencies.

Like the previous generation, the new Murano will offer responsive handling and a comfortable ride through use of a 4-wheel independent suspension featuring a front strut/rear multi-link design. Also standard are 4-wheel disc brakes with Anti-lock Braking System (ABS) and power-assisted rack-and-pinion steering. Sporty 18-inch or 20-inch machine-finished aluminum-alloy wheels are also available. The 2015 Murano is offered in front-wheel drive or intuitive all-wheel drive.

"While driving a new Murano is designed to be an exciting social experience, we also intend it to be a safe one," said Andy Palmer, chief planning officer and executive vice president, Nissan Motor Co., Ltd. "We've given Murano 'an extra set of eyes' - a suite of advanced safety features designed to help look out for you."

The new Murano incorporates up to four onboard cameras (front, rear, two side) and three radar systems (one front, two side) to provide input to a range of available technologies, including Blind Spot Warning (BSW), Predictive Forward Collision Warning (PFCW) Forward Emergency Braking (FEB) and Intelligent Cruise Control. The new Cross Traffic Alert (CTA) system utilizses radar to detect a vehicle approaching from either side of the Murano when backing out of a parking space.

Parking a new Murano is made easier with the available class-exclusive Around View® Monitor with Moving Object Detection, which is designed to reduce the normal complexity of parallel parking by giving an all-around view of the surrounding area from front, rear and side cameras.

The system is not just for parallel parking, however, helping view the vehicle's placement in pull-in spots, garages and against curbs. The Moving Object Detection (MOD) system helps the driver to detect moving objects such as shopping carts or strollers when backing out via an on-screen notification and warning chime.

"With advanced, purposeful technology designed to keep you safe and connected, along with its refined everyday driving experience, this all-new Murano adds the solid substance to go with its unmatched emotional style," said Palmer.

A Range of Models, Now Assembled in America

The 2015 Nissan Murano will be offered in four grade levels when it goes on sale in late 2014: S, SV, SL and Platinum. Each is available in front-wheel drive or all-wheel drive.

The new Murano also becomes the first Murano (and the ninth vehicle) assembled in Nissan's Canton, Mississippi plant, which is the most diverse facility by number of models in Nissan's North American network. The Canton Vehicle Assembly Plant becomes the global source for Murano production, creating export opportunities to more than 100 markets. Murano will be assembled on the same line as Xterra, Frontier, Titan and Armada.

"Murano resets the standard in class once again," concluded Palmer.