New Renault Clio is the first production model to give full expression to the Renault design renaissance inspired by Laurens van den Acker, Senior Vice-President, Corporate Design. The promise was to take the style and emotion of the brand's latest concept cars and bring them to production models. Renault's new small family car fulfils that promise.
"New Renault Clio was conceived as a piece of sensuous sculpture which stimulates desire. Like muscles, its curves express the dynamism radiated by the DeZir concept car. No acute or aggressive angles, just voluptuous curves that make you want to go up to it and caress it." Laurens van den Acker (Senior Vice-President, Corporate Design)

New Renault Clio stands out through its front-end design which features a prominent Renault logo, set bold and upright to a gloss black background, an arrangement first seen on the DeZir concept car. This frontal treatment is further emphasised by the headlights – the lower edge of which is picked out in chrome – and LED daytime running lights. Offered only in five-door form, New Clio has a sporty silhouette, accentuated by integrated rear door handles concealed close to the rear quarter lights. In comparison with its predecessor, it packs extra dynamism and personality thanks to a lower ride height, wider tracks, wheels pushed out wide within the arches, and a reduction in the gap between the wheels and wheel arches. From launch, New Clio will be offered in a choice of eight body colours, including the launch colour (Flamme Red) which is derived from the red used for DeZir. 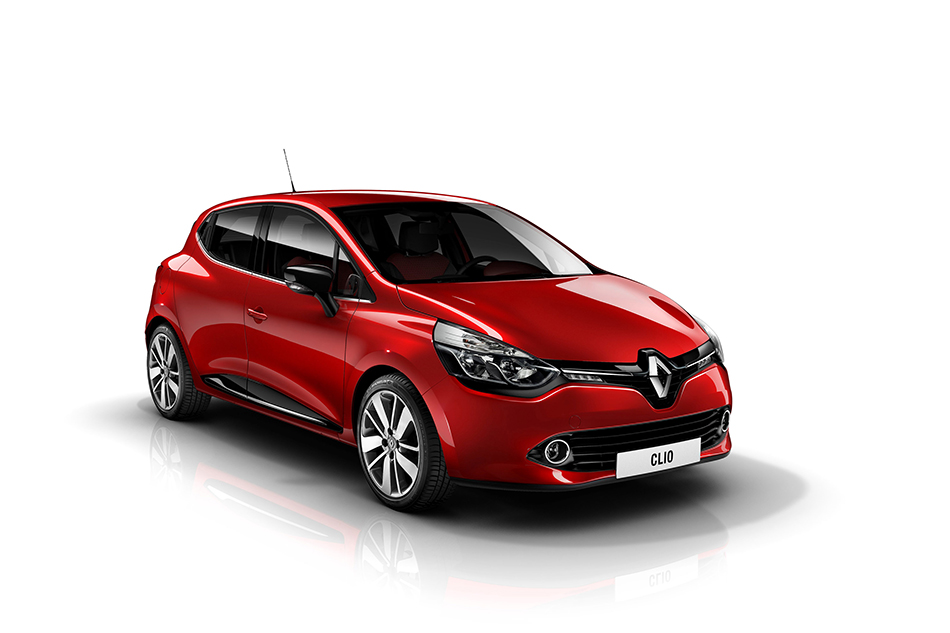 Safe, protective and refreshing, the interior of New Renault Clio perfectly complements the exterior style to inspire confidence and energy. Comfort goes hand-in-hand with a modern feel and user-friendliness thanks to the dashboard sculpted in the shape of an aircraft wing, the optimally-positioned multimedia system on the centre console, a wide range of colour options, a digital speedometer, comfortable seats and chrome and piano-black trim highlights.

Broadest-ever personalisation programme, with a long list of affordable options

Exterior and interior personalisation was dialled into New Renault Clio's design process at the very beginning. From launch, buyers will be able to personalise the exterior of their vehicle with a selection of door mirror housings, grille bars, rear panel skirts, lower door protectors and wheel finishes, as well as a choice of roof graphics. To personalise the interior, the menu covers the dashboard, door panels, steering wheel, grab handles, gear lever surround, air vent surrounds, upholstery materials and optional floor mats. Thanks to attractively-priced option packs, buyers are able to choose the look and feel they prefer.

When it comes to innovation, New Renault Clio keeps up the Clio tradition of redefining expectations within its segment and raising the standards for small cars.

Having been first with notable innovations such as steering wheel-mounted radio controls (1982, R11 Electronic) and in-car navigation (1994, Safrane), after bringing keyless entry to the volume market (in 2001) and GPS navigation with a high-resolution screen (Carminat TomTom® priced at €490 for Clio in 2009), and having launched on-board connected navigation in the shape of Carminat TomTom® LIVE for Clio, Renault continues its stream of innovations with Renault R-Link.

Available as an option for New Clio, Renault R-Link provides a bridge between the car and the connected world outside thanks to:

The scope of Renault R-Link's connected functions will continue to expand thanks to ‘Paris Incubateurs' (a Paris-based hot-house for young talent) and to an appeal extended to start-ups at the LeWeb'11 show. Over and above the services provided by TomTom® LIVE and the COYOTE app, which alerts the driver to dangerous situations (in countries where this feature is available), R-Link users can also check their messages, for example, manage their diary, locate the nearest service station or place to park, or send a tweet…. 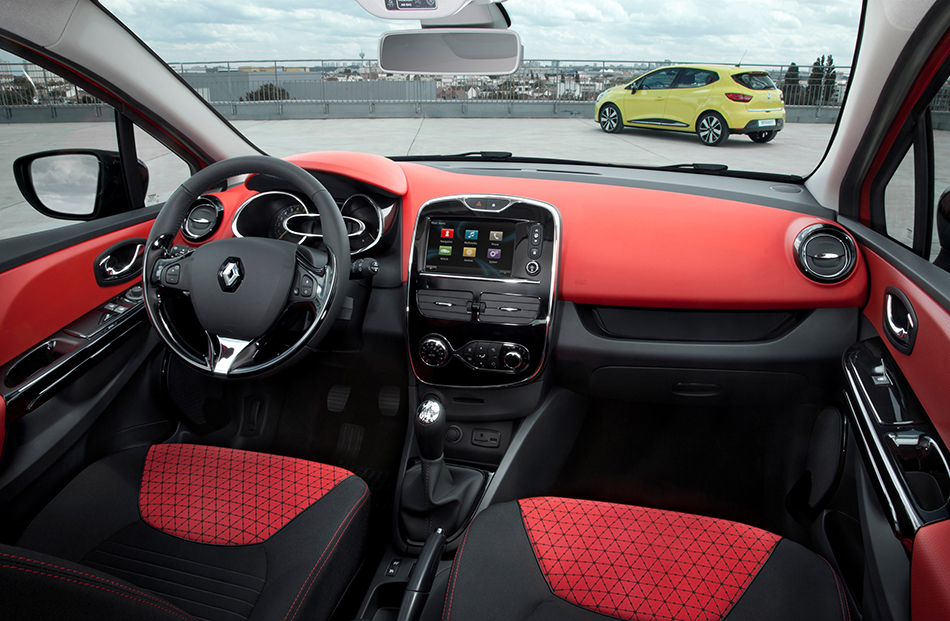 New Renault Clio will also be available with the MEDIA NAV system which is standard equipment for two from three equipment levels.
The intuitive, centre console-mounted MEDIA NAV system features a seven-inch (18cm) touchscreen, a radio and a Bluetooth® function for the audio streaming of music and hands-free use of a mobile phone. Portable music players can be connected via the fascia-mounted USB port or jack socket. MEDIA NAV is available with ‘Nav N Go' navigation with 2D and 3D (Birdview) displays.
‘NAVTEQ' maps can be updated via the USB port from a bespoke internet interface.

All versions of New Renault Clio are available with a clever sound system integrated into the front doors' loudspeakers. Known as Renault Bass Reflex, this system delivers the volume and listening enjoyment of a 30-litre home speaker enclosure. Bass frequencies are more powerful and the threshold of saturation and distortion is pushed much higher.

New Renault Clio: a pleasure to drive, and targeting number one status for fuel economy and low CO2 emissions

New diesel Energy dCi 90
The latest addition to the Energy family is a new 90hp version of the 1.5 dCi, equipped with Stop&Start:

New Clio will be available with the new, dynamic TCe 120 engine mated to six-speed EDC transmission (Efficient Dual Clutch), a first for Renault in the B segment:

This engine is currently in the process of being homologated and will become available in the first half of 2013. It will be among the most powerful, yet most economical engines in its class.

Along with the availability of EDC dual clutch transmission for the dCi 90 engine in the first half of 2013, New Clio will mark a further step in expanding access to the driving pleasure and seamless gearshifts delivered by this responsive and frugal automatic transmission.

Over and above these engineering features, New Clio offers drivers an integrated suite of efficient solutions to help them reduce their fuel consumption and CO2 emissions:

New Renault Clio: a pledge of quality and safety

Manufactured in Flins (France) and Bursa (Turkey), New Renault Clio is built to Renault's exacting quality standards. It is an affordable model that sets high standards in quality, with nothing to fear from larger or more expensive models. New Clio is built on a new version of the Alliance's B platform which has been optimised for outstanding comfort, manoeuvrability and low noise levels.

Safety runs in the family: in 2005, Clio III became the first B-segment model to achieve a five star EuroNCAP crash test rating. Thanks to the comprehensive list of safety features it offers, New Clio, too, seeks to deliver the highest level of safety.