The Honda Fit is a five-door hatchback automobile produced by Honda of Japan, first introduced in June 2001. The vehicle is known as the Fit in Japan, China, and in both North and South America. It is called the Jazz in Europe, some parts of Asia, Oceania, the Middle East, and Africa.

Although the Fit is now one of Honda's global models, it experienced a very slow progression as it made its way around the world. The car first debuted in the June of 2001 in Japan. It was then introduced to Europe (early 2002), Australia (late 2002), South America (early 2003), South-East Asia (mid 2003), China (mid 2004), and Mexico (late 2005). A production model for the United States and Canadian markets debuted on January 8, 2006 at the North American International Auto Show in Detroit. The car was released in Canada on April 3, 2006, and in the U.S. on April 20, 2006. Unlike most Honda models, which traditionally have 4 or 5-year model cycles, the current generation Fit will remain for a longer period of time due to its late release in North America.

Depending on the region, the Fit is equipped with either a 1.2, 1.3, or 1.5 liter i-DSI engine, or a 1.5-liter VTEC engine. All four engines are based on Honda's L-series engine family. The 8-valve i-DSI (intelligent dual & sequential) engines use two spark plugs per cylinder, allowing for a more complete burn of the gasoline, thereby reducing fuel consumption, and emissions, while allowing for maximum torque at mid-range rpms. The 1.5 L VTEC engine has the typical 16-valve configuration. The engines are mated to a 5-speed manual, 5-speed automatic, or Continuously Variable Transmission (CVT), again depending on the region. Two forms of the CVT are offered: the regular, and the CVT-7. The CVT-7 has the traditional choice of gearless shifting, and a smooth, continuous flow of power with the added option of seven computer-controlled "gears" controlled by paddle shifters on the steering column. 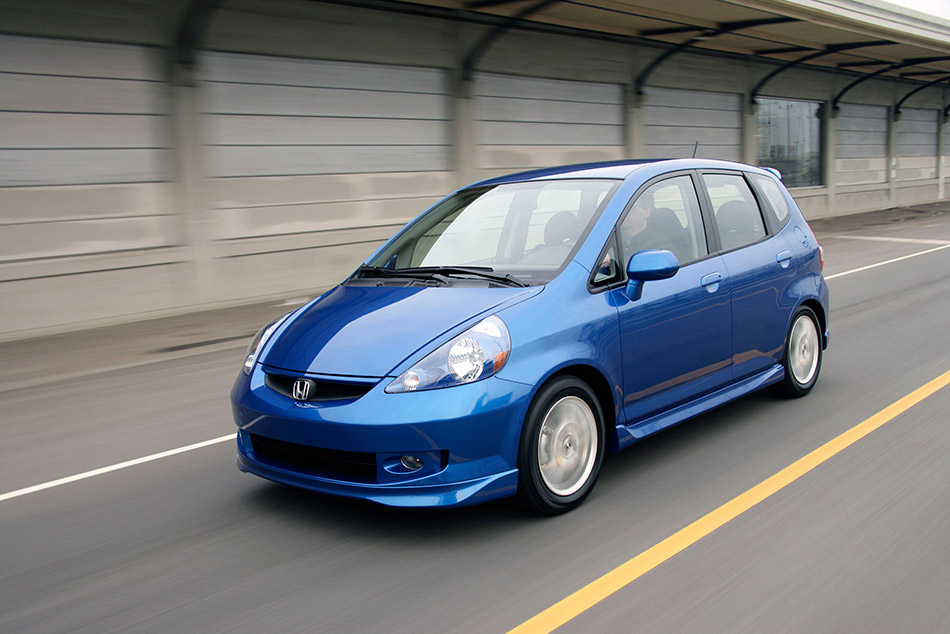 The Fit utilizes Honda's Global Small Car platform, which is also used by the Fit Aria/City (a sedan version of the Fit), the Airwave (a wagon version of the Fit Aria/City), the Mobilio, and the Mobilio Spike. One of the unique characteristics of the Fit, which is also present in the Fit Aria and Airwave, is the location of the fuel tank. Rather than placing it under the rear seats, it is located under the front seats, thereby freeing up valuable room in the back. It also allows for Honda's "Magic Seat" system, called ULTR seat in Japan, which has five distinct seating modes:

The Fit is produced in 5 factories throughout the world. Suzuka (Japan), Sumaré (Brazil), Guangzhou (China), Ayuttaya (Thailand), and Karawang (Indonesia). Models produced in Japan are Honda's home market, exported to Europe, as well the Canada and United States. The Brazilian factory supplies all of Latin America and the Caribbean. Chinese models are sold in the region, and also exported to Europe.

The Fit is marketed in different ways and has different characteristics throughout the world, depending on which region it is sold in.

Two engines (1.3 i-DSI and 1.5 VTEC) were initially offered, each with a number of trim lines ranging from the basic "Y" to the sporty "S". The 1.3 L i-DSI was available with only the regular CVT automatic. 1.5 L VTEC models are available with either the 5-speed manual, or the CVT-7. Unique to the Japanese market, the Fit is also available in 4WD.

The European market also has two engines available. The European-only 1.2 i-DSI is offered as the base model in many countries, and can only be purchased with a 5-speed manual transmission. The 1.4 i-DSI is identical to the 1339 cc 1.3 i-DSI sold in Japan, but marketed as a 1.4 L to differentiate it from the smaller 1.2 L engine (ironically, at 1244 cc, it's closer to being a 1.3, than the bigger one is to a 1.4). 1.4 L models start out well-equipped with the 5-speed manual standard and the CVT-7 available as an option.

All European models have ABS and 4-wheel disc brakes standard on every model. Side airbags are standard on 1.4 L models. In the United Kingdom, the Honda Jazz has received a serious amount of very good press. Most notably, the UK's biggest automotive service, by Top Gear, revealed that the Honda Jazz was the 4th best vehicle on UK roads, as voted by UK car owners. The enormous popularity of the Jazz has made it Honda's best-selling model in the region, comprising 30% of all European Honda sales.

Honda originally intended to name the car Fitta, but did not take a liking to word's meaning in some languages ("fitta" is Swedish and Norwegian for "cunt"), resulting in a last-minute change.

The Fit went on sale in the United States and Canada in April of 2006 as a 2007 model year vehicle. It replaced the Civic hatchback (now exclusively sold in Europe as of 2006) for North America. Honda hopes to sell 33,000 Fits in 2006 and 50,000 per year afterwards to combat rival Toyota Motor Corporation's Scion marque. The Fit takes over for the Civic as Honda's chief entry-level subcompact; the Civic continues to grow in size and price and it was reclassified as a compact (larger than a subcompact) in 2001.

In keeping with Honda's safety initiative, the Fit is offered in North America with standard side airbags, side-curtain airbags, and ABS, in addition to the mandatory front airbags. Due to differing safety regulations, North American Fits have larger bumpers than the rest of the world, resulting in a slight increase in overall length.

The Fit is offered in two variants, base and Sport. Differences are primarily limited to cosmetics and standard equipment. All models share the same 1.5 L 109 hp (81 kW) engine and standard 5-speed manual transmission. A conventional 5-speed automatic transmission is optional, instead of the CVT found throughout the rest of the world. The Fit Sport receives paddle shifters mounted behind the steering wheel when ordered with the automatic. The base model is priced at US$13,850, with the automatic transmission adding $800 and the Sport package adding $1,320.

In Brazil, the Fit has the same two engines from the Japanese models (All Brazilian Honda cars have engines imported from Japan) and there are three trim levels available. Base model LX features the 1.3 i-DSI engine (which is marketed as 1.4 in Brazil). The second model in the range, the LXL, features the same engine from the LX, but has extra equipment. The top model is the EX, which has essentially the same equipment from the LXL, but comes with the 1.5 VTEC engine. All models are available with the 5-speed manual or the regular CVT automatic. There are neither side airbags nor side curtains available for the Brazilian version. Also, the position of the radio antenna is different, as can be seen in the picture. Honda started selling the 2007 model in February 2006 with new bumpers and some cosmetic changes. The reference price is R$52,910 (around US$25,200) for Fit 1.5 EX MT on April 2006.

The Jazz/Fit offering in Australia follows the Japanese version. The base model is powered by a 1.3-litre i-dsl engine (gd1) while the high-end model is powered by the 1.5-litre vtec (gd3). In the base model the Jazz comes in manual or auto, with the cvt optional. the "red dot" on the "J" in Jazz indicates whether it is a vtec or non-vtec. The vtec version has a blue dot and red dot for the i-dsl version. The vtec model comes in vti and vti-s. The vti-s differs from vti model with the introduction of abody kit, alloy wheels, fog lamps, a side skirt, and a rear spoiler, which is optional on the vti package. The body kit for the vti-s has changed since its introduction in 2003. The picture to the right illustrates the differences. The white Jazz vti-s in the middle is a December 2003 model, while the left silver Jazz is a 2004 vti with optional bodykit, the right silver Jazz is a 2004 model vti-s.